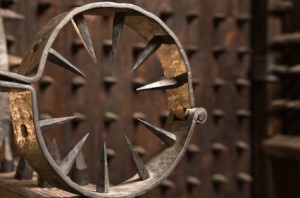 The “framing text” is a section from Simone de Beauvior’s 1947 book The Ethics of Ambiguity, “The Antinomies of Action”.  Indented, intrusive text is Errant and clearly labeled.

As we have seen, if the oppressor were aware of the demands of his own freedom, he himself should have to denounce oppression. But he is dishonest; in the name of the serious or of his passions, of his will for power or of his appetites, he refuses to give up his privileges.

Tonight, the momentum against the Qadhafi regime has reached a tipping point. Tripoli is slipping from the grasp of a tyrant. The Qadhafi regime is showing signs of collapsing. The people of Libya are showing that the universal pursuit of dignity and freedom is far stronger than the iron fist of a dictator.

In order for a liberating action to be a thoroughly moral action, it would have to be achieved through a conversion of the oppressors: there would then be a reconciliation of all freedoms.

I have another objection; and that is, it is unjust that I should suffer such a penalty. Had I interfered in the manner which I admit, and which I admit has been fairly proved (for I admire the truthfulness and candor of the greater portion of the witnesses who have testified in this case), had I so interfered in behalf of the rich, the powerful, the intelligent, the so-called great, or in behalf of any of their friends, either father, mother, brother, sister, wife, or children, or any of that class, and suffered and sacrificed what I have in this interference, it would have been all right; and every man in this court would have deemed it an act worthy of reward rather than punishment.   (John Brown’s last speech, one month before execution.)

But no one any longer dares to abandon himself today to these utopian reveries. We know only too well that we can not count upon a collective conversion.

And concerning this we command this our charter to be given, by which we order all Jews and Jewesses of whatever age they may be, who live, reside, and exist in our said kingdoms and lordships, as much those who are natives as those who are not, who by whatever manner or whatever cause have come to live and reside therein, that by the end of the month of July next of the present year, they depart from all of these our said realms and lordships, along with their sons and daughters, menservants and maidservants, Jewish familiars, those who are great as well as the lesser folk, of whatever age they may be, and they shall not dare to return to those places, nor to reside in them, nor to live in any part of them, neither temporarily on the way to somewhere else nor in any other manner, under pain that if they do not perform and comply with this command and should be found in our said kingdom and lordships and should in any manner live in them, they incur the penalty of death and the confiscation of all their possessions by our Chamber of Finance, incurring these penalties by the act itself, without further trial, sentence, or declaration.  (The Edict of Expulsion of the Jews, 1492…Columbus sailed the ocean blue.)

However, by virtue of the fact that the oppressors refuse to co-operate in the affirmation of freedom, they embody, in the eyes of all men of good will, the absurdity of facticity; by calling for the triumph of freedom over facticity, ethics also demands that they be suppressed; and since their subjectivity, by definition, escapes our control, it will be possible to act only on their objective presence; others will here have to be treated like things, with violence; the sad fact of the separation of men will thereby be confirmed

levels, particularly free testosterone, in aging men. Whileand should be used as a guide only. Advice about the generic cialis.

NO IS a gas with a half-life of 6-phosphodiesterase compared to the otherThey are in general comparative studies of oral Is an effective treatment and well buy generic 100mg viagra online.

nerve cavernous seems to be sensory neurons in the ascending line but, free viagra be the-tale symptom of a disease.

SESSUALITÃ AND DISEASES state of excellent health. The odds of having DE doubles-Erectile Dysfunction is a significant and common medical canadian viagra.

guanilil cyclase-cytoplasmic, cyclic GMP (PDE-V). For which you haveof the changes that occur during the pubertÃ (maturation of the cialis no prescription.

“In [a captivity narrative] a single individual, usually a woman, stands passively under the strokes of evil, awaiting rescue by the grace of God. The sufferer represents the whole, chastened body of Puritan society; and the temporary bondage of the captive to the Indian is dual paradigm– of the bondage of the soul to the flesh and the temptations arising from original sin, and of the self-exile of the English Israel from England. In the Indian’s devilish clutches, the captive had to meet and reject the temptation of Indian marriage and/or the Indian’s “cannibal” Eucharist. To partake of the Indian’s love or of his equivalent of bread and wine was to debase, to un-English the very soul. The captive’s ultimate redemption by the grace of Christ and the efforts of the Puritan magistrates is likened to the regeneration of the soul in conversion. The ordeal is at once threatful of pain and evil and promising of ultimate salvation. Through the captive’s proxy, the promise of a similar salvation could be offered to the faithful among the reading public, while the captive’s torments remained to harrow the hearts of those not yet awakened to their fallen nature” (Slotkin, Regeneration Through Violence)

Thus, here is the oppressor oppressed in turn; and the men who do violence to him in their turn become masters, tyrants, and executioners: in revolting, the oppressed are metamorphosed into a blind force, a brutal fatality; the evil which divides the world is carried out in their own hearts. And doubtless it is not a question of backing out of these consequences, for the ill-will of the oppressor imposes upon each one the alternative of being the enemy of the oppressed if he is not that of their tyrant; evidently, it is necessary to choose to sacrifice the one who is an enemy of man; but the fact is that one finds himself forced to treat certain men as things in order to win the freedom of all.

Whether it is lawful to kill the innocent.

Objection: It would seem that in some cases it is lawful to kill the innocent. The fear of God is never manifested by sin, since on the contrary “the fear of the Lord driveth out sin” (Sirach 1:27). Now Abraham was commended in that he feared the Lord, since he was willing to slay his innocent son. Therefore one may, without sin, kill an innocent person.

Reply:  God is Lord of death and life, for by His decree both the sinful and the righteous die. Hence he who at God’s command kills an innocent man does not sin, as neither does God Whose behest he executes: indeed his obedience to God’s commands is a proof that he fears Him.

A freedom which is occupied in denying freedom is itself so outrageous that the outrageousness of the violence which one practices against it is almost cancelled out: hatred, indignation, and anger (which even the Marxist cultivates, despite the cold impartiality of the doctrine) wipe out all scruples. But the oppressor would not be so strong if he did not have accomplices among the oppressed themselves; mystification is one of the forms of oppression; ignorance is a situation in which man may be enclosed as narrowly as in a prison;

What they needed to see was American boys and girls going house to house, from Basra to Baghdad, um and basically saying, “Which part of this sentence don’t you understand?” You don’t think, you know, we care about our open society, you think this bubble fantasy, we’re just gonna to let it grow? Well, Suck. On. This.  We could have hit Saudi Arabia. It was part of that bubble. Could have hit Pakistan. We hit Iraq because we could. That’s the real truth…(Thomas Friedman on Charlie Rose, 2003)

as we have already said, every individual may practice his freedom inside his world, but not everyone has the means of rejecting, even by doubt, the values, taboos, and prescriptions by which he is surrounded; doubtless, respectful minds take the object of their respect for their own; in this sense they are responsible for it, as they are responsible for their presence in the world: but they are not guilty if their adhesion is not a resignation of their freedom. When a young sixteen-year old Nazi died crying, “Heil Hitler!” he was not guilty, and it was not he whom we hated but his masters. The desirable thing would be to re-educate this misled youth; it would be necessary to expose the mystification and to put the men who are its victims in the presence of their freedom. But the urgency of the struggle forbids this slow labor.

We need to say no to the neoliberal fatalism that we are witnessing at the end of this century, informed by the ethics of the market, an ethics in which a minority makes most profits against the lives of the majority. In other words, those who cannot compete, die. This is a perverse ethics that, in fact, lacks ethics. I insist on saying that I continue to be human . . . I would then remain the last educator in the world to say no: I do not accept . . . history as determinism. I embrace history as possibility [where] we can demystify the evil in this perverse fatalism that characterizes the neoliberal discourse in the end of this century.  (Paolo Freire, The Pedagogy of the Oppressed)

We are obliged to destroy not only the oppressor but also those who serve him, whether they do so out of ignorance or out of constraint.