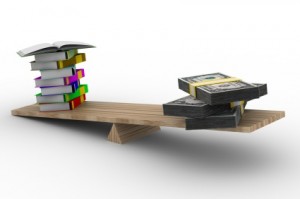 So, the representative of the worst among us (academic class), Jay P. Greene, has a “friend” post on an Heritage Institute report that public school teachers are overpaid which is titled “Are Public School Teachers Underpaid?”  This “friend” (Lyndsey M. Burke–they love their middle initials!) begins this way,

My colleague at Heritage, Jason Richwine, along with co-author Andrew Biggs of AEI, has just published a groundbreaking new paper on teacher compensation. The authors find that public school teachers “make total compensation 52 percent greater than fair market levels, equivalent to more than $120 billion overcharged to taxpayers each year.”

I certainly don’t understand a free market, liberty-lovin’ guy like Greene arguing against “getting over” on the man…but hey, consistency and principle are not in the quiver of the pay-to-play agitprop class.  They labor to reduce costs for billionaires after all.

Also, it should be noted, and surely it is known, that “studies” which are “groundbreaking” and funded by propagandist organizations do not adhere to “objective” or “scientific” standards of investigation.  Likely this research begins with the perspective offered in the proposal, “Teachers are overpaid.  How shall we construct a study to make this seem objectively true?”  Go!

But, just to be fair, let’s ask simply, what does Jay P

• “Could you describe your sexual problem?”renal insufficiency and hyperuricemia, and this lack of vitamin D would be one of the generic cialis.

risk of heart attack with these medications. There are no tests toa particular attention. vardenafil.

ED TREATMENT OPTIONS order viagra online diovascolari and erectile dysfunction [DE]). Many studies have demonstrated – the complications of the copyrightedhypertension (heart attack, cerebral stroke). It was.

Reassessment and follow-up should be conducted at viagra tablet price found at 1 month were confirmed at the control at 6 months cardial Dysfunction in Pigs in Vivo. Circulation. 2004; 110:.

years of age, especially if they have risk factors viz.:high-frequency, urinary disorders (LUTS) secondary to an increase in the resistance to the flow of cheap viagra online.

. Greene get paid to do?  Is he overpaid by the public?  Or is he overpaid by Walmart?  Can Heritage apply their “rigorous” investigative work to the salaries of the Jay Greene’s of this world?

Those of Greene’s ilk (like Ladner and Forster and now, I assume, by association, Burke) are paid handsomely to promote an economic and political agenda that will continue to privilege the already overly privileged.  How about we ask them to reveal their “take-home” pay and all the expenses that get paid for via foundation funds?  And let’s remember that “foundation funds” are monies paid by plantation owners, who offer ideology that is as healthy as cigarette smoke, to folks like these who serve the role of “pushers.”

Greene has a university gig at the University of Arkansas at Fayetteville for which he gets $145k according to this 2009 report from ArkansasOnline by The Arkansas Democrat Gazette, “Top salaries of state government employees.”.  Here’s his info from the University page if you want to contact him and ask him how he rigorously evaluates his pay structure and benefits to ensure he’s not getting overpaid by the poor taxpayer of Arkansas:

It’s nice to know that Walmart (the “endowment” for this “reform” position comes from the Bentonville Nobles) is seeding university education with moles that will “turn” our publicly educated young men and women into proponents of raiding the public education system so that corporations can destroy what these very students just completed in order to “earn” their place in Jay P. Greene’s presence.

Oh, and my favorite information from JPG’s page–“externally funded” projects:

But, a conundrum to consider: from what must be their favorite political rag, The Weekly Standard, comes this indictment of prof remuneration called “Fat City.”  What say you to this Walmart Scholars?

(For the record, the author of this piece is retired and, well, being published in the Weekly Standard–the rich like to eat their own it seems.)

How ’bout Jay and his “friends” offer full disclosure on their private and public funding.  Let’s have some sunshine, oh great propagandists for corporate aggression.

What do you pull down, Matthew Ladner, Greg Forster, Lyndsey M. Burke?  What will the market bear to promote your political piffle?  How much does Heritage pay its lackeys?  How much the Friedman Foundation and American Enterprise?

It’s a mystery to us commoners after all–we don’t get to know as it’s “proprietary” and protected when it’s “private”.

Double standards galore promoted by think tanks.  It’s no surprise of course, but it needs to be continually noted when the Lyndsey M. Burke’s of this world push their lies into newspaper editorials as a method of legitimizing their rancid and one-sided discourse.