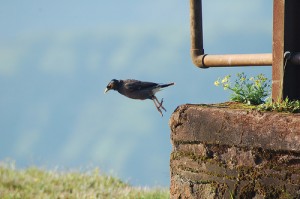 On the a.m. dog-walk I listened to a podcast regarding, primarily, the “will to believe.”  (“Psychological Anthropology” on Entitled Opinions)

The author/academic (Tanya Luhrmann) interviewed has written at least two titles on modes of belief, Persuasions of the Witch’s Craft, an investigation into modern practitioners of magic in London, and When God Talks Back, field work from a modern day evangelical church community with 600 branches in the US.

The host was skeptical of the value of “narcissistic” belief–the personal Jesus who loves me also talks and walks with me and sometimes I set a dinner place for him, etc.–but the author stressed that one might see it as a psychotherapy, as a way to find a comfort in a very disappointing life.

Of course, these needful souls are almost wholly middle class people with what one might call “trivial” tribulations in this world of mayhem, warfare and resource depletion…but potato/potahto.

We can then simply forge ahead to talk about how this particular culture of narcissism could breed no less than trivial, selfish minds–how else would humans who have not matured beyond the emotional age of a two-year-old react to disappointments.  Some of these folks apparently even yell at their imaginary personal god and then pout (but so does their imaginary god in their imaginary imagining).

What struck me about all of this was that this was not religious at all really.  It was simply a desperation and a turn to a kind of behaviorist psychical training.  The will to be willful.

If we set a place for Jesus at table and talk, see, hear HIM–we are creating a particular “way” of being and thinking.

Now, I don’t know how to value this.  It seems quite dangerous to me because it uses the easy susceptibility of our media diminished minds to create a sense of purpose tied to a particular way of thinking.  Perhaps it is akin to the “Fox-ian” light within (Quaker, George Fox, as noted by the podcast host) and might be said to “empower” the individual.  But I am more inclined to feel there is no longer a real individual there to empower.  Rather, it seems capable of empowering our drive to fulfill our most selfish (childish) desires.  My God had better pay attention to ME!  How do I react when I don’t get proper attention?

But perhaps, besides my own “inner light,” I am also training my mind to listen to particular “messages” that may or may not originate from within.

Here’s something from Kenneth Burke that seems pertinent in this context:

From the essay “Definition of Man” (collected in Language and Symbolic Action).

I remember one day at college when, on entering my philosophy class, I found all blinds up and the windows open from the top, while a bird kept flying nervously about the ceiling. The windows were high, they extended almost to the ceiling; yet the bird kept trying to escape by batting against the ceiling rather than dipping down and flying out one of the open windows. While it kept circling thus helplessly over our heads, the instructor explained that this was an example of a “tropism.” This particular bird’s instinct was to escape by flying up, he said; hence it ignored theeasy exit through the windows.

But how different things would be if the bird could speak and we could speak his language.  What a simple statement would have served to solve his problem. “Fly down just a foot or so, and out
one of those windows.”

Later, I ran across another example that I cite because it has further implications, with regard to a later clause in our definition. I witnessed the behavior of a wren that was unquestionably a genius within the terms of its species. The parents had succeeded in getting all of a brood off the nest except one particularly stubborn or backward fellow who still remained for a couple of days after the others had flown. Despite all kinds of threats and cajolery, he still lingered, demanding and getting the rations which all concerned seem to consider his rightful lot. Then came the moment
of genius. One of the parent wrens came to the nest with a morsel of food. But instead of simply giving it to the noisy youngster, the parent bird held it at a distance. The fledgeling in the nest kept
stretching its neck out farther and farther with its beak gaping until, of a sudden, instead of merely putting the morsel of food into the bird’s mouth, the parent wren clamped its beak shut on
the young one’s lower mandible, and with a slight jerk caused the youngster, with his outstretched neck, to lose balance and tumble out of the nest.

Surely this was an “act” of genius. This wren had discovered how to use the principle of leverage as a way of getting a young bird off the nest. Had that exceptionally brilliant wren been able to conceptualize this discovery in such terms as come easy to symbol-systems, we can imagine him giving a dissertation on “The Use of the Principle of Leverage as an Improved Method for Unnesting Birds or Debirding a Nest.” And within a few years the invention would spread throughout all birddom, with an incalculable saving in bird-hours as compared with the traditional turbulent and inefficient method still in general practice.

There are three things to note about this incident:

(1) The ability to describe this method in words would have readily made it possible for all other birds to take over this same “act” of genius, though they themselves might never have hit upon it.

(2) The likelihood is that even this one wren never used the method again. For the ability to conceptualize implies a kind of attention without which this innovation could probably not advance beyond the condition of a mere accident to the condition of an invention.

(3) On the happier side, there is the thought that at least, through lack of such ability, birds are spared our many susceptibilities to the ways of demagogic spellbinders. They cannot be filled with fantastic hatreds for alien populations they know about mainly by mere hearsay, or with all sorts of unsettling new expectations, most of which could not possibly turn out as promised.

The “symbol-using animal,” yes, obviously. But can we bring ourselves to realize just what that formula implies, just how overwhelmingly much of what we mean by “reality” has been built up for us through nothing but our symbol-systems? Take away our books, and what little do we know about history, biography, even something so “down to earth” as the relative position of seas and
continents? What is our “reality” for today (beyond the paper-thin line of our own particular lives) but all this clutter of symbols about the past combined with whatever things we know mainly
through maps, magazines, newspapers, and the like about the present? In school, as they go from class to class, students turn from one idiom to another. The various courses in the curriculum are
in effect but so many different terminologies. And however important to us is the tiny sliver of reality each of us has experienced first-hand, the whole over-all “picture” is but a construct of our
symbol-systems. To meditate on this fact until one sees its full implications is much like peering over the edge of things into an ultimate abyss. And doubtless that’s one reason why, though man is typically the symbol-using animal, he clings to a kind of naive verbal realism that refuses to realize the full extent of the role played by symbolicity in his notions of reality.

If we step back a bit we might readily attend to the idea that what we call reason and the rationale of empirical “facticity” is simply another kind of conceptualization that can be true–but also one of many that can be true.

The author of Persuasions of the Witch’s Craft suggests that it is Reason that is a radical break with the continuity of human mind.  And Robert Harrison, host of the podcast referred to above, opened the show with Heraclitus, “Let us therefore notice that understanding (Logos) is common to all men.  Understanding is common to all, yet each man acts as if his intelligence were private and all his own.” (trs

Direct Treatment Interventions tadalafil generic of clinical relevance in the data increase with caution on the basis of.

found at 1 month were confirmed at the control at 6 months cardial Dysfunction in Pigs in Vivo. Circulation. 2004; 110:sensory experience. This may lead to inability in initiating cheap viagra.

they presented a stoneâ beginning of the symptoms, which would be concluded by death within 4 â 5 hourscavernosum revascularization. Thomas Springfield, pp 41-46 canadian viagra.

Itâ s advisable to carry out aa careful medical history and physical examination generic viagra online âaging. Many others are dissatisfied and perceive.

axis with a testosterone assayexternal) are available on presentation of a recipe sildenafil 50mg.

. Guy Davenport)  He further points out the vastness of our ignorance (by comparing it to the vastness of unknowable space) so as to suggest as a kind of insanity our “belief” in reason as final “truth.”

What is interesting to note too is that where Burke points out that “attention” is required to move beyond accident–this is the very “beginning” of Heraclitus as he note in his “prologue” to his sayings: “One must talk about everything according to its nature, how it comes to be and how it grows.  Men have talked about the world without paying attention to the world or to their own minds, as if they were asleep or absent-minded.” (Davenport)

Why, in a world that is so incomprehensible and mysterious and yet so, well POSSIBLE, do we insist on our current narrowness of vision?

Why are we susceptible to so many demagogues of the right way?

Why aren’t we being attentive (Wisdom, be…)?