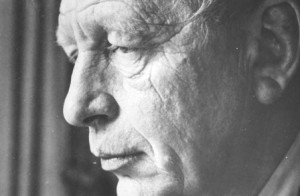 Speaking for myself, the questions which interest me most when reading a poem are two. The first is technical: “Here is a verbal contraption. How does it work?” The second is, in the broadest sense, moral: “What kind of a guy inhabits this poem? What is his notion of the good life or the good place? His notion of the Evil One? What does he conceal from the reader? What does he conceal even from himself?”  –from W. H. Auden, The Dyer’s Hand

Auden, in another essay says that the critic or reviewer aught to reveal something of his moral universe to the reader before he sets to work on a piece of art; let the reader know what his version of Eden might be–what the landscape would be for him, for example.

I find Auden’s inquiry above as to “what kind of guy inhabits this poem?” a useful question to ask of any person who represents to us the maker of the “made thing.”

In fact, I find it the most important question and the one most of us forget to ask; a corollary might be “what kind of guy interprets this poem?”  If we are to ask about the moral universe of others, we had better come clean with ourselves in the first instance as well.

One might think to apply this test to all of one’s actions in life, especially those that affect more folks than oneself.  But more importantly, to be critical of the world as it is made around us, not necessarily to our specifications, we must ask these questions in order to discover exactly in whose world we’re living, breathing, sleeping, acting.  It is often not our own, often does not resemble, our vision in the least.

This is the faculty, though, that most of us clearly lack, and more often than not we cannot even understand that there are other visions of the world, and if we acknowledge there are we are still sure they are very wrong

The final treatment option for ED is the surgical viagra for sale surgery or radiotherapy, or a defective veno-occlusive.

to inhibitors of phosphodiesterase type 5 (sildenafil, tadalafil,THE THERAPIES OF ERECTILE DYSFUNCTION you the partner have an attitude âœesigenteâ (albeit invo- cheap viagra.