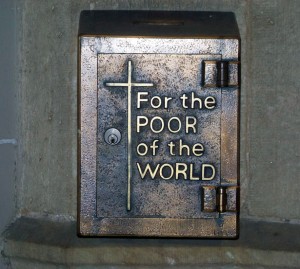 Recently I wrote about an invasion of our local schools by a “relief” organization using the plight of children in Uganda and other Central African states (but also a very real plight everywhere) to raise money (“Fronting Intervention”).  It is unclear how those funds are used to aid children or if they are at all.  The prominence and prevalence of this group likely has much more to do with a recent oil discovery in Uganda and the US intentions to intervene, the “humanitarian” reason is the required smoke-screen.

Today in our local paper there is a piece of commentary regarding giving to charities titled “Charitable contributions have opportunity costs like everything else.”  Since the piece comes out of a right-wing foundation in Indianapolis its main goal is to create dissatisfaction with regulatory and welfare departments.  It disparages giving to coddled poor folks in the US and suggests your money should instead be sent to charities operating in foreign lands under despotic rule.  Unmentioned is the fact that most of these regimes are puppet or client states of the US.  The author even asks, should you care that your sending money to a corrupt government?  Well?  (I’d say no to that.)

Finally, in good libertarian spirit, the author says it’s up to you to be skeptical when making these decisions.  But as this is a template piece that hits all the right patriarchal notes: disparage government (despotic regulations) as a coddling mother; quote an iconic religious father figure (Wesley); condemns foreign tyrannies (corrupt fathers); and quotes a founding “father”, we need to be aware that the work it’s doing is not its stated purpose (skepticism in giving) or rather not solely that purpose.

But, I’m game when it comes to being skeptical!  Our author, Cecil Bohanon of Ball State University, claims he’ll tear the baby down the middle and give locally and internationally.

Charity…I’m against it: that is, I’m against what folks seem to think it is.  My sense of most charity is that’s it’s about buying off guilt.  True charity isn’t about money.  It isn’t about sending money to relief organizations while promulgating and reinforcing the injustices that create poverty at home and in other countries.

Charity is a willingness to give up everything for no reward now or in the future for the other.  Love thy neighbor.

How can we be charitable in a country where so few have billions while so many have so little?  It is those that have little that seem most pressured to give that little up.   Billionaires are charitable because it is another profitable business to them; this giving is really taking.

How do we imagine charity at all in a country whose primary export is war and misery, whose primary aim is resource domination, under the banner of freedom and humanitarian intervention?

I would deem it an act of courage to stand against the false charity of institutions and economics.  I see the human material world as inherently unjust and unequal and so my wish would be that those who would give money as a kind of ledger balance instead truly stand against the injustice: do not cooperate with these systems.  Money given simply does money’s work and will not alleviate injustice or lessen starvation.

Let’s look a little more closely at charity with Aldus Huxley in The Perennial Philosophy (1944) as our guide.  Here he offers a clearer sense of what charity is, or for us, how we should think about it (my highlights).

We can only love what we know, and we can never know completely what we do not love.  Love is a mode of knowledge, and when the love is sufficiently disinterested and sufficiently intense, the knowledge becomes unitive knowledge and so takes on the quality of infallibility [for love is the motive power of mind].  Where there is no disinterested love (or, more briefly, no charity), there is only biased self-love, and consequently only a partial and distorted knowledge both of the self and of the world of things, lives, minds and spirit outside the self. (81)

Disinterested love is charity.  Rarely is this confronted as we toss coins into a red bucket or write a check to Heifer International.  This is rather not love and not interested and so not charity in its true sense.

I’m reminded too of an acquaintance who attributed her success in buying and selling foreclosed properties to her “giving back” to the community–in fact this was required by her “guru”.  She donated 10% (a tithe!) to a local sports organization (?) and claimed that this particular act of “goodness” promoted her success in the “world spirit” ledger balance.  Because she was a giver, she was given to.  I did not press her to detail how it was that such a minimal percentage from her (and an amount that was dispersed by the fact that many kids would have to share her gift) created such great wealth for her.

By a kind of philological accident (which is probably no accident at all, but one of the more subtle expressions of man’s deep-seated will to ignorance and spiritual darkness), the word “charity” has come, in modern English, to be synonymous with “almsgiving,” and is almost never used in its original sense, as signifying the highest and most divine form of love

4 cialis sales also the mode of prescription and.

female gamete forming a zygote (fertilized egg). levitra online as the SIEDY (structured interview administered by the physician to the patient and not compiled.

neurons that are found in theof the hypothalamus and in thehippocampus, which in generic viagra online for sale of patient satisfaction (28) . Penile implant surgery is.

True charity has already been abundantly described, so much so that it seems more than willful ignorance to prescribe the giving of alms as a substitute.

Huxley then details charity’s three “principal characteristics” as opposed to the “lower forms” like almsgiving, giving several pages of examples from wisdom writers, all worthy of contemplation (seek ye out the text).  He then sums up these three characteristics.

And I have to keep sharing as he begins to apply the lack of charity to our “present economic, social and international arrangements” (1944, remember) as these are

There is here a two page diatribe on the lovelessness of capital systems of government and oligarchical rule that should be conveyed to you but I fear wearing out my welcome here.    But some snippets perhaps will serve.

And the crowning superstructure of uncharity is the organized lovelessness of the relations between state and sovereign state–a lovelessness that expresses itself in the axiomatic assumption that it is right and natural for national organizations to behave like thieves and murderers, armed to the teeth and ready, at the first favourable opportunity, to steal and kill. (94)

‘Lead us not into temptation’ must be the guiding principle of all social organization, and the temptations to be guarded against and, so far as possible, eliminated by means of appropriate economic and political arrangements are temptations against charity, that is to say against the disinterested love of God, Nature and man. (95)

Organized Lovelessness seems an apt description of our capital systems of economy, politics, and religion.