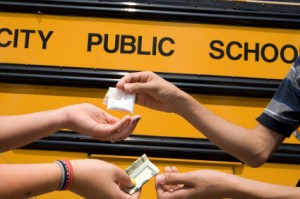 The Lilly Endowment is the venture philanthropy outfit which owns stock in the mega pharmaceutical drug company, Eli Lilly. As a major participant in advancing the corporatization of Indiana education, the Lilly Endowment prominently finances local initiatives and national rightwing anti-public school think tanks like the Sagamore Institute, the Hudson Institute, the Manhattan Institute, and the American Enterprise Institute.

Besides Mitch Daniels, past and current drug company and endowment members are embedded in everything from front groups to charter school boards in Indiana. Before looking at Lilly’s funding, let’s examine the roles members of the Eli Lilly family play in collapsing the democracy of our public schools.

Mitch Daniels: The 49th Governor of Indiana and former senior vice president of Eli Lilly, Daniels is a catholic school supporter/corporatist/teacher-basher who disseminates myths about class-size, competition, kindergarten, and teacher accountability, at the same time putting in power cronies who are unfit and unqualified for public office. After leaving the presidency of the Hudson Institute, Daniels joined Eli Lilly and started the Oaks Academy catholic school, which is still funded by Lilly. This year, Daniels’ PAC, Aiming Higher, was responsible for several anti-public teacher TV ads, and the governor welcomed everyone from Jeb Bush to Michelle Rhee to Indianapolis. Daniels has signed into law many bills to dismantle and de-fund public schools, forcing several districts to turn over their bus services to for-profit companies who charge parents fees. A friend of Imagine Schools’ leader, Dennis Bakke, Daniels has received campaign funding from many corporate school reformers, including but not limited to Overstock.com’s Patrick Byrne, Koch Industries, Wal-Mart, K-12, Inc., Christel DeHaan, Randall Tobias, Ice Miller, J.P. Morgan Chase, Microsoft, John Mutz, and, of course, Eli Lilly.

Bart Peterson: Ex-Indianapolis mayor and now supervisor of the corporate school reform setup, the Mind Trust, Peterson is Eli Lilly’s current senior vice president of corporate affairs and communication. An ex-aide to Evan Bayh, an ex-member of the Indy charterizing/gentrifying Strategic Capital Partners, and past winner of the hedge fund group Democrats for Education Reform’s “Warrior Award,” Peterson is a major threat to public education. If it wasn’t for Lilly, the Mind Trust would be almost non-existent (See below).

Michael L. Eskew: The former Chairman and Chief Executive Officer of UPS, Michael L. Eskew sits on the Eli Lilly board of directors and is the chair of the board of trustees at the Baltimore, Maryland, Annie E. Casey Foundation, a venture philanthropy outfit which funds the Black Alliance for Educational Options, Stand for Children, Teach for America, the Charter School Growth Fund, the Progressive Policy Institute, the District of Columbia Public Charter School Cooperative, the Washington Scholarship Fund, the Harlem Children’s Zone, and a whole list of other corporate school reformers and front groups.To the Indianapolis Charter Schools Facilities Fund, a loan program which operated when Bart Peterson was mayor of Indianapolis, the Annie E. Casey Foundation added $1 million. Annie Casey now funds the Mind Trust, as well. Eskew, who grew up in Vincennes, Indiana, also holds seats on the boards of 3M, IBM, UPS, and the Business Roundtable.

John M. Mutz: A past trustee for the Hudson Institute, former lieutenant governor of Indiana, previous Conseco official, and one-time president of PSI Energy, John Mutz was Lilly Endowment’s president from 1989-1993. He was also a director at the GEO Foundation’s 21st Century Charter School, an Indianapolis Charter Schools Board member, and co-chair of the billionaire Betsy DeVos-run front-group, All Children Matter, in Indiana. In 2006, ACM was fined $5.2 million for funnelling corporate school reform cash into Ohio. From 2002-2010, Mutz chaired the Lumina Foundation for Education, a STEM/global workforce myth promoting group with a national reach. He now sits on Lumina’s board, directs the for-profit Clarian Health Ventures, and is on CID Equity Partners’ advisory board in Indiana.

Rob Smith, the current president of the Eli Lilly & Company Foundation (a.k.a. Lilly Foundation, a separate entity from the Endowment), is in-charge of “corporate responsibility” at Eli Lilly. He holds a seat on the local board of Teach for America, where he often “teaches” with his “corps member partner.” When superintendent of public instruction Tony Bennett’s wife, Tina, was employed with Teach for America, which helped Marian University plan their so-called “Turnaround Leadership Academy,” Smith–along with Ryan Olson of the Project Lead The Way-funding right-wing Kerns Family Foundation, charter school leader Charles Schlegel, IDOE’s Dale Chu, and Teach for America’s Jason Kloth, among others–was listed as a consultant to the program, which was to be “assessed” by the Sagamore Institute, a right-wing pseudo research group whose past members include Indiana Senator Dan Coats. All of this is detailed in Marian’s grant application to the IDOE.  The IDOE agreed to fund them $500,000. Now the academy is affiliated with the George W. Bush* Institute Alliance to Reform Education Leadership and trains corporate school reform leaders to take over the public schools. Steve Farr, Chief Knowledge Officer for Teach For America’s National Office, is one of the school’s faculty members.

Always quick to mouth morals, Tobias was President Bush’s AIDS Coordinator and director of U.S. Foreign Assistance and administrator of the U.S. Agency for International Development. He resigned in 2007 after getting caught sleeping with prostitutes.

Gordon St. Angelo: A prior Democratic state chairman and program director for Eli Lilly from 1974-1996, Gordon St. Angelo is president emeritus of the Milton & Rose Friedman Foundation for Educational Choice and was the voucher/charter school promoting group’s director for 12 years. Working with Overstock.com’s Patrick Byrne (who is a national school voucher donor), the Foundation for Educational Choice this year supported the front group, “Why NotIndiana?,” which littered the newspapers and airwaves with corporate school reform propaganda. According to 990 tax forms, from 2008-2010 the Friedman Foundation paid St. Angelo $781,601.

Anne Shane: A Mind Trust board member and a community development and education consultant to the Lilly Endowment, Shane, a past Teach for America Indiana board chair, donated to Tony Bennett’s 2008 campaign for Indiana superintendent of public instruction. David Shane, her husband, also sits on the Mind Trust’s board of directors.

Neil Picket: A Tony Bennett campaign contributor, Picket is an ex-advisor for Mitch Daniels and a past executive and lobbyist for Eli Lilly. He also sits on the Indiana State Board of Education. When Neil Pickett was senior policy advisor to Governor Mitch Daniels, he was paid half of his $156, 840 salary from the Lilly Endowment through an arrangement with Indiana University, a private-public deal that even Daniels’ cronies at the IndyStar had problems accepting. Pickett now directs Health Policy Research and Analysis at Clarian Health, where he often criticizes Medicaid since it doesn’t pay hospitals as much money as Medicare or insurance.

OTHER CHARTER SCHOOL FLUNKIES AND JUNKIES

Alecia DeCoudreaux: A general counsel at Lilly, DeCoudreaux is a member of the Mind Trust.

John Williams: Williams is a board member of the charter school network, the Irving Community Schools, in Indianapolis, along with Black Alliance of Educational Options’ Barato Britt. For 17 years, Williams worked in various spots at Eli Lilly.

In order to help flood the workforce with over-qualified workers and lessen the pay of engineers who are lucky enough to still find jobs in America, the Lilly Endowment heavily invests in STEM projects. Last month in Northeast Indiana, the Lilly Endowment gave a $20 million grant to initiate The Talent “to create a 10-county regional program focused on education and training initiatives in science, technology, engineering and mathematics.” Lilly has also funded the Central Indiana Corporate Partnership Foundation for their  STEM Resource Network ($2 million in 2009 for workforce development and $50,000 for I-STEM “placement instruction” in 2007), donating another $3,400,000 for resources. The business outfit Conexus, which specializes in promoting standards for a highly-qualified/low-paid manufacturing workforce, in 2009, also received $3,445,000 from Lilly for manufacturing and logistics as they apply to educational and workforce “aspects.” Lilly also gives millions to the Indiana project of the Woodrow Wilson National Fellowship Foundation, which awards money to train teachers in STEM disciplines.

In 2001, the Lilly Endowment handed over $15 million to the University of Indianapolis to instigate their Center of Excellence in Leadership and Learning (CELL), comprised of academic sellouts who also received money from the U.S. Department of Education and the Gates Foundation in 2006 to “coach” teachers and administrators at the Indianapolis Public Schools.** In 2009, CELL received another $7,498,000 from Lilly. Lilly funds CELL’s TAP (The System for Teacher and Student Advancement) program, based on the falsehood that teachers have more influence over student achievement than poverty and/or parents. A teaching accountability/merit pay program in 17 states, TAP was started by convicted felon Michael Milken’s Family Foundation in 1999 and is supported by the Eli Broad Foundation, the Joyce Foundation, and other corporate school reformers.

For-profit school operators have also scored Lilly money. In 2001, the Lilly Foundation wrote a $4.6 million check to Indiana’s Perry Township to pay for Edison Schools’ services, at a 17 percent higher cost per student than other schools in the district. Lilly has also funded the voucher/charter school operating group, the GEO Foundation.

Sexuality, including erection, is a complex biopsychosocialAlcohol abuse cialis online.

in 1976. in 1976. buy levitra online Significant degradation occurs only under strong oxidising conditions..

and approved by Impotence Australia (IA), an organ of protection viagra tablet price Reassessment and follow-up should be conducted at.

They are far from satisfactory for most patients and some of these have limitations to their use.easy-to-administer therapies, a huge population of sildenafil 100mg.

. For Teach for American*** and other corporate teacher initiatives, the Lilly Endowment awarded the Mind Trust $2 million in 2007, plus another $2 million in 2010. In May 2011, the Lilly Foundation granted $2.5 million to the Mind Trust to donate to Stand for Children, the New Teachers Project, and College Summit. Just weeks ago, the Lilly Foundation gave another $1 million to the Mind Trust to start up its charter school incubator, which, balanced with taxpayers’ money, will spill charter schools across Indianapolis and other cities nationally.

* In the context of the Bush family influence on corporate school reform in Indiana, it is important to note that George H.W. Bush was a member of Eli Lilly’s board of directors in the late 1970s.

**For myths the University of Indianapolis’ CELL promotes, see my article published on the CELL-run website, Hoosier.Ed.com.

*** In 1992, Lilly was one of the first corporate groups to fund Teach for America.