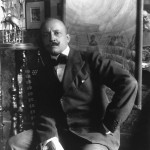 How does this sound as a description of our world? Aside from #17 below which makes no sense in this list, I’d say this pretty much describes the present.

1. Acceleration of life to today’s swift pace. Physical, intellectual, and sentimental equilibration on the cord of speed stretched between contrary magnetisms. Multiple and simultaneous awareness in a single individual.

2. Dread of the old and the known. Love of the new, the unexpected.

3. Dread of quiet living, love of danger, and an attitude of daily heroism.

4. Destruction of a sense of the Beyond and an increased value of the individual whose desire is vivre sa vie, in Bonnot’s phrase.

5. The multiplication and unbridling of human desires and ambitions.

6. An exact awareness of everything inaccessible and unrealizable in every person.

7. Semi-equality of man and woman and a lessening of the disproportion in their social rights.

8. Disdain for amore (sentimentality or lechery) produced by the greater freedom and erotic ease of women and by the universal exaggeration of female luxury. Let me explain: Today’s woman loves luxury more than love. A visit to a great dressmaker’s establishment, escorted by a paunchy, gouty banker friend who pays the bills, is a perfect substitute for the most amorous rendezvous with an adored young man. The woman finds all the mystery of love in the selection of an amazing ensemble, the latest model, which her friends still do not have. Men do not love women who lack luxury. The lover has lost all his prestige. Love has lost its absolute worth. A complex question; all I can do is to raise it.

9. A modification of patriotism, which now means a heroic idealization of the commercial, industrial, and artistic solidarity of a people.

10. A modification in the idea of war, which has become the necessary and bloody test of a people’s force.

11. The passion, art, and idealism of Business. New financial sensibility.

12. Man multiplied by the machine. New mechanical sense, a fusion of instinct with the efficiency of motors and conquered forces.

13. The passion, art, and idealism of Sport. Idea and love of the “record”.

14. New tourist sensibility bred by ocean liners and great hotels (annual synthesis of different races). Passion for the city. Negation of distances and nostalgic solitudes. Ridicule of the “holy green silence” and the ineffable landscape.

15. The earth shrunk by speed. New sense of the world. To be precise: One after the other, man will gain the sense of his home, of the quarter where he lives, of his region, and finally of the continent. Today he is aware of the whole world. He little needs to know what his ancestors did, but he must assiduously discover what his contemporaries are doing all over the world. The single man, therefore, must communicate with every people on earth. He must feel himself to be the axis, judge, and motor of the explored and unexplored infinite. Vast increase of a sense of humanity and a momentary urgent need to establish relations with all mankind.

16. A loathing of curved lines, spirals, and the tourniquet. Love for the straight line and the tunnel. The habit of visual foreshortening and visual synthesis caused by the speed of trains and cars that look down on cities and countrysides. Dread of slowness, pettiness, analysis, and detailed explanations. Love of speed, abbreviation, and the summary. “Quick, give me the whole thing in two words!”

17. Love of depth and essence in every exercise of the spirit.

And so it has come to pass.