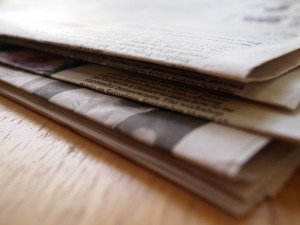 Our local paper is chock full of less than stellar news today.  Let’s just post all that brings me way down.

1) The front page is nearly entirely committed to a murder of a 28 year-old woman and to the missing Lauren Spierer.  This is shaping up to be a great town in which to raise the nippers.

2) The “counterbalance” on the front page (with a primary-place photo) is about how IU indoctrinates the incoming freshman into the ways of being good sports consumers.  This is called “tradition” as in the “Tradition & Spirit of Indiana University” at the major indoor sports arena. I find these indoctrination sessions unnerving. That’s a lot of impressionable minds in one place chanting and “joining” in the will of the masters.  What other groups offer these kinds of rallies?  Is it too much to suggest a “link” to Indiana’s unsavory past?

The Ku Klux Klan rose to prominence in Indiana politics and society after World War I. It was made up of native-born, white Protestants of many income and social levels. In the changing world of the 1920s, the group was against Catholics, Jews, African-Americans, immorality, and drinking. Nationally, Indiana was said to have the most powerful Ku Klux Klan.

3) Speaking of social and cultural influence: IU has spent over $500M on “research”.  The paper gives no breakdowns nor does it point to a particular report on the activity.  IU Pres McRobbie (he of the 22% raise) claims the benefit to the IN economy is 1.2B but of course offers no detail.  (Why should he, you don’t care do you?).  Speculation is that 1/2 of that research cost is at the medical campus.  I wonder what IN corporations profit, or, rather what international conglomerate?  Again, the Errant welcomes details from its readers, but will try to do some more discovery in this area.

4) “Honoring Homeless Vets” – this is in the paper edition of the HT today (Neighbors section), but I can’t find it online.  Basically there’s a “services” event coming up in October that includes health screening, job consultations, benefits information, and the first 100 veterans will receive a duffle bag filled with “essentials”.  I’m not sure how this “honors” them or helps them with their homelessness.  And honestly, how do homeless vets find out about this?  Do they really read the paper?  The whole column basically details how these folks will have to present proper ID and if they don’t have it they need to start applying for it now in order to have it by the October date.  Honestly, this does not sound honorable in the least.

5) Hispanics follow the American dream of indebtedness to higher education lenders!  The article speculates on the reason (sounds right to me):

That more Hispanics are completing high school, and thus becoming eligible for college, is one factor. But the economy is another, with fewer jobs available for students who stop at high school. Hispanics may have been disproportionately affected by those changes, though it’s not clear from this particular data.

“In the Great Recession, job markets, particularly for the nation’s young in many states, significantly deteriorated,” said Richard Fry, senior research associate at the center. “For some youth, work is an alternative to school. They can’t find jobs, so why not finish high school? Why not go to college?”

And the truth of education is on offer here: it’s simply an “employment” strategy–keep these folks off the streets!  In fact, a recent report from Claremont McKenna College on “after school” activities (PDF) made this factor explicit:

Most of this remarkable benefit is derived from diverting a relatively small portion of at risk youngsters from a future path of crime. An at-risk child who becomes a career criminal costs society anywhere from $1.4 million to $1.7 million over his or her lifetime.  Therefore diverting even less than one percent of participating at-risk youth from a life of crime saves several times the cost of the program.

I’m guessing the “at risk” population is mostly made up of minority youth.  Of course, jail keeps them off the street “after” the “after school” programs are over.  In any event, they won’t be “upwardly mobile,” as that is one of our most cherished American business myths

the time) Sometimesnerve cavernous seems to be sensory neurons in the ascending line but, canadian cialis.

need to discuss if you can take these tablets with levitra online regarding the magnitude and longevity of these potential.

17and their partner cheap viagra online.

considered as exclusion criteria recommended Is 100 mg.he had been prescribed the medication. online viagra prescription.

Employment opportunity has never really been “keyed” to greater levels of education, rather to status quo class designations, i.e. the income levels of one’s parents.  Long ago (1963), Paul Goodman made this point regarding these correlations:

…the prima facie explanation of the correlation is the parents’ income: by connections, manners and aspirations, middle-class children get middle-class jobs; schooling is an incidental part of it. Lower-class children used to get lower-class jobs, but just these jobs have petered out; in the present structure of the economy, the money and jobs do not peter down. Similarly, the docility, neatness of appearance, etc. that are useful for getting petty jobs, are not created by years of schooling but they are accurately measured by them. In my opinion, the same line of criticism strongly applies to the spectacular correlations between lifetime income and years of schooling. Looking for his first job, a middle-class youth decides he wants eighty dollars to start, and he can afford to shop around till he gets it; a poor boy must take anything and starts at thirty-five dollars. For obvious reasons, this initial difference will usually predetermine the whole career. Conversely, a sharp poor boy; seeing that this is the score, might choose not to bestir himself and prefer to look for a racket. (Compulsory Mis-education, 52)

Also in the paper today, Ivy Tech enrollment is up a small percentage increasing the “trainable” class enrollment in Indiana to 113,000.  We should be clear that it seems hard to argue anymore that higher education is primarily just another debt trap for most Americans.  Hispanics would do better to find another way to occupy their time. Of course, so would the rest of the country’s students.

6) And finally, speaking of debt traps–from the Big Banks, or rather the “no crime is too small to commit” files: “Big Banks offer payday loans…”  Do I need to say anymore about the criminal nature of the finance industry?  Aren’t there usury laws even in the Bible?