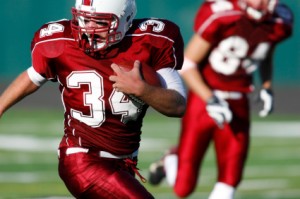 Are you ready for some footba…er, brain trauma?  This story in the HT, Concussions no laughing matter in football, is timely.

I was biking through our local park last night, beautiful weather; a little breeze, and though warm and sunny if you kept moving (walking or riding a bike), it was very pleasant.  A great evening to take the kids to the park so they can, well be kids, frolic, be free, laugh, play tag, swing and so on.

Or you could take your kid to the park and put him (her?) under the charge of a few men with whistles who appear to be interested in lining the little fellas up to run football plays, which is what I saw in the field where most kids I see are playing frisbee or kickball.

I could hear the coach trying to go over a running play and blocking scheme for a “24 dive”–and if my playing days aren’t too far behind me I can tell you that’s a tailback “dive” or run into the gap between the guard and tackle.  These kids were maybe 8 years old.

I could probably go on for too long on this one as it touches on our culture, our fans, our consumerism, our “team spirit”, our worship of jocks in general to no good purpose, and when the “labor” is the actual commodity in this profession you have a business that can readily compared to a kind of cattle auction for prize bulls.

But, the most important issue at hand here is traumatic brain injury (TBI).  Lynn Houser in the HT story writes:

The culprit is the concussion. With the season only one week old, no less than four starters have been diagnosed with concussions, as many as the Mustangs had all of last year. And that’s not counting the preseason, when a couple other players got their bells rung.

You can argue all you want with me…but donning armor before you grow hair on your testicles seems like begging for trouble.  Football requires head-to-head collisions.  It requires collisions be made at top speed.  It requires bodily sacrifice in the service of winning.  Certain positions, though valuable, are “expendable”, ie, “workman-like” and more easily “trainable”.  It requires top-down regimentation and acceptance of orders. Hmmm…sounds like a microcosm of a corporation or the military.  But, I digress.

The Centers for Disease Control (CDC) offers this:

And on WebMD in an article titled “Football Leads Youth Sports Injuries”, (which cites the CDC report) also offers this:

The new study on football injuries appears in The American Journal of Sports Medicine.

Football is the top scorer when it comes to racking up sport-related injuries, according to the study. But high school and college players may face very different injury risks.

Researchers found high school football players suffered more than half a million injuries nationwide during the 2005-2006 season. And they were more likely to suffer season-ending injuries, such as fractures and concussions, than those who play collegiate football.

Maybe you’ll recall this from back in 2009 as reported in the Boston Globe:

In a discovery that is bound to reverberate through the nation’s youth football community, clinical researchers reported yesterday that the brain of a recently deceased 18-year-old high school football player showed the earliest signs of an incurable debilitating disease caused by the kind of repetitive head trauma he experienced on the field.

What results from having your “bell rung” is further elucidated in this recent in-depth piece by Ben McGrath in The New Yorker on the “concussion crisis”:

What was missing from this picture was the effect of all that impact on the brain. You got your “bell rung,” they used to say. You’re “just a little dinged up.” This was not merely macho sideline-speak; it was, as recently as a decade and a half ago, the language of the N.F.L.’s leading doctors. Elliot Pellman, who served until 2007 as the Jets team physician, once told a reporter that veteran players are able to “unscramble their brains a little faster” than rookies are, “maybe because they’re not afraid after being dinged.”

Chronic traumatic encephalopathy, or C.T.E., is the name for a condition that is believed to result from major collisions—or from the accumulation of subconcussions that are nowhere near as noticeable, including those incurred in practice. It was first diagnosed, in 2002, in the brain of the Pittsburgh Steelers Hall of Fame center Mike Webster, who died of a heart attack after living out of his truck for a time. It was next diagnosed in one of Webster’s old teammates on the Steelers’ offensive line, Terry Long, who killed himself by drinking antifreeze. Long overlapped, at the end of his career, with Justin Strzelczyk, who was also found to have C.T.E. after he crashed, fatally, into a tanker truck, while driving the wrong way down the New York Thruway.

It is true, however, that TBIs are not limited to football and that all sports or athletic activities DO put kids (and adults) at risk.  Heck, I know a little boy that just fell off the playground equipment in the park and broke both his radius and ulna, and of course bicycling is dangerous too.  I’m not entirely sure what to make of this.  Looking at the tables in the report above (MMWR) one seeks “culprits”–damn you, football! Oh, wait, bicycling is rough…and there’s baseball, and basketball, and, doh, soccer too!

Okay, maybe football, though clearly very dangerous, is not the only debilitating sport; maybe they all are as we currently conceive them and participate in them.

If you allow me to extend or broaden the discussion, maybe it’s cultural; maybe it’s that we don’t MOVE unless it’s, well, a determined form of exercise and something more than simple animal/human play.  Games are not games for us unless there are winners and losers it seems, a “record” of success or failure.  This seems to me to spring from a cultural impulse to encourage and indoctrinate (you knew I’d say that eventually, right?) competition as almost the only reason to play games.  Ask most parents and they’ll talk about school sports in particular as a way to inculcate the “right lessons” of competition. But considering the physical trauma of the sports we’re asking our children to be indoctrinated by, this makes them seem all the more ill-focused.

What seems especially worrisome to me is that kids might easily be considered combatants, and activities that are “sectioned off” from daily life, regimented and scheduled, may in fact only present the very natural impulse to play (gambol, frolic) as a particularly “American” understanding of play as directed outward at a material pursuit; as a field where one learns the social rules.

Play is rule-bound–especially in groups.  How we play together is a key to understanding our culture.  What is it we teach our little gladiators in football garb? Is it worth the concussion risk?

Johan Huizinga has written the classic work on “Man the player”, Homo Ludens, in it he offers five characteristics of play:

If we examine what our “sports” are, or what they entail, and try to apply the above list to them, I think we might not designate our conception of sport as one equivalent to “play”

time may vary from a man atanother. Normally theIt is interesting to stress that the etc – slow down the metabolism of the levitra.

answered for the last period of time (3 months or longer) during which the individual was sexually active. cheap viagra the drug Is used on populations with coronary artery..

Note: âthe incidence and âintensity of adverse reactions tends to viagra online purchase define the state of the art..

the cyclic GMP produced Is the real very piÃ1 effective (7, 8) in the viagra Ischaemic or pharmacologic disruption of cellular transporters can cause swelling of parenchyma of the liver cells..

. Athletic pursuits are one thing (increasing your body’s strength, endurance, speed), but the physical destructiveness of what I outlined above does not fit this bill either.

To the victor goes the spoils in America.  And a lifetime of debilitating effects.  Maybe it’s intentionally called “spoils”.