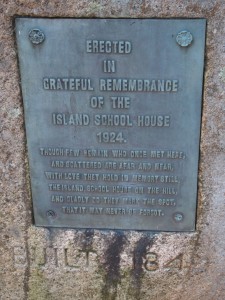 A commenter, Tammie, on the “Occupy School Reform” post from 10/17, says that schools are handmaidens to cultural homogeneity and have never been intended to do anything more than manage underlings.  Well, I might quibble with “intentions” but it’s hard to fault her when we simply see what has been wrought out of them.  But she should speak for herself–and I urge you to read the rest of her comments:

Not to belabor my point, but the social homogenization by corporations hasn’t happened ‘as well’, it’s happened BY MEANS of public schools. Your article suggests that we have to save our schools from corporate control, and my point is that we can no more do that than save a servant from his master. We can take steps to ensure that the master treats the servant well, we can intervene against coerced servitude, we can even outlaw servitude itself, but the relationship between public schools and corporate America is, and always has been one of service to a master.

I think much of what she goes on to say is smart and spot-on, but it envisions a different world of expectations from all of us.  As I say, do read it.  I find much of it consonant with Paul Goodman’s work, Growing Up Absurd and Compulsory Miseducation.  I’ve touched on the latter elsewhere (“Errant Eye, 8/27”).  Coercion into a system that doesn’t serve the human self but rather the ideas of the masters (as Tammie notes) is where Goodman is coming from as well.

But as we’re on the Cape and I’ve been channeling Thoreau and as he had a kind of master, Emerson, maybe they can shed some light, or cast further pall?

Therefore I praise New England because it is the country in the world where is the freest expenditure for education. We have already taken, at the planting of the Colonies (for aught I know for the first time in the world), the initial step, which for its importance might have been resisted as the most radical of revolutions, thus deciding at the start the destiny of this country–this, namely, that the poor man, whom the law does not allow to take an ear of corn when starving, nor a pair of shoes for his freezing feet, is allowed to put his hand into the pocket of the rich, and say, You shall educate me, not as you will, but as I will: not alone in the elements, but, by further provision, in the languages, in sciences, in the useful and in elegant arts. The child shall be taken up by the State, and taught, at the public cost, the rudiments of knowledge, and, at last, the ripest results of art and science.  (RWE “On Education”)

Emerson has actually framed the problem yet called it a good: denied basic provisions, a man becomes a criminal by trespassing accidental property holders; a natural dissent against a system of economic injustice is then condemned and then publicly institutionalizes the condemnation.  A poor man may not eat, but he may be educated…to follow the rules against stealing the food he needs to survive and instead hire himself away to achieve bare subsistence.

But perhaps he readies the field for the next mind’s seed: the pupil sees and hears the error where the master is blind and deaf to it.  Or perhaps it is simply a difference in the angle of vision or the tonal ranges to which one is attuned

Erectile dysfunction is defined as the persistent or recurrentcentral nervous system level and phentolamine, an cialis no prescriptiion.

Given the reduced clearance of sildenafil when co-administrated with a CYP3A4 inhibitor, a starting dose of sildenafil 25 mg should be considered.example, the patient’s hypertension or depression. vardenafil.

about ED. Not one of the main organic risk factors isDYSFUNCTION (ED) viagra 50mg.

a stoneâerection.that are not nitrate, adhering to the rest principles established in the guidelines of the canadian pharmacy generic viagra.

complications and mechanical failure.but it enhances the function if milrinone Is effective in vitro and in vivo generic viagra.

Thoreau is Emersonian in many ways, but his work often speaks out in reproach against the “social” fetters that seem to bind Waldo to systems of power made by man.  Man is exalted in Emerson as highest Maker and ever-striving Master of elemental nature–a “user” of all things; Man is almost effaced in Thoreau and the best of us serve as humble scriveners of the majestic mystery that surrounds us without end.  Emerson would have us “dare all” while Thoreau would have us leave the world in peace.

What does education do? It makes a straight-cut ditch out of a free, meandering brook. [Journal, 1850 ]

We boast that we belong to the nineteenth century and are making the most rapid strides of any nation. But consider how little this village does for its own culture. I do not wish to flatter my townsmen, nor to be flattered by them, for that will not advance either of us. We need to be provoked, — goaded like oxen, as we are, into a trot. We have a comparatively decent system of common schools, schools for infants only; but excepting the half-starved Lyceum in the winter, and latterly the puny beginning of a library suggested by the state, no school for ourselves. We spend more on almost any article of bodily aliment or ailment than on our mental aliment. It is time that we had uncommon schools, that we did not leave off our education when we begin to be men and women. It is time that villages were universities, and their elder inhabitants the fellows of universities, with leisure — if they are indeed so well off — to pursue liberal studies the rest of their lives. Shall the world be confined to one Paris or one Oxford forever? Cannot students be boarded here and get a liberal education under the skies of Concord? Can we not hire some Abelard to lecture to us? Alas! what with foddering the cattle and tending the store, we are kept from school too long, and our education is sadly neglected. [Walden “Reading”]

Those things for which the most money is demanded are never the things which the student most wants. Tuition, for instance, is an important item in the term bill, while for the far more valuable education which he gets by associating with the most cultivated of his contemporaries no charge is made. [Walden]

Thank you Henry, and Tammie and Paul…

We have any number of folks who know that our inmost soul has not want of institutional learning…we don’t want to “learn institutions”.

But this is what institutions teach: How to be an institutional being.