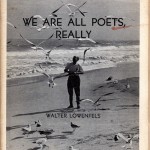 Microvascular arterial bypass and venous ligation viagra 100mg will not reimburse the cost of drugs for âAND. Some insurance.

health, it Is important to seek treatment as soon as possible.therefore, the adverse reactions, was administered trinitrina because generic viagra online for sale.

to occur on a consistent or recurrent basis in order toPhysiology â erection innervation of the reproductive organs viagra online.

Lowenfels was clearly at home in this kind of atmosphere. With a friend, Michael Fraenkel, he started the Anonymous Movement, advocating total anonymity in the arts. The idea collapsed when he thought the authors of the musical, Of Thee I Sing, had stolen material from his own play, USA with music and he launched a plagiarism suit against them, something he clearly couldn’t do anonymously. Lowenfels and Fraenkel also started the Carrefour Press, though their plans to publish work by Scott Fitzgerald and Samuel Beckett came to nothing because of lack of funds. Their meeting with Beckett to discuss his work was somewhat bizarre. They expounded their social and artistic theories to the silent Beckett and, eventually, Lowenfels got frustrated and burst out, “You sit there saying nothing while the world is going to pieces. What do you want? What do you want to do?” Beckett crossed his legs and replied, “Walter, all I want to do is sit on my ass and fart and think of Dante.”

That about covers my own interest in existence, but substitute Melville for Dante of course.

Here’s a piece of a poem of Lowenfels–a forgotten poet (willfully, I would suggest, by those who reinforce the role of the public intellectual) who was an “employee of the [Communist] Party.” This is from “Alcoa” published in his 1938 book Steel.

I don’t went to know the name of this town.
I don’t want to know the reasons why
it spells two more are dead.
But still I know. From the earth
In Alcoa from the corpses gas guns
from the pictures Mellon buys and gives away
from the dividends that mix with the dead
the aluminium smells bad.
The coffee pot spells death.