Let’s give Henry a prefatory statement to center our thinking before we dither about in the malleabilities the minded self:

The penny-post is, commonly, an institution through which you seriously offer a man that penny for his thoughts which is so often safely offered in jest. And I am sure that I never read any memorable news in a newspaper. If we read of one man robbed, or murdered, or killed by accident, or one house burned, or one vessel wrecked, or one steamboat blown up, or one cow run over on the Western Railroad, or one mad dog killed, or one lot of grasshoppers in the winter, – we need never read of another. One is enough. If you are acquainted with the principle, what do you care for a myriad instances and applications?*

I came across the beginnings of an interesting conversation at the blog “Californica” about reading, “I Am Ryder”; or, My Life as Somebody Else. Here’s the set-up by blog author Jason Tougaw,

Does reading a novel change you? Can a novel make a person more compassionate or cosmopolitan, as philosopher Richard Rorty suggested in the late eighties? Or more foolhardy, even delusional, as Victorian public intellectual Margaret Oliphant was fond of warning her contemporaries?**

I am inclined to believe that one can deepen a mode of contemplation as well as broaden the capacity to engage in that mode if one studies words. Study, not “read.” This, if you feel me (do you feel me?), means spending time with a piece of writing. Some writing deserves your time, some doesn’t. We seem to be privileging the speed of ignorance (for example, Spritz) over the snail’s pace to wisdom. So be it. So it goes.

Also I am pretty sure that “ideas” can influence us no matter where we happen upon them.

Perhaps we can use an example that is probably fairly well-known, or it might once have been. This event was “immortalized” in film–Alfred Hitchcock’s Rope (and if we are contending that literature can change us, what of film? Surely it has a stronger claim as the most convenient manipular in history). I’m referring to the Leopold and Loeb case.  Here’s the Wiki story:

The duo was motivated to murder Franks by their desire to commit a perfect crime. 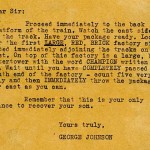 Here is the apparent motive (also from Wikipedia):

Because of Leopold’s strong interest in Nietschze, Leopold and Loeb believed themselves to be Nietzschean supermen (Übermensch) who could commit a “perfect crime” (in this case, a kidnapping and murder). This theory suggested that superior minds could overcome the laws and regulations that bound the average man. The average man was inferior and was unimportant to those of superior qualities. Because of his high intelligence, Leopold thought that he needed to show just how superior he really was. This theory fed Leopold with the will to prove himself to be a truly brilliant mind. Before the murder, Leopold had written to Loeb: “A superman … is, on account of certain superior qualities inherent in him, exempted from the ordinary laws which govern men. He is not liable for anything he may do.”

Now poor blind, mad, syphlitic Nietzsche gets blamed for so many things, but this murder reminded me more of the instigating action of Dostoyevski’s Crime and Punishment which

focuses on the mental anguish and moral dilemmas of Rodion Raskolnikov, an impoverished ex-student in St. Petersburg who formulates and executes a plan to kill an unscrupulous pawnbroker for her cash. Raskolnikov argues that with the pawnbroker’s money he can perform good deeds to counterbalance the crime, while ridding the world of a worthless vermin. He also commits this murder to test his own hypothesis that some people are naturally capable of such things, and even have the right to do them. Several times throughout the novel, Raskolnikov justifies his actions by comparing himself with Napoleon Bonaparte, believing that murder is permissible in pursuit of a higher purpose.

Nietzsche and Dostoyevski corrupting all the susceptible minds the world over. But what we might see here is that if we actually read past the first pages of Fyodor’s novel we are drawn into a mind in a diseased psychological state, and while we might not be “changed” we are certainly given ample opportunity to recognize how egregiously wrong Raskolnikov is.

The hypothesis set forward of the superior man being “above” all social and moral strictures crumbles into madness.

Where is the bulwark against “bad” thinking? Is a novel “useful” for that?

I’d guess not. That is, I think we’re already a “self”–a constructed response engine–who may or may not react to particular “ideas” and or “impulses” to action based on that construction. But, can we alter that construct? Beats me? If, as I say above, study deepens our “mindfulness” does it expand the boundaries of the construct or will that study only work in ways to conform and bolster that bounded nutshell of conscience?

I’d like to think that time spent reading deeply, writing with attention, and sharing with the voice in relation to other voices writing and reading, CAN alter those limits of self that form defensively and protectively with “survival” as criterion.

That brings me, finally, to why I started writing. And so finally to the Thoreau quote that begins this piece. The mind on newsprint is exactly NOT the mind I would want to promote. This is the same mind on blogs (sorry, blog-writing self, but you know this is just for you anyway), on magazines, on CNN, on app-news, and so on. That is a shallow thought process.  But listen, I read today in the novel Raintree County (1948) by Ross Lockridge, Jr., a discourse on “the Common Man” made more common by “news” (and you can hear this is an expansion of Thoreau’s assertion).

Meanwhile, we have the Indianapolis News-Historian to remind us that we’re living in a new age, the age of the Modern Man, or perhaps still better, the Common Man–common because he’s becoming commoner all the time and more and more like every other man. The reason for this is that through the free press and the blessings of literacy he shares the atrocities  of mankind more fully with his fellows. The newspaper is the true epic of this modern Odysseus, the Common Man. He’s the most exciting hero of all time. The world’s his oyster, and he opens it every morning over his coffee. In the space of a few minutes, he lays the Atlantic Cable, wins and loses wars in Europe, abdicates thrones, treads a tightrope over Niagara, and rapes an unidentified woman on a deserted part of the New York waterfront….He lives a life of gilded ease on Fifth Avenue in New York and makes a pile in the stock market….The jungle fascinates him, and he buys a sun helmet and bustles off to Darkest Africa, where he emerges into a clearing, bland face smiling, hand outstretched, and greets himself, bland face smiling, hand outstretched, after living two years among the aborigines….All this the Common Man accomplishes by the expenditure of a penny, while sitting squarely on his prosaic beam in the Main Street…sucking on a five-cent cigar.

We are only a bundle of responses. We can choose what affects us; we can choose what we receive. That is, we can seek out the “word” we want to shape us. Or we can let it wash over us uncritically; let it fulfill that first self-protective framework–bend it to our bigotries.

We are always coming up with the emphatic facts of history in our private experience, and verifying them here. All history becomes subjective; in other words, there is properly no history; only biography. Every mind must know the whole lesson for itself, — must go over the whole ground. What it does not see, what it does not live, it will not know. What the former age has epitomized into a formula or rule for manipular convenience, it will lose all the good of verifying for itself, by means of the wall of that rule. Somewhere, sometime, it will demand and find compensation for that loss by doing the work itself. (my emphasis)***

That “former age” is within us–a rule for manipular convenience. We tend to act within our ignorance; we DO what we’ve received and believe. We will kill, we will enslave…we have been shown the way. But with study, with time, with inaction, with observation, perhaps that can be changed. But the news serves us bricks to renew the wall of that rule.

Let Henry chastise us and let us be washed clean.

“Pray tell me anything new that has happened to a man anywhere on this globe”- and he reads it over his coffee and rolls, that a man has had his eyes gouged out this morning on the Wachito River; never dreaming the while that he lives in the dark unfathomed mammoth cave of this world, and has but the rudiment of an eye himself.*

Even this rudimentary eye has been splintered and atrophied by incessant, meaningless, news.

*Walden, Chapter II, “Where I Lived, and What I Lived For.”

1. It’s hard for me to imagine anyone who is incessantly on Facebook has any idea of “audience” for postings. In this sense there is no slipping into the consciousness of others or even understanding it. BUT, one might assume that all one’s “friends” are “of the same mind” by representing “selective” relations. Therefore one is posting to oneself. Likely if one wishes to create responses then there might be a thought to what one posts. That is, if one is needy of response, one makes a post that elicits intrigue. That is manipulative and ego-driven still.

2. This made me think of two perhaps radically different novelists of the 19th century. George Eliot, who did intend her novels to influence the thinking of her readers–that is, lead them to considered moral perceptions; and Herman Melville, whose work demonstrates “thinking in action” or the analogizing self.

3. Sub-vocalizing as a necessary aspect of “change.” I wonder if the insistence on social media and the “medium” that supports the distribution of digital content creates “thoughtless” reception because it is so much more readily “gulped” and not “chewed.” Take for instance the new app “Spritz” wherein the “reader” simply stares at a fixed point and the words appear in succession at that point. The purpose is to increase speed without loss of “retention” though I’m not sure what “retention” means in terms of “understanding” or thinking. No time to pause–open your eyes and be force fed the words. A pate orientation.