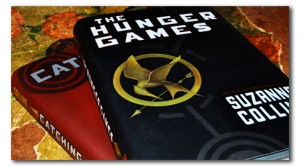 So, I’ve finished The Hunger Games.  The trilogy.

I’m not sure what to say about it.  I found it always vaguely unsatisfying and too easy with its killing.  It tries to subvert this by the fact that our heroine lives in a world of killing–from the beginning Katniss is essentially most at home as a hunter.

Here’s the takeaway: The world is full of shitty people and you can’t trust anyone and possibly not even yourself.

Of course that’s the world-view of Katniss Everdeen.

At the very least, though we always suffer from believing in the realism of our dystopias (yes, people are that way!), the books thrust the neurotic confusion of the protagonist into the forefront of every situation.  Katniss represents the mind unsure of itself outside of its primary context.  So, Katniss in the woods with Gale knows the rules.  Katniss anywhere else is clueless.  This is its very real, though ambivalent, strength: it shows you a mind struggling to make sense out of the senseless with almost no grounding in or understanding of “the good.”

For example, in the rebellion Gale does not split hairs.  If he is ready to kill in one situation to further the end that is the defeat of the Capitol then he makes all killing that serves this end equivalent.  Every hair on Katniss’s head is split by comparison.  We are always in the presence of her confusion.  She seems to always be seeking a JUST kill.  And though I don’t think she ever finds it, or is probably never meant to find it, she keeps on killing.

By contrast, Peeta is never sullied.  He is devoted to one cause, Katniss.  Her protection is his one end to achieve at any cost.

I think it is likely a failure that he is not made to kill to protect her.  He is always a part of the killing action without ever striking an intentional blow.  This leaves him pure in a way that is probably not remotely possible given the constant killing in the books.

The end being that one repressive government is replaced by another.  They are only two different types of repression enforced by specific oppressions.  But this is, ultimately, a difference that doesn’t make a difference.

The good die, the bad die.  The good kill, the bad kill.  Fashion and entertainment are a locus of the shallow mind (agreed).  A government that dictates your actions is only expedient, a shackle to individual conscience, and so is a failure as regards human liberty.

The soldier is applauded who refuses to serve in an unjust war by those who do not refuse to sustain the unjust government which makes the war; is applauded by those whose own act and authority he disregards and sets at naught; as if the state were penitent to that degree that it hired one to scourge it while it sinned, but not to that degree that it left off sinning for a moment. Thus, under the name of Order and Civil Government, we are all made at last to pay homage to and support our own meanness. After the first blush of sin comes its indifference; and from immoral it becomes, as it were, unmoral, and not quite unnecessary to that life which we have made. (Thoreau, “On Resistance to Civil Government”)

The only good is unmediated, disinterested human relations.  Katniss and Prim (her sister); Katniss and Gale in the woods before they are corrupted by the motivations of the sate; Peeta and his role as protector of his heart’s passion.

It seems a horrific waste of about 1,200 pages to expose 40 million minds to a terrible vision of the future to try to convey this message.  Thoreau did it without the fantasy bloodlust in about 9,000 words.