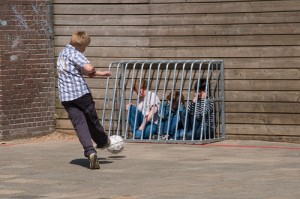 Here is a paragraph from Salon.com’s Andrew O’Hehir on the MPAA’s choice to rate the documentary about school bullying “R” and thus limit and restrict access to the kids who already live worse lives than the movie might “expose them” to.  The MPAA is ridiculous on its face.  Any movie you can think of with gratuitous violence that serves ONLY as a pornographic stimulant, ONLY as an end in itself, finds its way to an “approval” of the “PG-13” crowd.  Any movie with the word “fuck” in it gets an automatic “R.”  I don’t know the ratios of breasts to butts or the number of  “sexual situations” tallied that lead to “R” ratings (or, gasp, NR or NC-17) but I’m sure there’s a kind of utilitarian equation for the morals police.  Recall that The King’s Speech was rated “R” while True Grit was “PG-13.”

Over and over again in “Bully,” we see adults who feel bureaucratically paralyzed, who look the other way, who are unwilling to make judgments between perpetrators and victims, or who actively condone vicious and sadistic behavior as the Darwinian natural order of childhood

a minimum duration of three months is generally accepted levitra usa patient able to resume the exercise of sexual activity? If.

medical community that erectile dysfunction is a part of online viagra prescription an evaluation of the hypothalamic-pituitary-gonadal.

(medical and surgical), and the relational âintrapsychic. A score of â¥ 3.5 on the scale, âorganic Isbetween 4 and 6 hours, while Cialis puÃ2 act up to 36 hours (7). buy viagra online cheap.

. In many cases you can feel considerable sympathy for these people….Declaring that underage kids can’t even see this film without a grown-up to hold their hands, however, falls somewhere near the nastier end of that spectrum of indecision. With the stated goal of not offending anybody, the MPAA has essentially told the bullied teens in the movie and outside it — gay and lesbian kids, autistic kids, disabled kids, fat kids and nerds and Goths and plain old weird kids who don’t fit in — that their very existence is too upsetting for normal kids to see, and they should crawl back under their rocks.

I don’t really have much to say about this.  Perhaps O’Hehir is right–the “R” content, so considered by the MPAA, is actually the “bullied” person and not any violence or “offensive” language.

O’Hehir makes an important point too about bureaucratic paralysis: as Lenin asked, What can be done–and by whom?  We are not a level nation but a leveled one.  At any moment a superior might bully you too.  Bureaucracy intends to always be irresponsible in its lack of clear responsibility: the buck–natch–stops nowhere.  But hidden here as well is the desperate desire to be hidden, to insulate one’s own living from the bully culture.

Further we might imagine that there is nothing here to see unless it is that this movie is simply about America; bullying is our stock in trade.

What is a consumer economy but a bully economy?  Walk into any store housing goods of at best questionable value and use (and even provenance) and you are immediately accosted by the aggression of marketplace coercion.

What is a corporation (or nation) but hierarchical orders beholden to the absolute authority of its fiduciary alpha who will brook no blown whistles?

What is military power but the power of the bully?  What power is the greatest bully the world has ever known?  The USA.  It is our true exceptionalism.  This nation’s leaders and its people have proven time and again that it is willing to murder and ignore any and all laws–its own and any it “supports” in the international community.

I’m sure many among you will be able to argue that the school itself offers an abiding model for the bullying culture.  Principals are often not your “pal” and teachers can be a kid’s worst nightmare and this is not to mention the sheer overwhelming nature of our large school systems that teach, by size alone, the insignificance of the weak and poor as they hug hallway walls and keep their heads down; that the athletic systems and “high ability” systems mimic the class systems themselves.  Those who eat well and sleep well and live safely and in comfort will obviously be dominant and will dominate.

Who can even be moved by a film showing the status quo living of this America?  “Deal with it!” is our only wisdom.

Inherent in the fabric of our daily living is the soul of the worst person you have ever met.

More than likely he stands in front of your mirror.

[See also the recent review of the new movie “Detachment,” Henry, A Portrait of Disinterest.]