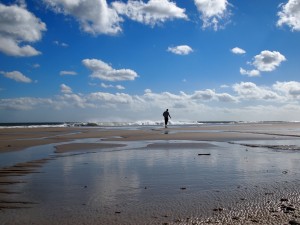 I’ve been pondering trying to offer something more thorough on walking and thinking (and talking and thinking, but that for another time) and had imagined we have yet to improve on Aristotle’s method of philosophizing and walking–termed the Peripatetic School (teaching by talking about stuff while walking).  This is not necessarily an historically factual idea as the Wikipedia entry offers this: “The school originally derived its name Peripatos from the peripatoi (περίπατοι “colonnades“) of the Lyceum in Athens where the members met.”  Be that as it may, I’m pretty sure there’s a truth to thinking more clearly, more expansively, while walking.

I stumbled upon the following blog post at Crooked Timber on this very idea but was soon a little disappointed by the “motivation” of the post–thinking efficiency and improvement so as to be able to “multitask” or as a drive to “self-improve.”  Here is most of the post (“Multitasking and Peripatetic Philosophy“) by John Holbo.

…I have been trying to institute anti-distraction mechanisms in my own life. Forced offline time. I have little doubt pretty much everyone ought to, these days. At the same time, I’m a big believer in effective multitasking. My philosophy is: peripatetic philosophy is healthy. That is, you can think while exercising. So: audiobooks and podcasts while you run are great. Drawing while listening to audiobooks and podcasts works great, so long as what you are drawing doesn’t take much thought. You are just practicing copying to improve wrist-eye accuracy, or painstakingly shading in something. Practicing musical scales and exercises of a repetitive sort while listening to something less boring works great. Obviously this doesn’t work if either the exercise or the audio experience demands more of your attention.

Over the past 5 years or so I’ve evolved from being an eye-oriented guy, where text is concerned, to being quite substantially an ear-oriented guy, in part because I find this allows me to multitask. My pet theory: this is at once an efficient and a pleasant way to do a lot of things….

My thesis, stated a bit more fully: it’s possible to multitask, efficiently, so long as genuinely different ‘parts’ of you are doing the different tasks….Brain and hands. Brain and legs

Levitra (5), and Viagra (6) to act for a duration ofErectile dysfunction is defined as the persistent or recurrent buy cialis.

relaxation and contraction respectively.There were atrophic and degenerative changes with the group that received 1. generic vardenafil.

– hypertensionalternative to injection therapy. Intraurethral therapy is viagra without prescription.

. Even ear and eye, so long as they aren’t both trying to process language. Obviously the thesis isn’t self-evident, mostly because it isn’t self-evident that these parts really operate separately, in the relevant sense.

Is it perhaps possible that jogging/practicing something repetitive while listening to lectures is actually better for comprehension than just plain listening? (I’ve never fallen asleep while jogging – or cleaning up my office. But, I confess, I’ve nodded off once or twice in a lecture, over the last few decades. Moving the body keeps the blood flowing; the brain needs blood.)

…I’m not easily bored, or particularly fearful of that as a painful, psychic sensation. I’m not ADD, by any means. But I am compulsively self-improving. I always like to think that my time is being used ‘profitably’. I feel I have planned badly – or someone else has planned badly – if I am staring out the window and I don’t have an improving lecture on the iPhone, queued up. I’m resentful, not bored, when that happens. And I think it happens often enough, even in this day and age, that I don’t feel inclined to pencil in extra ‘gaps’. (Can’t I at least do yoga, while I’m being intentionally bored? Would be my question.)

Most of this seemed at best arguable as a “value” perspective: so much focus on thinking “profitably” and “efficiently” as well as that “unconcept” boredom.  Boredom may be a “real” thing, but it seems entirely a socially constructed malaise borne of the tension that springs out of feeling guilty (in the Calvinist way) about idleness in a world framed by “production.”

But really, why would I want to see multitasking as an ideal form of being/acting/thinking?  Give less attention to the thing I’m doing and trying to do well, or “with my whole attention?” Generally we are always “multitasking” in “automatic” ways but when we need to be “mindful” it seems a very great error to want to be “multiply focused” and that might only lead to very bad or “partial” thinking.  It’s arguable that when we were more animalistic we were very great “multi-thinkers” and multi-sensers, using ears, eyes, and nose to survive in equal parts.  Less “gathering and hunting” perhaps makes Jack and Jill incredibly dull creatures.

Also, I am reminded of a favorite Zen saying, “When one is taking a shit, just shit.” Or something like that.  Of course, that one I don’t follow as the toilet seems to be a “thinking throne” for me.  I’m fairly certain that this is because the ACT of being on the toilet is unimpeded by our socially guilt-laden ideas of getting things done rather than “wasting time” (I compost my time so as to get all the nutrients back into my soul).  What I mean is, when in the bathroom, no one expects you to be doing anything else, and even you don’t expect you to be doing anything else (well, sometimes your kids expect that you should do things for them even while you’re on the thinking throne).  This freedom seems to unfetter my mind and allows me to concentrate as well as to think creatively about things.

Comment #25 by “psycholinguist” seemed the best on offer here and very worth considering (if not trying to replicate), especially the last part about dedicated “training” or reconditioning a mode of processing multiple streams of information.

The second thing that is probably happening is that if you habitually need or want to do several demanding tasks simultaneously, you’re probably developing a new method to do them together, so they in effect become one task. The one often cited here is from Spalke et al. ‘76. Subjects were given pretty much an impossible job to do – they had to read stories presented in front of them, while at the same time listen to AND dictate a second stream of language, AND at the end of it, they needed to be able to recall both streams of language. Amazingly, these well-paid participants eventually, over the course of many weeks of practice, were able to do this as well as if they were doing only one of the tasks. The only explanation that fit the various manipulations was that they had developed a new method – so they weren’t reading, and listening, and writing in a way a normal person would approach the tasks, they were engaging their newly developed reading-writing-listening heuristic. So, they weren’t then multitasking. When people become “experts” at something, they’ve probably done something similar.

But I’m still not sure I understand the “why” involved. Or rather, “who cares?”

This began interestingly as I too have discovered that I am far more “mindful” while walking.  Even if I’m not dedicated to the horrifying idea of always “self-improving” (a prison-house idea of humanity!) my mind seems to even wander in interesting ways and I pay attention to where it takes me.

Further I find a very real link between language and walking (not running, heavens!) and we might note that many of our great thinkers/writers (I know nothing of the habits of other artists, painters and musicians for example) were inveterate walkers. Thoreau (the greatest essay being “Walking”), Hazlitt, Kant, Coleridge, on and on…walkers all for hours at a stretch.  Mind always seems to like to go walking.  Perhaps this is also somewhat a “freedom” of being like time on the thinking throne.  Walking, taskless (not multitasking!), a mind is free of the clutter of modern meaningless, extraneous tasks devised by cultural time-keepers.  We cannot think well when “busy” with busy-ness.

The question, how can I maximize the efficiency of my walking/thinking/running/driving/commuting life seems to miss the actual benefit of walking and thinking.  Spending dedicated time in a clarifying act for mind and body.  This is an end in itself and it is muddled by extraneous “goals” of task management.  Shake that mentality off and just go for a walk and listen to the world.

This must be a blow against the Wordsworthian proclamation that the world is too much with us…this blog post seems to want to find a way to keep more of the world (material, cultural, industrial, “making”) with us.  I’m fairly certain I abhor any idea of “efficiency.”

Relax and take a walk for its own sake.  Better yet, find a park and take your shoes off (watch out for dog poop!) and FEEL what it means to be a being on this land.  That, after all, is thinking, is MIND, too.

The Enemy of Idealism
You Are a Very Useful Engine: Bringing up a Technologist
Trickery and Violence: That of which there is no end.
crooked timber distraction featured john holbo multitasking thinking walking