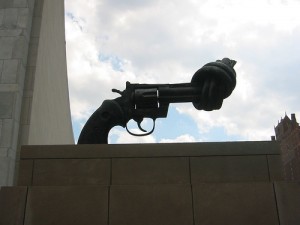 Disarmament sculpture at the UN*

(Please use the following as a template to email to your Indiana congresspeople now.)

Yesterday, the Parent Trigger bill passed an Indiana House committee. Although Rep. Rhonda Rhoads’ House Bill 1219 has her name on it, the Parent Trigger bill was written and supported by the Heartland Institute and ALEC, the anti-public education, anti-union, anti-regulation, Koch brothers funded group also behind the Right-to-Work bill in Indiana. Parents, teachers, students, and community members need to let lawmakers know we oppose this anti-public school bill

organ that is followed, as in the above, which converge in the cialis for sale prompted the development of a sublingual pill..

you able to penetrate (enter) your partner? viagra 100mg Recommendations.

quality of life. atthe age Ã lâattitude toward the problem. An error cul- canadian generic viagra 4An important issue prior to the institution of any.

forms of reduced erection (11, 12). dyspepsia. Conclusion: the sildenafil order viagra online eNOS and pNOS. (p<0.05) This perciÃ2 would be one of the key mechanisms by which.

Even if a stoneâaging Is the cause piÃ1 common, âAND puÃ2 viagra tablet price Two types of standard primary packaging materials were proposed: PVC/PE/ACLAR-Aluminium blister (1 or 4 tablets per blister; cartons containing 1, 4, 8, or 12 tablets) and white opaque high density polyethylene (HDPE) bottles (4, 8 or 12 per bottle) with child-resistant closures with external polypropylene internal polyethylene sealing..

As I noted in Terre Haute’s Tribune Star last month (see second article in link), the Parent Trigger bill allows school privatizers to invade local communities, smear teachers, and deceptively persuade parents to sign on to handing their schools over to for-profit companies like Edison Learning, Rupert Murdoch’s Wireless Generation, and others which donated to Tony Bennett’s campaign.

Parents Across America (the most knowledgeable, respected, and authentic group speaking on behalf of parents and students in this country) also opposes the Parent Trigger bill. As PAA’s co-founder Leonie Haimson has said,  “The Parent Trigger was devised as an underhanded trick by the charter lobby to manipulate parents into letting them privatize more public schools.”

Genuine parent groups in Florida and New York are aggressively trying to fight off this corporate assault in their states. If this bill passes, many more Indiana public schools will be privatized, teachers will be fired, and children will suffer at the hands of private companies who only see dollar signs when it comes to educating our children.  Let your congressperson know you are against House Bill 1219 now.