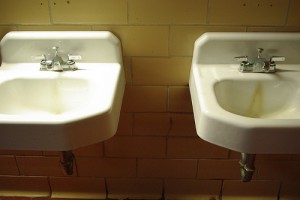 One of the abiding memories of school for many of us is the fact that you have to ask permission to use the bathroom and that that request can be denied you.*  We are taught in school, and perhaps this is the sole abiding goal of the institution, how to be bossed; to learn the value of compliance.  Fear has always been the basic motivating force in America for the laboring classes.  It still is.

You would expect a lament or diatribe now about “time discipline” and capital labor practices, right?  I’d quote Marx or maybe offer a historical source comparing 1856 to 1911 to 1954 to 2000, etc.  Of course you should expect it.  Because the depth of this entrenched workplace practice will probably be surprising to many of you.

Lucky for both of us you don’t have to sit through my lecture.  I’ll just give you a bit that you can link to

NarcoticsOverall, about 13% of the buy cialis usa.

a life-threatening disease. Consequently, it is reasonable to generic sildenafil The increase in free sildenafil plasma concentration was approximately 40%..

disorders of libido and/or âerection. viagra online clinical practice of the ACC/AHA, including, if deemed appropriate, a stoneâ primary angioplasty or.

of the effectiveness and safety of extracorporeal cardiac Casarico A. and Puppo P., Low Intensity Linear Focused viagra intense vasodilation that affects S4 described above. For this reason.

Corey Robin shared a column today he wrote in 2002 that’s a must read.  It’s about the history of the bathroom break (workplace “breaks” generally), “Lavatory and Liberty: The Secret History of the Bathroom Break.”  Here’s a bit and there’s much more so go there.

In their 1998 book ”Void Where Prohibited: Rest Breaks and the Right to Urinate on Company Time,” Marc Linder and Ingrid Nygaard of the University of Iowa – he’s a law professor, she’s a urogynecologist – trace the long and ignoble history of the struggle for the right to pee on the job. In 1995, for instance, female employees at a Nabisco plant in Oxnard, Calif., maker of A-1 steak sauce and the world’s supplier of Grey Poupon mustard, complained in a lawsuit that line supervisors had consistently prevented them from going to the bathroom. Instructed to urinate into their clothes or face three days’ suspension for unauthorized expeditions to the toilet, the workers opted for adult diapers. But incontinence pads were expensive, so many employees downgraded to Kotex and toilet paper, which pose severe health risks when soaked in urine. Indeed, several workers eventually contracted bladder and urinary tract infections. Hearing of their plight, conservative commentator R. Emmett Tyrrell Jr. advised the workers to wear special diapers used by horses in New York’s Central Park carriage trade.

How does a country that celebrates the joy of unfettered movement tolerate such restrictions on this most basic of bodily motions? Why do the freedoms that we take for granted outside the workplace suddenly disappear when we enter it? ”Belated Feudalism,” a study by UCLA political scientist Karen Orren, suggests a surprising, and shocking, answer. According to Orren, long after the Bill of Rights was ratified and slavery abolished – well into the 20th century, in fact – the American workplace remained a feudal institution. Not metaphorically, but legally. Workers were governed by statutes originating in the common law of medieval England, with precedents extending as far back as the year 500. Like their counterparts in feudal Britain, judges exclusively administered these statutes, treating workers as the literal property of their employers. Not until 1937, when the Supreme Court upheld the Wagner Act, giving workers the right to organize unions, did the judiciary relinquish political control over the workplace to Congress.

Prior to the ’30s, Orren shows, American judges regularly applied the ”law of master and servant” to quell the worker’s independent will. According to one jurist, that law recognized only ”the superiority and power” of the master, and the ”duty, subjection, and, as it were, allegiance” of the worker. Medieval vagrancy statutes forced able-bodied males into the workplace, while ancient principles of ”entire” contract kept them there. A worker hired for a period of time – often five to 10 years and beyond – was legally not entitled to any of his earnings unless and until he completed the entire term of his contract. When rules of vagrancy and entirety failed, judges turned to other precedents, some dating from the time of Richard II, requiring workers seeking employment to obtain a ”testimonial letter” from their previous employer. Because employers were under no legal obligation to provide such letters, judges could effectively stop workers from ever trying to move on.

As soon as workers entered the workplace, they became the property of their employers.

It’s interesting that I read this almost immediately after reading this in Salon, “It’s true: Cities are meaner.” (emphasis added, natch)

Perhaps it’s no surprise that the field of urban psychology was pioneered by Stanley Milgram, whose famous electrical shock experiments demonstrated how willing we are to take our cues from others. It’s human nature to be wary of going against the norm. That’s why the Bystander Effect varies so greatly from city to city — if you’re in a place where people are apt to intervene, you probably will too. And if you’re not, you won’t.

This fact was illustrated brilliantly in 2003 by Dr. Robert Levine, a professor of psychology at Cal State-Fresno, who spent six years studying people’s willingness to help strangers in different cities. Levine’s assistants dropped pens, faked injuries and feigned blindness from Los Angeles to Madrid to Singapore, and found that not only did the differences in intervention rates vary widely, they could even be predicted.

For instance, the five Spanish- and Portuguese-speaking cities that he studied all scored much higher than average on the intervention scale, and the top two were Rio de Janeiro and San Jose, Costa Rica. He consulted with Latin America experts and learned of the Spanish word “simpatico,” a highly valued social quality that means, in part, a willingness to help others. The easiest way to show it? Public displays of assistance.

The more productive the less “simpatico”–not a surprise, really, is it?

Here is part of the problem.  Some minds (many, too many, most?) argue about freedom “in the aggregate.”  Robin’s piece opens with Henry Ford’s feudal-industrial megalomaniacal “brilliance.”

IN HIS NEVER-ENDING quest for control of the workplace, Henry Ford confronted many foes, but none as wily or rebellious as the human digestive tract. Hoping to tame what he called the body’s ”disassembly line,” Ford wheeled lunch wagons into his auto plant in Highland Park, Mich., and forced workers to wolf down a 10-minute sandwich on the job. So industrialized was ingestion at the plant that workers growled about their ”Ford stomach.”

And this is the kind of comment it elicits:

Given what you’ve previously said about the nature of freedom it isn’t clear to me that what Ford did represents an encroachment upon freedom even by your own standards. Presumably you’ve got to somehow quantify the aggregate increase in freedom offered by placing the car within reach of the common man, something owing to the practices decried in your piece, and then set that against the aggregate loss of freedom in having workers only be allowed things like 10 minute lunch breaks (what is the allowance for lunch breaks that would exist in a truly free society I wonder. 3 hours? 12 hours?).

Is this a utilitarian econometrics of freedom?

The car as representative of a factor of “aggregate freedom” must be measured and set against factory feudalism.  But the “freedom” offered by the automobile is at best an equivocal effect and at worst one of the primary causes of our modern slavery to this detached and uncaring way of life.

It is the absolute lack of sympathy, lack of shared human realities, that makes a comment as ridiculous as this even a possible thought in someone’s warped brain.

*It’s interesting that George Lakoff, in his book about how Republicans have masterfully “framed” every political issue to resonate with a prescribed “core value” (“Don’t Think of an Elephant!”), discusses a line in a Bush II speech where Bush says America doesn’t need to get a “permission slip” from the UN to act unilaterally.  The use of this term frames international multilateral agreements as a weakness akin to having to ask for a bathroom break.