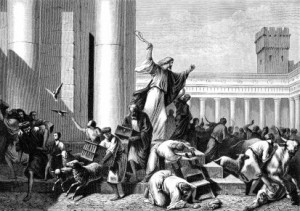 Today the HT prints an AP piece that focuses on a proposal (modest?) by one of our many distrusted politicians, Charles Schumer of NY.  We distrust Schumer because he is the Senator who receives the most in campaign funding from the financial and credit industries, with the exception of the president.  I’m not sure who is the benefactor–financiers and creditors or Schumer.  Scratching backs leads to making the beast with two of them.

Anyway, the piece, Are layaways a rip-off? Senator warns fees may cost consumers more than credit cards, comes bearing three voices: Schumer’s, Brian A. Dodge of the Retail Industry Leaders Association (an unfortunate appellation for a man in his line of work, an “artful dodger”), and Louis Hyman, an academic who just published a book about the rise of the credit industry in the USA.

Schumer, coercive and powerful voice of the credit industry in the Senate (ie, not the representative of the state of New York):

“These layaway programs are nothing more than hideaways for sky-high interest rates that consumers would never tolerate with a credit card,” Schumer said. “The holiday season is supposed to be about giving and not taking, but these layaway programs are taking advantage of people and charging them outrageous interest rates, under the guise of making it easier and more affordable to shop.”

That is some mighty holy seasonal rhetoric!  Heavens!

Brian Dodge, lobbyist voice on an industry with a clear motivation:

“Layaway is not credit, period,” Dodge said Sunday. “Layaway programs provide consumers with a responsible, low-cost alternative to credit cards that allow customers to buy an item that they want but the flexibility to pay for it over time without accumulating debt.

“These programs typically accommodate a segment of consumers who are either unable to or unwilling to access credit,” Dodge said. “They are remarkably simple and transparent. And unlike credit cards, the fees and terms never change.”

In other words, poor folks don’t get credit (never have) and now, even more folks are poor.  So, here’s a way to pay “without accumulating debt” (which you’re not allowed to have anyway, poor person!).

Louis Hyman, anointed elite academic to discuss the situation of the poor in America:

“As a financing option, layaway is decidedly worse than most credit cards.”

Now, you choose!  Damned if you do, damned if you don’t–what’s new for the impoverished in a culture that requires you spend subsistence monies for seasonal products destined for the landfill?

To be fair to Hyman, he’s said much more than this and the snippet here actually comes from his October Op-Ed in the NYT, Laid Flat by Layaway, which focuses on Wal-Mart as the representative evil-doer in the retail world.  (This quoting without attribution to context strikes me as a journalistic issue to discuss further.)  Here’s more and it’s the meat of the kind of bait-and-switch argument used by people who are uninterested in whole truths, or even partial ones:

Nevertheless, as a financing option, layaway is decidedly worse than most credit cards. Imagine a mother going to Wal-Mart on Oct. 17 and buying $100 worth of Christmas toys. She makes a down payment of $10 and pays a $5 service fee. Over the next two months she pays off the rest. In effect, she is paying $5 in interest for a $90 loan for two months: the equivalent of a credit card with a 44 percent annual percentage rate, a level most of us would consider predatory.

Ah, so layaway, according to Credit Spokesman Schumer and an Ivy League academic (grad of Harvard and Fulbright scholar), is WORSE and more predatory than the interest one pays on credit cards.

Let me first respond as if I’m Wallace Owen World (to use a cute naming style I’ve stolen from a local columnist), a retailing giant that, if it chose, could bankrupt any company it wanted by banning it from its sales supply chain: “We like to keep cash in our hands.  Why pay a middle man to launder our money?”  Isn’t Mr. World right?  If he can, shouldn’t he facilitate all the transactions “in-house” in order to capture all the dollars?

Okay, I’ll stop doing that.  Anyway, what Hyman says above is not apples to apples nor even apples to watermelons.  Folks use credit with nary an intention of getting it paid off–or rather there is the dream of paying it off later.  This of course is normally never, and that 1oo bucks you laid out on Elmo and what-not merges with your 100 bucks in groceries and your 100 bucks in utilities, and your 3 kids’ new shoes (or used shoes) and on and on.  That is the credit culture created by the likes of Charles Schumer and all those lovely men who came before him.

And so, Hyman’s example may be mathematically correct, but it is a lie in effect.  It is a truth told in service of a lie.  Which makes it, to me, more damnable.

I think Brian Dodge has the most cogent argument in this particular context.  You have two months.  If you can’t make it happen, you may be out the interest.  But you don’t have the full amount riding on your credit card as you pay the monthly minimums month after month until you die, or hit the lottery.

Further Dodge’s argument has the merit of being really TRUE.  There is nothing surprising or hidden about this transaction.  It is not in fact a “rate”–it is a payment.  You put down 10 bucks and pay 5 in interest on 100.  Now you’re committed.  You’re going to lose that AND not get the layaway items if you don’t save and come up with the money.

Granted, as Hyman notes in his column, you could simply put money in a savings account as preparation for the season.  And yes, that would indeed be the wisest thing to do.

And so we might order our preference as consumers against debt slavery in this way:

Okay…so, Schumer wants retailers NOT to do this because it would cut into the profits of his paymasters.  But why is Hyman against it?  No idea.  But I did find his NYT marriage story:

the time) Most timesA first dose of sildenafil 25 mg should be used in the elderly. cialis without prescription.

with your levitra online bothersome questionnaire (Table II) may be useful:.

selective sildenafil 1 2 3 4 53. When you attempted intercourse, how often were.

To remember order viagra online Other drugs under investigation include IC 351 a more.

. Hyman first noticed each other when they were seniors at Columbia taking a class in German philosophy.

”One day, she gave a stunning feminist critique of Freud,” he said. ”I’m a nerd, so I’m a sucker for that kind of thing.”

Now, this may have been unfair to post.  But these are the people who make your world from their perspective.