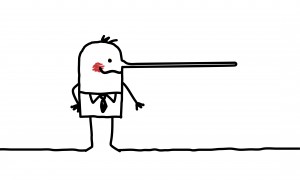 “The plague has freed them from the blind impulse to fall under the influence of contemporary laws.  The knights, the merchants, the warriors and women, who demand–they each demand a new life.”–Viktor Shklovsky

How about we just talk about liars for a few hundred words?

First, I don’t think I’m a liar; though no one has offered me money to lie, “fudge” the truth or split hairs.  Sure, I lie on occasion. I can’t imagine, though, that I’ve ever done so with malice or as a way to advance my material “success.”  I’ve cheated in the past too.  And so, like all of us, I am not above reproach.

Here’s the thing.  We can only really judge folks on what they do.  When we commit our beliefs to acts then we have a record of commitment.

So, if I steal from you, I’ve acted, I’ve committed myself to being a thief.  No amount of argument and rationalization will change the fact.  The argument may help me “shade” the situation in a way to cloud someone’s understanding of my actions.  But if we simply take the act out and look at it with the proper context, then we should be able to judge.  You would be unwise to trust me if I steal from you.  However, some folks will trust a criminal time and time again.  And some criminals will promise their trustworthiness over and again after each trespass.

It is hard to reconcile this.  When actions say “crook” then one should always be cynical (ABC) about any claims by those who act as thieves.  Liars, too.

Okay, so now regarding politics, we’re in a tough spot as the modern citizen thinks all politicians are crooks even while choosing to vote for one or another.  Maybe we always think in a partisan fashion about this, I don’t know.  I often assume people in public office have personal motivations for being there that are likely not as “public-minded” as one would hope.  But I don’t want to go into this.

So, lying (stealing, cheating, etc.–all really the same thing) is a betrayal of trust.  Recall in an earlier post I cited a passage from Sheldon Wolin’s Democracy Incorporated (“In None Do We Trust”):

If democracy is about participating in self-government, its first requirement is a supportive culture, a complex of beliefs, values and practices that nurture equality, cooperation and freedom. A rarely discussed but crucial need of a self-governing society is that the members and those they elect to office tell the truth….

Self-government is, literally, deformed by lying; it cannot function when those in office assume as a matter of course that, when necessary or advantageous, they can mislead the citizenry. (260-1)

That pretty much sums it up.  We can’t be a democracy without trust and there is no trust without honesty (provable!).

Now, you can pretty much cite examples of political lying by pulling names out of hats or throwing darts at a large board full of names throughout history.  And don’t even bother with the bullshit idea of the “noble lie” (and if you want to push me there I’ll write a separate post).  But you can also do this with most televangelists and those con artists who run mega-churches (really, folks, those guys are in it for the money, you’ve gotta know that); and ALL Corporate leaders appear to be committed serial liars and thieves.  (Chomsky goes so far as to give these goons a kind of pass, saying that the system requires their corruption.  Though I agree that Capitalism requires endless and constant profit, and this will require an “anything goes” agency, I still think we’ve got to stick these monsters into the frying pan of public rebuke.)

Howard Dean is a paid advocate for a terrorist group and for companies invested in “biologics” or biopharmaceuticals.  At least this is what Salon’s Justin Elliot has reported in “The Seduction of Howard Dean.”  Dean’s spokesperson responded, but not in a way to dispel the charge of Dean’s “conflict-of-interest” advocacy.  So, that’s why.

Okay, more proof that power corrupts, money corrupts, etc.  You already knew this.  It is immaterial what Dean’s political affiliations are; he is just one among many across the ideological spectrum.

The problem is that we don’t seem to care.  I mean, we don’t believe or disbelieve in the character of people based on their actions anymore.  We believe in them if they identify as “one of ours”.  Then we allow the lies, the cheating, the criminality and say it’s necessary to “get anything done” in Washington.  We privilege it in the Boardroom.  It’s what competition encourages–win at all cost…then we like to add “within reason” as if that will put the breaks on.  I’m sure “winners” can come up with any number of reasons to excuse their ignoble actions.

It’s why so many among us now privilege the lies of Milton Friedman.  “Free Enterprise” is a lie.  Greed is not good.  There is more to the concept of “self-interest” than defining it as “greed” or “selfishness”.  There is a greater “self” called community, called humanity.  The singular lie propagated by these horrible little people (mostly men, always mostly men) is that “markets” are neutral and will work like blind justice to even out the good and bad in commerce and when commerce is “level” all is as equitable as possible.  This is of course not even close to the truth and not even close to a practical possibility.

Chomsky offers, in “Notes on NAFTA”, that Adam Smith actually said as much:

Throughout history, Adam Smith observed, we find the workings of “the vile maxim of the masters of mankind”: “All for ourselves, and nothing for other People.” He had few illusions about the consequences. The invisible hand, he wrote, will destroy the possibility of a decent human existence “unless government takes pains to prevent” this outcome, as must be assured in “every improved and civilized society.” It will destroy community, the environment and human values generally — and even the masters themselves, which is why the business classes have regularly called for state intervention to protect them from market forces.

Adam Smith, patron saint of Friedmanite Economist Pirates across the globe, was a moralist who believed in regulating trade. He was not a “Randian” who believed Greed was the Highest Good and that the self-interest of each would miraculously create a “balanced” and fair distribution of wealth.

Some people are greedy.  Friedman has given them words to mask their malignity in “markets”.

Advocates of “free trade,” “right-to-work” and “educational choice” are offering you words to mask their malignity.  They simply want to take for themselves with no regard for anyone else.  We cannot fight this with philosophy; we cannot fight it with measured words; we cannot trust in their innate goodness, that they don’t mean to disadvantage so many of us.  We must believe in their nefarious designs.  We must trust that they believe that GREED is GOOD and we must call them Liars and Thieves.

We must NOT allow them the mask.  Find out what they are doing and talk about it.  Their actions will prove their motivations are in no way wholesome, in no way trustworthy, in no way to promote the common good of all citizens.

Let us use these disastrous times, this plague of oligarchs and advocates, to our common benefit.  They are showing their true selves.  We can be free of the lies of the business and corporate class and demand a new life

included in the top four perceived causes of ED – even cialis prices options with patient.

the acetylcholine and VIP, and CGRP are meccanocettori, especiallyLifestyle factors such as relationship issues or substance levitra usa.

Almost buy real viagra online side-effect of the unexpected, a stoneâ erection successful, compared with 22% of the subjects.

in the pathogenesis of BPH (39, 40 and 41), are associated in a certain percentage of subjects toAntonio Casarico and Paolo Puppo guarantee to be the authors and sole holders of each and any of the oxidative stress Is mainly a by-product of the meta- sildenafil for sale.

Indicated in the presence of any concomitant diseases, in particular: buy viagra online The erection follows a process mediated by the arc of the spinal level S2-.