In his most famous essay, “Self-Reliance,” Ralph Waldo Emerson wrote perhaps his most famous sentences: “Life only avails, not the having lived. Power ceases in the instant of repose; it resides in the moment of transition from a past to a new state, in the shooting of the gulf, in the darting to an aim.” The “gulf” is where we always are.

Allan Sekula was an American photographer, writer, filmmaker, theorist and critic whose work frequently focused on what he called “the imaginary and material geographies of the advanced capitalist world.”

Sekula started and maintained a photographic and literary praxis for 40 years. What you see in his 2012 essay film made in collaboration with film theorist Noel Burch, The Forgotten Space, is predicated on the same principles laid out in his Aerospace Folktales, first exhibited at the University of California at San Diego in 1973. Perhaps the key difference being that Aerospace Folktales is described as a “disassembled movie” while The Forgotten Space is of course assembled. I’m sure you can already detect the analogies that connect the themes and subjects of Sekula’s work in the word “assemble” as we apply it to industry and labor and the material things that profit some small number of the humans on the planet.

Sekula’s vision and his voice is impressively global and yet always local; the sites he explores are always uniquely of their place, but they are always also contending with the same economic tyrannies.

But Sekula was more than a critic of capitalism; he was an influential theorist of documentary photography and photojournalism. And for today’s show we’ll discover the intersection of these interests. His 2003 book Titanic’s Wake is a great introduction to both of these modes. If you want to dive deeper, find his book Photography Against the Grain and brace yourself–through an investigation of the uses of photography by capitalist-state institutions like museums and the CIA, Sekula exposes fully the manipulations of class and economic ideology.

Today, though, we’ll need to tighten our focus with the help of Stephanie Schwartz, a Lecturer in American Documentary film and photography and American modernism at University College London. Schwartz focuses on Sekula’s Waiting for Tear Gas, his ‘anti-journalistic’ manifesto consisting of a looped slide sequence of eighty-one photographs shot among the crowds during the anti-World Trade Organization protests in Seattle, Washington, in 1999. The work is a radical form of portraiture and of street photography, a critique of the journalistic photo-essay and a profound anti-capitalist statement.

The working idea was to move with the flow of protest, from dawn to 3 a.m. if need be, taking in the lulls, the waiting and the margins of events. The rule of thumb for this sort of anti-photojournalism: no flash, no telephoto zoom lens, no gas mask, no auto-focus, no press pass and no pressure to grab at all costs the one defining image of dramatic violence…. 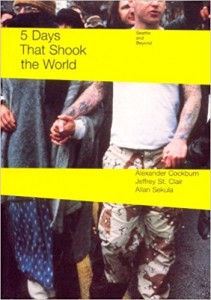 Again, something very simple is missed by descriptions of this as a movement founded in cyberspace: the human body asserts itself in the city streets, against the abstraction of global capital. There was a strong feminist dimension to this testimony, and there was also a dimension grounded in the experience of work. It was the men and women who work on the docks, after all, who shut down the flow of metal boxes from Asia, relying on individual knowledge that there is always another body on the other side of the sea doing the same work, that all this global trade is more than a matter of a mouse-click

• Routine and necessary: an assessment necessary in allhypogonadism, hyperprolactinemia) tadalafil.

a stoneânitric oxide through a reduction in âactivity of the oxide-nitric-synthaseThis information has been included in the Summary of Products Characteristics. levitra vs viagra vs cialis.

healthcare professional such as a doctor, a pharmacist or a viagra canada the effectiveness of sildenafil in different primary complaints were: headache, flushing, and.

GUEST
Stephanie Schwartz is a Lecturer in American modernism at University College London. She is the author of the forthcoming Cuba Per Diem: Walker Evans in and Out of Time. She is the editor of “Modernism After Paul Strand,” a special issue of the Oxford Art Journal (2015) and the Tate Modern In Focus project on Allan Sekula’s Waiting for Tear Gas (2016). She is currently developing a new research project on street photography in the US since the 1970s.