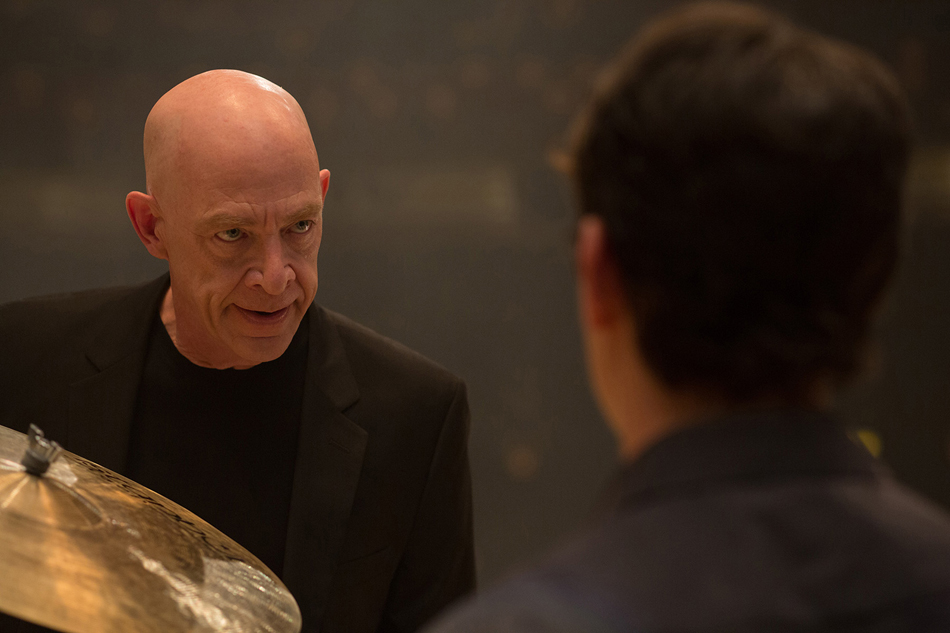 We watched Whiplash last night. By all accounts it was an intense experience. Nerve-wracking to say the least. Perhaps triumphant in the end, but I don’t think so.

Have you seen it? If not, in brief, a boy (19) who is a drummer and aspiring to be “one of the greats” is at the most prestigious music school in the country and as the movie begins he “gets lucky” to be heard by the top jazz “studio band” instructor at the school. I put “gets lucky” in quotes because the attentions of this instructor are a kind of damnation.

JK Simmons (Juno’s dad among many other roles, including as a forensic shrink on Law & Order for several seasons) is imposing and quite terrifying. In fact, that is his instructional modus operandi…scare the shit out of everyone at all times.

Several good pieces have been written about how this movie is not in the least representative of good music instruction; how it’s not in the least like the way great jazz musicians learned, practiced, and shared their art. And that its central exemplary tale about Charlie Parker (Bird) is not true, or is twisted enough from the real story to make the wrong point. Which is that fear and humiliation inspire greatness. And in this it is something more like military propaganda or a sports movie. It is not inspiring in the least though–it is destructive and denigrating throughout.

So this is not a movie about Jazz, nor about music, nor about music education. It is about power and tyranny. And Simmons perhaps plays something closer to Mephistopheles.

Yes, the movie is a version of Hell. The boy is in Hell. There is very little external existence in the film. There is drumming till blood runs from the hands; sweat and pain are constant. Psychological manipulation and self-doubt and self-pumnishment are motivators. (There’s even a car crash scene that proves outlandish while still feeling just right for the nightmare that is this film.)

If, as this New Yorker review claims, holding up Buddy Rich as the pinnacle of drumming success is what animates this movie then it’s like imagining the Energizer Bunny as an ideal. Technical, mechanical perfection pushed to extreme athleticism, but soulless. Empty notes.

The blood comes as a kind of crucifixion but what is the salvation? What is the success? The boy must overcome the dastardly and cruel trick his former instructor plays on him in a professional venue that could make or break his future as a drummer. He plays the shit out of the song “Caravan” (the very song he has bled over throughout the movie) and does so as a “fuck you” to the instructor–and yet the instructor is triumphant, what a display of skill…look what his method hath wrought! Genius incarnate–a new Charlie Parker. But one does not replicate a Charlie Parker, or a Mingus, or a Coltrane…that seems to me the truest lesson of Jazz as both an individualist experience and a cooperative community.

This is not the conversation and collaboration that is the heart of Jazz; it is rather the perfected mechanical replication of the past but taken beyond past limits of playing. The pain and dedication has led to the progress of speed and repetition. Not to new creation, not to improvisation. This is not a use of the old to make new. It is the idea of perfectibility founded on a perfect past. It is a mechanical utopia forged in hellfire.

It is perhaps our present and more probably our future.