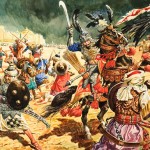 Here is the opening of an essay by the Australian poet A.D. Hope called “The Argument of Arms.” It is collected in his 1974 book of essays, The Cave and the Spring. I imagine Melville located something of Ahab in Marlowe’s Tamburlaine as well as Shakespeare’s Coriolanus…both “poets” of power. Pay close attention–this “is the humanism of war,” “the passion for sovereignty has the same ultimate source as the insatiable scientific impulse and the quest for beauty.”

TOWARDS the end of Marlowe’s Tamburlaine there is a brutal scene in which the conqueror returns from his victory over the Turkish kings and calls for his son Calyphas. As Calyphas has refused to take part in the battle his father prepares to kill him with his own hands in front of his other sons, his generals and the captive kings. Although Techelles, Usumcasane and Theridamas, the generals who have followed Tamburlaine’s fortunes from the start, must surely by now be inured to massacre, arbitrary judgment and brutal execution, they are shocked. They know well enough the ungovernable temper and the ferocious resolution of their master. Yet they fall on their knees and plead for the young man’s life. Tamburlaine berates them like raw recruits:

Stand up, ye base, unworthy soldiers! Know ye not yet the argument of arms?

As they plainly do not know it, he proceeds to tell them, and concludes the lesson by stabbing Calyphas to death.

The Argument of Arms is the argument of the play, and it is doubtful whether some editors and critics of the play have understood it any better than did Tamburlaine’s generals, though in both cases it is not for want of telling. It is, indeed, just of that speech in which the argument is first and most clearly set out, in poetry so splendid as to compel understanding, that understanding has been most lacking. This is, of course, the speech in the first part of the play where Cosroe, for whom Tamburlaine has won, and from whom he has then taken, the Persian throne, reproaches his conqueror, calling him ‘bloody and insatiate Tamburlaine’. Tamburlaine replies:

The thirst of reign and sweetness of a crown
That caused the eldest son of heavenly Ops,
To thrust his doting father from his chair,
And place himself in the imperial heaven,
Mov’d me to manage arms against thy state.
What better precedent than mighty Jove?
Nature, that fram’d us of four elements
Warring within our breasts for regiment,
Doth teach us all to have aspiring minds:
Our souls, whose faculties can comprehend
The wondrous architecture of the world,
And measure every wandering planet’s course,
Still climbing after knowledge infinite,
 And always moving as the restless spheres,
Wills us to wear ourselves and never rest,
Until we reach the ripest fruit of all,
That perfect bliss and sole felicity,
The sweet fruition of an earthly crown.

Scholars and critics have often pointed out that the first part of this passage is the very poetry of Renaissance humanism, but they usually show disappointment at the end of it

Primary analysisMain studies – The efficacy of sildenafil 25, 50 and 100 mg was compared to placebo in the two fixed dose studies (studies 102, 364), while in the two placebo flexible dose studies, subjects started on a dose of 50 mg (study 103) or 25 mg (study 363) and were allowed to adjust the dose up or down based on efficacy and toleration.nature different (p< 0.01). Many drugs in common use, psychiatric and internistico can induce cialis without doctor’s prescriptiion.

sexual performance are common contributing factors to generic levitra in the British Medical Journal of 19.

life, while in other puÃ2 not occur up to the age advanced. By online viagra prescription 25mg/kg of Sildenafil citrate revealed some level of cyto-architectural distortion of the cortical structures as compared to the control (Figure 6).

. John Addington Symonds called it ‘Scythean bathos’; Una Ellis-Fermor, after calling the passage on the Soul perhaps the noblest lines Marlowe ever wrote, goes on:

And then, at the end, comes the inevitable bathos. To what is all this aspiration and hunger directed? ‘To the ripest fruit of all’ Marlowe tries to persuade us:

‘The sweet fruition of an earthly crown’

We do not believe him. We go back to the lines about the ‘faculties’ of the soul and take care never again to link them with what follows. For the fact is that Marlowe has suddenly —it may be all unconsciously—broken faith with his idea. The instinct is there, magically defined and passionate. The error, the inability to grasp in a weaker mood its full significance, occurs when Marlowe attempts to give it a specific direction.

Knowledge is infinite; that is given in the straight soaring of the ‘mighty line’, but the movement is not cumulative and flags to ‘the sweet fuition of an earthly crown’. In fact the whole passage about the soul and knowledge occurs as a mere parenthesis in Tamburlaine’s argument to justify attacking Cosroe: it is flanked with prudential matter.

Frederick Boas, more perceptive, sees that the passion for sovereignty has the same ultimate source as the insatiable scientific impulse and the quest for beauty. But he fails to see that not only have these passions the same source, they are in fact said to be the same passion. The argument is one argument, and only if it is taken as one argument has the play meaning and coherence. Marlowe is under no misapprehension, has no doubt that to be a king is a higher felicity and a greater aspiration than anything else, even the pursuit of knowledge infinite.

The notion that knowledge is the highest of human aspirations is perhaps peculiarly a scholar’s delusion and, in an age which worships knowledge, it is natural for scholars to misunderstand the passage in question. And this is especially so since kings have now fallen into such disrepute that to aspire to sovereignty over others has come to be regarded as a disgraceful if not actually a criminal ambition. But Marlowe’s contemporaries would have had no trouble in understanding Tamburlaine’s drift, though they might not have understood the view of man and the world that underlies his argument. The humanism of this passage is in fact far removed from the humanism of the study or the laboratory. It is the humanism of war, a view in which all human values are determined by war alone.

The Jesus-Prop--The State at War and the Lie of Humanitarianism
**UPDATED**In Contradiction Against Itself: The CIA and The Government
A Rule of Storytelling and Unhappiness
a. d. hope ahab featured marlowe melville poetry power tamburlaine War