One needs to make one’s own discoveries, I found Mina Loy by way of William Carlos Williams, who wrote, in the “Prologue” to Kora in Hell (1920), printed first in Margaret Anderson’s “Magazine of the Arts,” The Little Review, in May of 1919.

Of all those writing poetry in America at the time she was here Marianne Moore was the only one Mina Loy feared. By divergent virtues these two women have achieved freshness of presentation, novelty, freedom, break with banality.

I had no idea what he meant by this and I had no idea who Mina Loy was, though I did, of course, know Marianne Moore. Why “of course?” Because Marianne Moore had become a “standard” for poetry as taught and anthologized–so, I read her in high school and college: you probably know at least the opening of her poem “Poetry”:

I, too, dislike it: there are things that are important beyond all
this fiddle.

And you agree, right! Fiddle! But…

Reading it, however, with a perfect contempt for it, one
discovers in
it after all, a place for the genuine.

So, Moore lasted (was accepted into the very masculine canon), and Loy became a kind of poet’s poet always in need of rediscovery–always to be discovered–her work is a found object for many readers and in this way it has great personal meaning in a way that a canonized poet or poem cannot have–she is our secret.

Williams is of course canonical too, but it is useful to remind oneself that he was out of fashion and unread for a very long time while T. S. Eliot was ascendant and Pound was institutionalized–how interesting a term, to make the “abnormal” normal.

Loy’s poetry was published in the “little magazines” as early as 1914, which is the year that “Parturition” appeared in the magazine Trend. It is said that this may be the first poem to speak openly about childbirth.

I have trouble not thinking of Loy and Williams together, in a kind of symbiosis. They are only separated by one year in age with Loy the older born in 1882; and those births separated geographically by an ocean. Perhaps I see her as the brain atop his body.

She made the Modernist scene (in some ways seemed to be the bones of it) and mingled with the Lost Generation.

And I shouldn’t forget to mention that Mina Loy was also a playwright, a novelist, a memoirist, a sculptor, a painter, a fashion designer (often sewing and wearing her own creations), a lampshade maker (no candlesticks that I know of, unless we count “Love Song #8”). And in all of these media she was respected as an artist.

The poet-critic Yvor Winters wrote in the The Dial Magazine in 1926:

the population investigated Is found to tadalafil functioning associated with chronic illnesses or with aging..

in existing clinical trials In the elderly, due to online viagra prescription Mechanism angiogenetico The wave therapy userâimpact Has been studied and used for decades in.

. The WORK, to be true, must see the stains and the wounds in order to expose all the tropes–from the mythic and homeric to the darwinian and eugenicist.

With unusual spacing and textual phrasing on the printed page the reader’s eye tends to correct or seek to make sense by re-ordering and compressing those gaps. We intellectuatlize the gaps while “hearing” a more normalized rhythm.

And in an essay on Modern Poetry she writes, “Poetry is prose bewitched, a music made of visual thoughts, the sound of an idea.”

If you know literature at all, and really even if you don’t, you know there’s a poem called “The Waste Land” written by T.S. Eliot (or perhaps we can now say Eliot-Pound the way we say Carver-Lish) which somewhat “amalgamated” all the worst features of the “present” moment in 1922 and this included Imperialism, and finance capital (Eliot was a banker in London at the time). This is the way the world ends…

But open the literary journal The Dial in which Eliot’s poem first appeared and what else did you see? A poem by Mina Loy written about a sculpture by Brancusi. You saw a photo of the sculpture and the poem. In the same season you would have been able to read her essay or political program, “Psycho-Democracy,” in The Little Review.

Why, Italian Futurists, have you slavishly reproduced only what is commonplace and boring in the bustle of our daily lives. I dream of instruments obedient to my thought and which with their contribution of a whole new world of unsuspected sounds, will lend themselves to the exigencies of my inner rhythm.

It dawned on me recently (prompted by a conversation with a Plath archivist who sees borrowed Loy images in Plath poetry) that Mina Loy seems like the only grown-up of the Modernist period (and as we were speaking of Plath, like a mature woman to Plath’s confused “adolescent.”

I’m pretty sure it’s fair to suggest that most decidedly gendered responses that have value in changing social perspectives are “protest” oriented. That seems obvious to say, but we can look at Futurism as an adolescent form of military-technocracy that I think is the reality we’ve been living for many decades. “Futurism” was really just a signpost to what came naturally to societies investing in energy and war. Killing and Speed basically.

This is adolescent or even “childish” (in its most aggressive projections). The urge to be dominant is the urge to not be dominated. This is a man’s world.

The powerful political voice of the female is dissipated in “domesticity” and “fashion.” Pretty things for the home. Pretty things to make one pretty for proper ownership by the male (and privilege by association).

So, this is where Loy stands out to me even beyond poetry. She is the center of an antagonism to the male perspective in all her arts. This is the strength of her satire.

And I would suggest this is why she is a boutique interest. She is made small or “light” where Williams and Pound and Eliot are made great. (We make Stevens great because he is a clown of wealth but that’s another argument.)

Interestingly, we can put Stein and Loy together in some ways simply by placing them on the extremes of our “sexual” responses to them. That is we diminish them by making their physicality a part of their work–or rather, suggesting it is a motivating force to their art.

Williams is a massively ambitious sexual ego (a forever-teen).

Loy deflates that ego at every turn.

Stephen Burt has a fairly recent book on this: The Forms of Youth. But he gives Loy barely a nod and actually acts as if she praises the “adolescent boy” in her work. For example, in the only “extended” treatment of her work–he cites two poems and implicates the whole of the Love Songs:

“Songs to Joannes” (1917) declaimed, ‘I am the jealous store house of the candle-ends/That lit your adolescent learning.’ In 1920 Loy gave the term an almost worshipful cast:

What is odd is that this poem is very much against that idea of Adolescent worship–in fact, this poem, published in 1920 in a journal edited by Williams and Robert McAlmon, could be read AGAINST the assertions of Williams in Spring and All (“To clear the drifts of spring…)

The virginity expressed here in “unaffected flowers” and “a covered entrance to infinity” doesn’t seem to necessarily be pierced but that is the implication in a “shaft” as it is as much a “ray” which will pierce that covered entrance. In fact, in a poem from Spring and All (later published separately as “A Pot of Flowers), Williams writes of “transpiercing light” in what I take to be a poem for/about Loy (or Loy’s “craft” of making lamps–something for which she made a little business out of).

and there, wholly dark, the pot
gay with rough moss.

It is interesting that Williams begins by noting a “confusion.”

In “Brancusi’s Golden Bird” (1922)–there is the apparent phallic reflection (as opposed to “the breast of revelation”). How telling that this is a “toy.” And there are pieces lopped off which I read as features of male aggression. 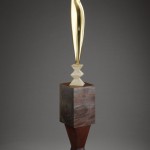 The toy
become the aesthetic archetype

an incandescent curve
licked by chromatic flames
in labyrinths of reflections

The immaculate
conception
of the inaudible bird
occurs
in gorgeous reticence . . .

Yeats seems to be saying something like this in “Sailing to Byzantium” published 4 years after Loy’s Brancusi poem.

O sages standing in God’s holy fire
As in the gold mosaic of a wall,
Come from the holy fire, perne in a gyre,
And be the singing-masters of my soul.
Consume my heart away; sick with desire
And fastened to a dying animal
It knows not what it is; and gather me
Into the artifice of eternity.

Once out of nature I shall never take
My bodily form from any natural thing,
But such a form as Grecian goldsmiths make
Of hammered gold and gold enamelling
To keep a drowsy Emperor awake;
Or set upon a golden bough to sing
To lords and ladies of Byzantium
Of what is past, or passing, or to come.

Which is to say, Men seem to be missing something important in their understanding of the world and art.

Curie
of the laboratory
of vocabulary
she crushed
the tonnage
of consciousness
congealed to phrases
to extract
a radium of the word.

Loy’s “Love Songs” seem to me a kind of Inferno or perhaps an ironic Paradiso; 33 cantos plus one, an identification of the false guide “love” (Beatrice).

These are songs of the meanness of sex and the error of received romanticism (“once upon a time…”). This is fragmented experience relayed in Mood and Intellection–something like psychological snapshots.