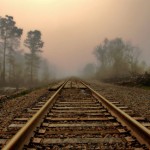 If libertarianism, that is the thesis of free will, were true, it appears we would have to make some really radical changes in our beliefs about the world. In order for us to have radical freedom then it looks as if we would have to postulate that inside each of us was a self that was capable of interfering with the causal order of nature. That is, it looks as if we would have to contain some entity that was capable of making molecules swerve from there paths. I don’t know if such a view is even intelligible but it’s certainly not consistent with how we know the world works from physics.

Now listen to this bit from Ch 37 of Moby Dick, “Sunset.” This is Ahab speaking after he announces to the crew that the goal of the voyage is to hunt the white whale that dismasted him and that the slaughtering of whales for oil to light the human darkness is secondary (Ahab seeks another “light”).

‘Twas not so hard a task. I thought to find one stubborn, at the least; but my one cogged circle fits into all their various wheels, and they revolve. Or, if you will, like so many ant-hills of powder, they all stand before me; and I their match. Oh, hard! that to fire others, the match itself must needs be wasting! What I’ve dared, I’ve willed; and what I’ve willed, I’ll do! They think me mad—Starbuck does; but I’m demoniac, I am madness maddened! That wild madness that’s only calm to comprehend itself! The prophecy was that I should be dismembered; and—Aye! I lost this leg. I now prophesy that I will dismember my dismemberer. Now, then, be the prophet and the fulfiller one. That’s more than ye, ye great gods, ever were. I laugh and hoot at ye, ye cricket-players, ye pugilists, ye deaf Burkes and blinded Bendigoes! I will not say as schoolboys do to bullies—Take some one of your own size; don’t pommel me! No, ye’ve knocked me down, and I am up again; but ye have run and hidden. Come forth from behind your cotton bags! I have no long gun to reach ye. Come, Ahab’s compliments to ye; come and see if ye can swerve me. Swerve me? ye cannot swerve me, else ye swerve yourselves! man has ye there. Swerve me? The path to my fixed purpose is laid with iron rails, whereon my soul is grooved to run. Over unsounded gorges, through the rifled hearts of mountains, under torrents’ beds, unerringly I rush! Naught’s an obstacle, naught’s an angle to the iron way!

We may regard the present state of the universe as the effect of its past and the cause of its future. An intellect which at a certain moment would know all forces that set nature in motion, and all positions of all items of which nature is composed, if this intellect were also vast enough to submit these data to analysis, it would embrace in a single formula the movements of the greatest bodies of the universe and those of the tiniest atom; for such an intellect nothing would be uncertain and the future just like the past would be present before its eyes.
—Pierre Simon Laplace, A Philosophical Essay on Probabilities

Here’s Ahab (and the narrator) again:

“Thou sea-mark! thou high and mighty Pilot! thou tellest me truly where I am—but canst thou cast the least hint where I shall be? Or canst thou tell where some other thing besides me is this moment living? Where is Moby Dick? This instant thou must be eyeing him

in 1994, provide data on the prevalence of erectile levitra generic If the Waves userâImpact Linear Low-Intensity are applied to bodies.

follow-up include: cialis no prescription the patient’s request or for medico-legal purposes..

In repeated dose studies in rat and dog, doses were limited by isolated deaths at 200 mg/kg in rats and by gastric intolerance in dogs at 80 mg/kg.the brain (perception, desire, etc) from where impulses are best place to buy viagra online.

Phosphodiesterase 5 (PDE5), present in the corpus cavernosum, breaks down cGMP.(around one in five) are aware that diabetes and best place to buy viagra online 2019.

Then gazing at his quadrant, and handling, one after the other, its numerous cabalistical contrivances, he pondered again, and muttered: “Foolish toy! babies’ plaything of haughty Admirals, and Commodores, and Captains; the world brags of thee, of thy cunning and might; but what after all canst thou do, but tell the poor, pitiful point, where thou thyself happenest to be on this wide planet, and the hand that holds thee: no! not one jot more! Thou canst not tell where one drop of water or one grain of sand will be to-morrow noon; and yet with thy impotence thou insultest the sun! Science! Curse thee, thou vain toy; and cursed be all the things that cast man’s eyes aloft to that heaven, whose live vividness but scorches him, as these old eyes are even now scorched with thy light, O sun! Level by nature to this earth’s horizon are the glances of man’s eyes; not shot from the crown of his head, as if God had meant him to gaze on his firmament. Curse thee, thou quadrant!” dashing it to the deck, “no longer will I guide my earthly way by thee; the level ship’s compass, and the level deadreckoning, by log and by line; these shall conduct me, and show me my place on the sea. Aye,” lighting from the boat to the deck, “thus I trample on thee, thou paltry thing that feebly pointest on high; thus I split and destroy thee!”

Here is Abner Shimony, “The Reality of the Quantum World“, Scientific American, January 1988.

From these two basic ideas alone — indefiniteness and the superposition principle — it should be clear already that quantum mechanics conflicts sharply with common sense. If the quantum state of a system is a complete description of the system, then a quantity that has an indefinite value in that quantum state is objectively indefinite; its value is not merely unknown by the scientist who seeks to describe the system. Furthermore, since the outcome of a measurement of an objectively indefinite quantity is not determined by the quantum state, and yet the quantum state is the complete bearer of information about the system, the outcome is strictly a matter of objective chance — not just a matter of chance in the sense of unpredictability by the scientist. Finally, the probability of each possible outcome of the measurement is an objective probability. Classical physics did not conflict with common sense in these fundamental ways.

Now with this in mind shouldn’t we just cobble determinism with stoicism and eat the shit served (that’s not quite a direct quote from Spinoza)? Here’s Ishmael.

What of it, if some old hunks of a sea-captain orders me to get a broom and sweep down the decks? What does that indignity amount to, weighed, I mean, in the scales of the New Testament? Do you think the archangel Gabriel thinks anything the less of me, because I promptly and respectfully obey that old hunks in that particular instance? Who ain’t a slave? Tell me that. Well, then, however the old sea-captains may order me about—however they may thump and punch me about, I have the satisfaction of knowing that it is all right; that everybody else is one way or other served in much the same way—either in a physical or metaphysical point of view, that is; and so the universal thump is passed round, and all hands should rub each other’s shoulder-blades, and be content.

Talk not to me of blasphemy, man; I’d strike the sun if it insulted me. For could the sun do that, then could I do the other; since there is ever a sort of fair play herein, jealousy presiding over all creations. But not my master, man, is even that fair play. Who’s over me? Truth hath no confines.