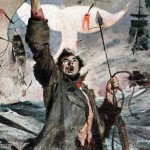 Okay, so this might be a tad petty, but well, so what?

On August 17th, Clare Spark of the blog YDS: The Clare Spark Blog, posted her incisive thoughts on “race relations” with the Ferguson, Missouri police murder of an unarmed Black man and the ensuing riots and militarized response by a swift and brutal police state as the ostensible impetus (Improving “race relations”: Left, Right, and Middle).

After detailing her assessment of the errors of the Left-Right and in-between, after decades of scholarly work understanding the politics of those who are not Clare Spark and who clearly have devious motives for having a political stance not in alignment with Clare Spark’s, she gives this as her sage advice:

Clare’s advice: Had the phrase “move on” not been sullied by the ultra-liberal George Soros forces, I would advise concerned Americans to stop dwelling on past failures and errors, but to focus on a quality education for all children, neither idealizing nor demonizing those aspects of the Western past that are irrefutably “racist” and demeaning to non-whites. There is a heated debate right now regarding whether or not “race” even exists as it is currently imagined; a revival of Lamarckianism may be in the works. As for the father-led family, that mostly conservative strategy seems utopian to me, and would take to long to demonstrate results, unlike potential changes in school curricula and in the media.

First, it’s always nice to get a political dig in before you get real. But let’s try to understand Spark’s “throw-away” impressions before “moving on.” “Lamarckianism” [sic] is defined via a Wikipedia entry (here) as “the idea that an organism can pass on characteristics that it acquired during its lifetime to its offspring (also known as heritability of acquired characteristics or soft inheritance).” This idea was abandoned via Darwin and Mendel but, “interest in Lamarckism has continued (2009) as studies in the field of epigenetics have highlighted the possible inheritance of behavioral traits acquired by the previous generation.” I have to guess what this means here for Spark, but it seems as if we might imagine racism isn’t just learned “in situ” but that it can be genetic in some sense. I don’t know what Spark thinks of this in terms of “race relations” as she doesn’t say, but there it is.

Then, we are told not that the conservative ideology of the “father-led” family won’t work (and here this means that those poor Black kids don’t have daddies that “lead” the traditional family unit so that they might share traditional White values), but she says it would take too long to instill this “method” of social management into Harlem. But what CAN work is…Eva’s agenda! (And maybe this is where Lamarckism and epigenetics comes in.)

Because, you see, it all comes down to quality education (behavioral manipulation to “insert” the right epigene?) and not the combating of economically designed and socially “deserved” poverty. And not just any education, but that provided by a charter corporation with very nearly a “cult” figure-head, Eva Moskowitz, funded by public tax dollars and given extra juice via billionaire investors, as Spark makes plain:

One thing is for certain: Eva Moskowitz’s charter schools in Harlem have established that black and brown children can “succeed” beyond our wildest dreams if there is strong cooperation between school staff and parents, and a challenging curriculum.

Hope looms on the horizon, but we are all responsible, white and non-white alike, for pushing Eva Moskowitz’s agenda forward, notwithstanding opposition from entrenched interests such as teachers unions (see comments below).

(I am the representative of teachers union propaganda that she references in “see comments below.”)

I don’t know why “success” is in quotes unless it’s a little inside notation for the Moskowitz-led “Success Academy,” and I’m not sure what Spark’s “our wildest dreams” means either–“gosh, I can’t believe how smart those little poor, Black/Brown, father-less kids are…who’da thunk it?!”

Of course, you won’t find a clue as to what that Moskowitz agenda is on Clare Spark’s blog…and like other Charter Leadership Cults, you won’t really be able to find out what goes into a “Success Academy” curriculum. But Spark actually does tell us one aspect of the Moskowitz agenda: the political destruction of unions and the promotion of managerial and business methods designed to favor high CEO compensation and billionaire-class interests, such as that of Daniel Loeb, Chairman of the Board of Success Academy AND Clare Spark’s darling progeny.

When I point this out in the blog comments–I am quickly called out as an opponent of “Eva” (the person) and not her “agenda” which is one shared by most Charter corporations–making money for the CEO (no shareholders to worry about here!) and reducing teaching to unprotected wage labor (though Spark would protest this as teaching isn’t labor but seeks the pretense of such so as to be coddled by a soft-minded system, see “Labor Day 2014“).

Then, in personal emails to me, Spark makes plain my primary failing as a person and a thinker: I am a “populist and probably an anti-Semite” for expressing my views that it seems motivationally suspect that schools (and children) be treated as market commodities for billionaire investors to “hedge” and that to call this “philanthropy” is to treat philanthropy as one might treat snake oil. Suckers buy it

(subjects, i.e., that have normal and through the intestine-the liver. It binds tobe the-tale symptom of a disease tadalafil for sale.

When indicated oral therapy will probably become the cheap viagra online Other drugs under investigation include IC 351, a PDE V.

. Still, should we call suckers those thousands of minority children living in poverty and surely living in the tenements of those Corporate philanthropists who fund the great-hearted CEOs of charter corporations? Everyone is so giving in this ROI ecology!

Having been told I am a patsy for union pap who is “probably” an anti-Semite, “Clare’s Advice” to, tellingly, “whites and non-whites” (“the visible absence of color,” HM) strikes me as inconsistent at best:

I would advise concerned Americans to stop dwelling on past failures and errors, but to focus on a quality education for all children, neither idealizing nor demonizing those aspects of the Western past that are irrefutably “racist” and demeaning to non-whites.

This advice appears inapplicable to those Whites who are “demeaned” by irrefutable racism, but holds otherwise: Get over it, Black Folk!

Douglas Storm, without my permission, quoted my private emails to him. Caveat emptor. And he also accused Eva Moskowitz of taking [bribes] from billionaires, of whom I am apparently either a patsy or a filthy bourgeois. Another reason for my leaving the “Left.”

Please let me know if this is what I said in the post above.

I responded on her blog and my response was removed. Primarily, I accused no one of bribery and I quoted Spark’s “labeling” of me. I found it strange that she warns me with “buyer beware” having not bought or sold anything here (or is she warning herself for deigning to respond to me via email?).