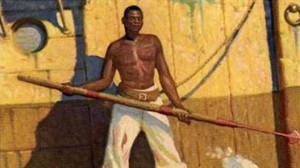 We live in a kind of false paradigm of “self-reliance.”  I don’t need to blame Waldo for this but perhaps he does bear a good bit of the burden for at the very least his is a kind of Bartlett’s for “individualism.”  Living having been usurped by business interests we are inundated with a sermonizing that mingles deified approval of selfishness with the fiction the “invisible hand” reaching out to balance greed on greed.  To serve your desires is proclaimed the highest good; the abstraction, we are assured, will do the moral work of serving others.

Previously it was shown how easily a verbal abstraction can acquit “selfishness” and go so far as to ally it with Power in Nature to appear “just by design.”  But, where Waldo skates upon the ambivalence of perspective as seen through the glass of a telescope, where sight, aided and abetted by distance, allows all sides to appear justified, Melville flails amidst the the blood and guts, the visceral now, finding truth (and the good) in the only place we can bear witness to actions and outcomes–our own lives.  Melville is attached to truth by the monkey rope.

I know it may seem excessive for a blog post to ask that you attend and ponder the words pulled out of that greatest of books, Moby Dick, in as unalloyed a form as possible (without my intrusion), but there can hardly be a rarer mind and talent than Melville’s.

This chapter (72), “The Monkey Rope,” is an even better answer to Emerson’s Self-Reliance.  But further, it is a somewhat complete lesson in political philosophy and economy: note the misguided interferences of Tashtego and Daggoo, something of the same from the absent Aunt Charity,  and the dialogue between Stubb and Starbuck.  Wisdom (as they say in church) be attentive.

In the tumultuous business of cutting in and attending to a whale, there is much running backwards and forwards among the crew. Now hands are wanted here,and then again hands are wanted there. There is no staying in any one place; for at one and the same time everything has to be done everywhere. It is much the same with him who endeavors the description of the scene. We must now retrace our way a little. It was mentioned that upon first breaking ground in the whale’s back, the blubber-hook was inserted into the original hole there cut by the spades of the mates. But how did so clumsy and weighty a mass as that same hook get fixed in that hole? It was inserted there by my particular friend Queequeg, whose duty it was, as harpooneer to descend upon the monster’s back for the special purpose referred to. But in very many cases, circumstances require that the harpooneer shall remain on the whale till the whole flensing or stripping operation is concluded. The whale be it observed, lies almost entirely submerged, excepting the immediate parts operated upon. So down there, some ten feet below the level of the deck, the poor harpooneer flounders about, half on the whale and half in the water, as the vast mass revolves like a tread-mill beneath him. On the occasion in question. Queequeg figured in the Highland costume — a shirt and socks — in which to my eyes, at least, he appeared to uncommon advantage; and no one had a better chance to observe him, as will presently be seen.

Being the savage’s bowsman, that is, the person who pulled the bow-oar in his boat (the second one from forward), it was my cheerful duty to attend upon him while taking that hard- scrabble scramble upon the dead whale’s back. You have seen Italian organ-boys holding a dancing-ape by a long cord. Just so, from the ship’s steep side, did I hold Queequeg down there in the sea, by what is technically called in the fishery a monkey-rope, attached to a strong strip of canvas belted round his waist.

It was a humorously perilous business for both of us. For, before we proceed further, it must be said that the monkey-rope was fast at both ends; fast to Queequeg’s broad canvas belt, and fast to my narrow leather one. So that for better or for worse, we two, for the time, were wedded; and should poor Queequeg sink to rise no more, then both usage and honor demanded, that instead of cutting the cord, it should drag me down to his wake. So, then, an elongated Siamese ligature united us. Queequeg was my own inseparable twin brother; nor could I any way get rid of the dangerous liabilities which the hempen bond entailed.

So strongly and metaphysically did I conceive of my situation then, that while earnestly watching his motions, I seemed distinctly to perceive that my own individuality was now merged in a joint stock company of two; that my free will had received a mortal wound; and that another’s mistake or misfortune might plunge innocent me into unmerited disaster and death. Therefore, I saw that here wa a sort of interregnum in Providence; for its even- handed equity never could have sanctioned so gross an injustice. and yet still further pondering — while I jerked him now and then from between the whale and the ship, which would threaten to jam him — still further pondering, I say, I saw that this situation of mine was the precise situation of every mortal that breathes; only, in most cases he, one way or other, has this Siamese connexion with a plurality of other mortals. If your banker breaks, you nap; if your apothecary by mistake sends you poison in your pills, you die. True, you may say that, by exceeding caution, you may possibly escape these and the multitudinous other evil chances of life. But handle Queequeg’s monkey-rope heedfully as I would, sometimes he jerked it so, that I came very near sliding overboard. Nor could I possibly forget that, do what I would I only had the management of it.

I have hinted that I would often jerk poor Queequeg from between the whale and the ship — where he would occasionally fall, from the incessant rolling and swaying of both. but this was not the only jamming jeopardy he was exposed to. Unappalled by the massacre made upon them during the night, the sharks now freshly and more keenly allured by the before pent blood which began to flow from the carcase — the rabid creatures swarmed round it like bees in a beehive.

And right in among those sharks was Queequeg; who often pushed them aside with his foundering feet. A thing altogether incredible were it not that attracted by such prey as a dead whale, the otherwise miscellaneously carnivorous shark will seldom touch a man.

Nevertheless, it may well be believed that since they have such a ravenous finger in the pie, it is deemed but wise to look sharp to them. Accordingly, besides the monkey-rope, with which I now and then jerked the poor fellow from too close a vicinity to the maw of what seemed a peculiarily ferocious shark — he was provided with still another protection. Suspended over the side in one of the stages, Tashtego and Daggoo continually flourished over his head a couple of keen whale-spades, wherewith they slaughtered as many sharks as they could reach. This procedure of theirs, to be sure, was very disinterested and benevolent of them. They meant Queequeg’s best happiness, I admit; but in their hasty zeal to befriend him, and from the circumstance that both he and the sharks were at times half hidden by the blood-muddied water, those indiscreet spades of theirs would come nearer to amputating a leg than a tail. But poor Queequeg, I suppose, straining and gasping there with that great iron hook — poor Queequeg, I suppose, only prayed to his Yojo, and gave up his life into the hands of his gods.

Well, well, my dear comrade and twin-brother, thought I, as I drew in and then slacked off the rope to every swell of the sea — what matters it, after all? are you not the precious image of each and all of us men in this whaling world? That unsounded ocean you gasp in, is Life; those sharks, your foes; those spades, your friends; and what between sharks and spades you are in a sad pickle and peril, poor lad.

But courage! there is good cheer in store for you, Queequeg. For now, as with blue lips and bloodshot eyes the exhausted savage at last climbs up the chains and stands all dripping and involuntarily trembling over the side; the steward advances, and with a benevolent, consolatory glance hands him — what? Some hot Cognac? No! hands him, ye gods! hands him a cup of tepid ginger and water!

‘Ginger? Do I smell ginger?’ suspiciously asked Stubb, coming near. ‘ Yes, this must be ginger,’ peering into the as yet untasted cup. then standing as if incredulous for a while, he calmly walked towards the astonished steward slowly saying, ‘Ginger? ginger? and will you have the goodness to tell me, Mr. Dough-Boy, where lies the virtue of ginger? Ginger! is ginger the sort of fuel you use, Dough-Boy, to kindle a fire in this shivering cannibal? Ginger! — what the devil is ginger? — sea-coal? fire- wood? — lucifer matches? — tinder? — gunpowder? — what the devil is ginger, I say, that you offer this cup to our poor Queequeg here?’

‘There is some sneaking Temperance Society movement about this business,’ he suddenly added, now approaching Starbuck, who had just come from forward. ‘Will you look at the kannakin sir; smell of it, if you please.’ Then watching the mate’s countenance, he added: ‘The steward, Mr. Starbuck, had the face to offer that calomel and jalap to Queequeg, there, this instant off the whale. Is the steward an apothecary, sir? and may I ask whether this is the sort of bitters by which he blows back the life into a half-drowned man?’

‘I trust now,’ said Starbuck, ‘it is poor stuff enough.’

‘Aye,aye, steward,’ cried Stuff, ‘we’ll teach you to drug a harpooneer; none of your apothecary’s medicine here; you want to poison us, do ye? You have got our insurances on our lives and want to murder us all, and pocket the proceeds, do ye?’

‘It was not me,’ cried Dough-Boy, ‘it was Aunt Charity that brought the ginger on board; and bade me never give the harpooneer any spirits, but only this ginger-jub — so she called it.’

‘Ginger- jub! you gingerly rascal! take that! and run along with ye to the lockers, and get something better. I hope I do no wrong, Mr. Starbuck. It is the captain’s orders — grog for the harpooneer on a whale.’

‘Oh, I never hurt when I hit, except when I hit a whale or something of that sort; and this fellow’s a weasel. What were you about saying, sir?’

‘Only this; go down with him, and get what thou wantest thyself.’

When Stubb reappeared, he came with a dark flask in one hand, and a sort of tea-caddy in the other. The first contained strong spirits, and was handed to Queequeg; the second was Aunt Charity’s gift, and that was freely given to the waves.