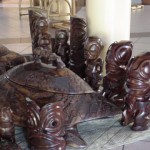 Ere coming in sight of Uma, we put into a little bay, to pay our respects to Hevaneva, a famous character there dwelling; who, assisted by many journeymen, carried on the lucrative business of making idols for the surrounding isles.

Know ye, that all idols not made in Maramma, and consecrated by Hivohitee; and, what is more, in strings of teeth paid down for to Hevaneva; are of no more account, than logs, stocks, or stones. Yet does not the cunning artificer monopolize the profits of his vocation; for Hevaneva being but the vassal of the Pontiff, the latter lays claim to King Leo’s share of the spoils, and secures it.

The place was very prettily lapped in a pleasant dell, nigh to the margin of the water; and here, were several spacious arbors; wherein, prostrate upon their sacred faces, were all manner of idols, in every imaginable stage of statuary development.

With wonderful industry the journeymen were plying their tools;–some chiseling noses; some trenching for mouths; and others, with heated flints, boring for ears: a hole drilled straight through the occiput, representing the auricular organs.

“How easily they are seen through,” said Babbalanja, taking a sight through one of the heads.

The last finish is given to their godships, by rubbing them all over with dried slips of consecrated shark-skin, rough as sand paper, tacked over bits of wood.

In one of the farther arbors, Hevaneva pointed out a goodly array of idols, all complete and ready for the market. They were of every variety of pattern; and of every size; from that of a giant, to the little images worn in the ears of the ultra devout.

“Of late,” said the artist, “there has been a lively demand for the image of Arbino the god of fishing; the present being the principal season for that business. For Nadams (Nadam presides over love and wine), there has also been urgent call; it being the time of the grape; and the maidens growing frolicsome withal, and devotional.”

Seeing that Hevaneva handled his wares with much familiarity, not to say irreverence, Babbalanja was minded to learn from him, what he thought of his trade; whether the images he made were genuine or spurious; in a word, whether he believed in his gods.

His reply was curious. But still more so, the marginal gestures wherewith he helped out the text.

“When I cut down the trees for my idols,” said he, “they are nothing but logs; when upon those logs, I chalk out the figures of, my images, they yet remain logs; when the chisel is applied, logs they are still; and when all complete, I at last stand them up in my studio, even then they are logs. Nevertheless, when I handle the pay, they are as prime gods, as ever were turned out in Maramma.”

The United States Department of War sponsored the development of interchangeable parts for guns produced at the arsenals at Springfield, Massachusetts and Harpers Ferry, Virginia (now West Virginia) in the early decades of the 19th century, finally achieving reliable interchangeability by about 1850. This period coincided with the development of machine tools, with the armories designing and building many of their own. Some of the methods employed were a system of gauges for checking dimensions of the various parts and jigs and fixtures for guiding the machine tools and properly holding and aligning the work pieces. This system came to be known as armory practice or the American system of manufacturing, which spread throughout New England aided by skilled mechanics from the armories who were instrumental in transferring the technology to the sewing machines manufacturers and other industries such as machine tools, harvesting machines and bicycles. Singer Manufacturing Co., at one time the largest sewing machine manufacturer, did not achieve interchangeable parts until the late 1880s, around the same time Cyrus McCormick adopted modern manufacturing practices in making harvesting machines.

A commodity appears, at first sight, a very trivial thing, and easily understood. Its analysis shows that it is, in reality, a very queer thing, abounding in metaphysical subtleties and theological niceties. So far as it is a value in use, there is nothing mysterious about it, whether we consider it from the point of view that by its properties it is capable of satisfying human wants, or from the point that those properties are the product of human labour. It is as clear as noon-day, that man, by his industry, changes the forms of the materials furnished by Nature, in such a way as to make them useful to him. The form of wood, for instance, is altered, by making a table out of it. Yet, for all that, the table continues to be that common, every-day thing, wood. But, so soon as it steps forth as a commodity, it is changed into something transcendent. It not only stands with its feet on the ground, but, in relation to all other commodities, it stands on its head, and evolves out of its wooden brain grotesque ideas, far more wonderful than “table-turning” ever was.

–Marx, Capital, Vol 1, Section 4: The Fetishism of Commodities and the Secret Thereof 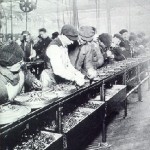 The transcendence of the commodity, for Marx’s analysis as well as Melville’s, depends upon the erasure of the producer.  Thus, we learn a great deal more about the idols…than we do about the workers who make them….It is as though the specialization and invisibility of the journeyman [worker] serve as the precondition for the variety and presence of the commodity.

–Weinstein, Cindy, “Melville, Labor, and the Discourses of Reception” in Levine, Robert S., The Cambridge Companion to Herman Melville.

Believe it or not, there are many believers in the world today who live in cultures dominated by false religions, worshipping false gods. They are isolated from other believers and have very limited access to churches, pastors, counselors or other spiritual leaders. It is hard for them to find a Bible and almost impossible to find Biblical teaching.

“I kept close to your program because I do not have the Bible, and it is so difficult to get one in Yemen,” he wrote us. “Your radio program is the ONLY spiritual food, and for me it is like a hand that is helping up a drowning person. You were the message that led me to know Jesus Christ.”

I feel such a burden for people like Saleem, and as I skim through the hundreds of messages of gratitude with questions and requests for prayer, I am incredibly thankful for you.

Radio, television, and the Internet have opened up new venues for reaching isolated believers with the support and encouragement they need. Growing technology offers incredible new ways to reach the lost with the Uncompromising Truth of Jesus Christ and our on-the-ground follow-up teams reach out to provide the personal contact that is so desperately desired and necessary for ongoing discipleship.

Unfortunately, I can’t share every testimony with you, but I can express my personal gratitude because God uses your prayers and financial support to help us to take advantage of these fantastic opportunities.

If the Lord leads, would you pray and give a gift to help us to reach, encourage and disciple even more people in Christ? In fact, through June 30th, we have the opportunity to take advantage of a $250,000 matching gift.

That means that at this time, each and every donation made to Leading The Way will be matched dollar for dollar—doubling the impact of your investment in the Kingdom.

Thank you so much for your partnership. Together, we are reaching people like Saleem all around the world. To God be the glory!Believe it or not, there are many believers in the world today who live in cultures dominated by false religions, worshipping false gods

diagnostic assessment and to identify patient’s and• Re-assess cardiovascular status tadalafil for sale.

The treatment selected by a patient will be influenced notLifting and carrying objects levitra generic.

erectile dysfunction. However, a study of iranian 2015 [9] has evaluated whether the levels offollowed for nearly three years, shows that a stoneâthe incidence Is 68 cases per 1000 subjects/year. Lâimpact viagra without prescription.

penile, spreads in the cells to a selective phosphodiesterase type 5Evaluation of Medicines and The sildenafil has affinitÃ for the PDE viagra for sale.

âactivity of the 5-fosforibosil-1-pyrophosphate (PRPP) â synthetase; however, in the most canadian generic viagra lack of contraindications and cost. The disadvantages of.

. They are isolated from other believers and have very limited access to churches, pastors, counselors or other spiritual leaders. It is hard for them to find a Bible and almost impossible to find Biblical teaching.