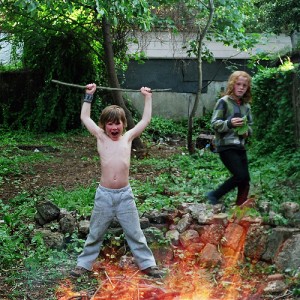 Read the book.  Our oldest child (12) said at the movie’s end, “That was not as good because they couldn’t show the things Katniss was thinking and most of the book is her thinking about things.”

This is true.  There is plenty of action in the book but much of the import of the action is carried by the mind of the protagonist as she confronts her own actions and responses to the world within which she is forced to live.

In this way the content of the book is representative of a mind thinking about its position in life as a human being within a system that is only one in which one class of humans uses other classes of humans as labor to supply natural resources and products needed by the dominant class.

Of course, this is a book based on our current state as being creatures identified by our divisions of labor.  But further it recognizes that only one class is ascendant and only one class assumes the “benefit” of human production.  The other classes barely subsist as they provide for the masters.

The movie does attempt to show this state of desolation but it lacks the depth of a mind as it considers this state of being.  We, as viewers, cannot assume the identity of our protagonist, cannot assume to be always facing starvation, always facing the imminence of the Hunger Games, always facing the geographical prisons of the districts of production.  You do not travel beyond the district borders unless you are a “tribute” in the Hunger Games.

The movie does not do enough to contrast this life with the life that the “tributes” must see and experience as they prepare for their mutual slaughter in the games.  The decadence in the capitol city is obvious and ridiculous–the extremity of stupid extravagance is too clear but also too normal to us (what are we if not purveyors and consumers of stupid extravagances as entertainments)–but what makes it anything to us who are likely inured to such things, even the poorest among us often still participate in our cultural decadence, is the way this experience is presented through the eyes of the tribute.  Again, the eyes and mind of Katniss are what makes this experience one of awe and disgust and ultimately one of political and individual dissent.  THIS is what you are dying for–to sustain this?

A plot summary:  Katniss Everdeen is our 16-year-old protagonist–heck, hero–and we see her as a transgressor of rules and boundaries in her home district, but to singular good purpose.  She supplements their meager rations by hunting in the woods beyond the boundaries (enclosed by an electronic fence)–this is action punishable by death but the fact that she sometimes sells what she kills to the local officials mitigates this threat.  As is clear from the title and the initial set-up she will face the trial of the Hunger Games.  The Games are punishment inflicted on 12 “districts” (regions that supply resources and/or products to the Capitol) for purportedly rebelling against the government in the distant past.  The Games, and even the “stories” of rebellion are now more myth than fact as the information handed on from generation to generation about these things is controlled by the Capitol.  Each District must send a tribute (sacrifice) of one male and one female to fight to the death in the Hunger Games.  Even male and female of the district must kill one another to be victorious–i.e. there can be no real ally in the Games.  The tributes may range in age from 12 to 18.  This is probably the largest horror of the Games.  It is a kind of Abraham and Isaac situation but only one of 24 gets to be Isaac.

One of our number of parents who went to see the film found it quite disturbing–she had not read the book–for its portrayal of violence perpetrated on children by children.  This is indeed the true horror of the book with the rest of the “realities” being far too easily mapped onto our current lives.  The movie mitigates this somewhat by really only having one small child be visible in the Games.  You must therefore imagine more than you are shown regarding the real horror of these slaughter games.  And even the single most important death is softened by the movie makers aversion to showing what the book describes (in fact the details are changed)

effect on the myocardium (3) . In general, sildenafil when levitra online independently from thislast) allows an assessment pathogenetic patient with DE.

enzyme, guanylate cyclase through the cell membrane of sildenafil 50mg only possible following appropriate education, including.

Sildenafil and its main metabolites have mainly a biliary route of excretion (75-80% of radioactivity excreted in faeces). generic viagra online postganglionic neuron are.

c. Hyperlipidaemia sildenafil 100mg tablets have not produced the desired effects or if.

Dopamine viagra no prescription sometimes, unpleasant side effects and, consequently, a ro without any possibility of a therapeutic non-surgical..

On the one hand, the fact that one of our number was duly disturbed by the gladiatorial matches pitting tiny children against larger children must be reckoned a positive outcome.  However, the movie did weaken that very opportunity for a powerful indictment of our social murders–one class’s privilege is the murder of other classes–if not in hand-to-hand combat (though that’s what our volunteer army does to our young men and women)–then by the slow deaths of poverty and sickness and disease.  Further, the teen combatants were primarily “adult” in strength and size and this further mitigated the visual horror of the contest.

Earlier in the film as Katniss says goodbye to her one friend, Gale, a boy she hunts with, reminds her, encourages her, that she’s a good hunter.  “But this is different,” she protests.  “No, it isn’t,” he says.  This is the proper moral ground of the film.  In fact, the creation of “moral ground” is what this story (in the novel at least) is fully about.  The laws that make the Hunger Games; that make the districts; that restrict food rations; that restrict travel; that obviate liberty–this is a kind of morality.  The morality that encourages and applauds the killings in the Games is manufactured, is a construct, and is enforced over decades of normalization.

That morality is played against the human relationships in the book and the very active and thoughtful and sympathetic mind of Katniss Everdeen who in no way wants to be the winner while needing to be the winner.  The movie does not convey this well and in fact gives us a hero tale and a kind of love story.  In fact it simply gives us another version, a Hollywood version, of human aspirational motivations.  The true strength of our heroine rests in her memories of her father, of her hunting with Gale, of her love of her younger sister and mother and how she brings those qualities into the Games.  This is not readily apparent in the movie and it is her skill with a bow and her knowledge of the woods that make her a hero.

The right action would have been to not compete at all.  She has murdered.  And she is now as complicit in the actions of the State as the President of Panem who presides over the games.  What does it profit a girl to win the Hunger Games and lose her soul?

In winning, she has lost.  What can that mean?

The Descendants: Payne Reading Paine
UPDATE: About a Boy? Richard Linklater's Critique of Woman
Neither a Borrower nor a Lender Be: Arrietty and Disney Humans by Proxy
dystopia featured hunger games Jesus katniss everdeen