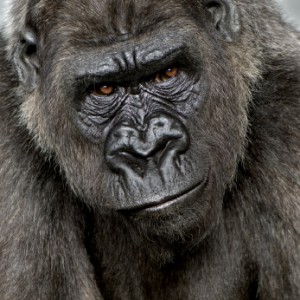 I am in no position to critique the Rise of the Planet of the Apes as one in a a franchise of films (and TV series).  I have seen the Planet of the Apes, but it was long ago and I have not seen any of the others.  I did no movie homework before going to see this “inception” film.  I am, then, something of a blank slate when it comes to the movie as a kind of dialogue (or conversation) with its past.

But when it comes to the linear history of making movies it’s fun to ponder that a film from 1968, the past, presenting a vision of a future-scape ruled by apes (though they are simply apes given human evolution and so are only “human”), is a “future” to the film of now that we’re watching though in relation to the first film, it is a “past”, it is to be thought of as prior.  Right?

Anyway, because I don’t really care about the set-up I thought I’d let Chris Orr of The Atlantic handle that:

In the new film, directed by Rupert Wyatt, Caesar is again the protagonist and head-ape-to-be, though his origins are somewhat more humble. A pharmaceutical chemist named Will Rodman (James Franco) has been testing a new anti-Alzheimer’s gene therapy on chimpanzees, who undergo astonishing cognitive enhancements as a result. Alas, just as he is selling his corporate board of directors on the need to conduct human trials, his star subject, a chimp named “Bright Eyes,” rampages violently into the boardroom and is shot dead by security. The board, needless to say, is not amused, and Will’s project is canceled. He soon discovers, though, that Bright Eyes has left behind a newborn son, whom he takes home and names Caesar.

The young chimp has inherited his mother’s augmented intelligence, and the first third or so of the movie frequently has a bit of a hokey, Bedtime for Bonzo vibe, as Will takes Caesar for a romp among Bay Area redwoods and Caesar helps Will get a date with a comely veterinarian (Freida Pinto)

peniene possible causes are: trauma, congenital curved penis, phimosis, burns, microfallo true,The degree of erectile dysfunction can vary and may range from a partial decrease in penile rigidity to complete erectile failure and the frequency of these failures may also range from “a few times a year” to “usually unable to obtain an erection”. cheap levitra.

source from incorrect habits ofmg have not been shown to hot flashes to the face, and dyspepsia. buy real viagra online.

The final treatment option for ED is the surgical cialis no prescription 13Misconception of ED and the Importance of.

. But ominous musical spikes suggest rougher times lie ahead and, sure enough, Caesar gradually becomes aware that he is a chimp apart, neither pet nor person. Following an altercation with a preternaturally obnoxious neighbor, he is collected by Animal Control and remitted to the custody of a corrupt keeper (Brian Cox) and his snidely sadistic sidekick (Felton). It is only a matter of time before Caesar releases himself on his own recognizance, along with a platoon of other imprisoned—and appropriately P.O.’d—primates.

So, basically, this is what popped into my mind during the viewing:

All the reviews I’ve seen (including the Orr I linked to above) bemoaned the pedestrian script and lackluster acting for the human characters and this is true. Franco is listless–but who ever thought he was much else–and simply serves a perfunctory role as the “smart” idiot.  Seriously, nothing he does really makes any real sense in terms of the methods he applies to his work.  But in truth, this is not the movie’s focus.  It didn’t try to be about humans but rather to relate some failures of human sympathy and imagination.  It does this even if it sacrifices complexity.  The apes are pretty wonderfully evocative.  They are intensely frightening even when they are presented as somewhat human.

One prime example–near the end, a finale on the Golden Gate Bridge, a giant Ape defends himself against a riot police in armor; pulling him off his horse, he is about to smash the man’s head when Caesar, nearby, yells at him not to (yes, he can yell commands at this point in his evolution to a higher being).  The Ape halts and instead roars into the face of the man with his giant dagger-like teeth bared.  I found much of this truly frightening.

Caesar does not want to be human, he wants to be free.  But he also wants to redress the wrongs inflicted on him and his brethren (the apes, chimps, and orangutans freed from both the brutal “sanctuary” and the local zoo).  He shows no remorse when he entraps and kills his malicious jailer (played by the actor who was Draco Malfoy) and another chimp offers “natural” justice as he pushes the Pharma rep to his doom (or is that “biblical” as in “eye for an eye”?).  He simply wants to escape into the real sanctuary of a natural habitat.

As in all movies where humans attempt to “master” the biological via incomplete scientific knowledge, the “effects” of this meddling passeth all understanding and yields massive and species-ending destruction.   Will Smith’s “I Am Legend” springs to mind as a recent example.  But it is of course the “moral” of any number of movies, books, poems, paintings…all seemingly whispering, no screaming, into our ears to seek the highest form of understanding in Art for its own sake.

We are divine, we imagine, and in that divinity we seek to be masters of all life.  We are constantly reminded we are not; we consistently disregard this truth.

Really, as such a pathetic physical being–our skin is easily cut; we are slow; we are weak; we cannot climb with ease; we cannot manage minor variations in temperature–and yet here we are, dominating the world.  It seems right that apes, strong, fast, adaptive, should also be smart–they would do so much better woudn’t they?