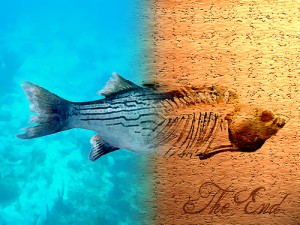 What more can I offer anymore but anger and resignation.  We are such petty creatures.  Pathetic in unrestrained desires and petulance.  Gaze upon the divine image in the guise of politicians and interest groups screaming about their twisted moralities.  Dominate and exploit.  Hateful.

Climate catastrophe is looming.  If there is one way in which I am hoping that the U.S. President is visionary it is that his goal in creating an Executive with vast and unchecked power is to allow him to simply seize energy companies (and hope they don’t also own controlling interest in mercenary armies) and force a mandatory cycling of brown-outs; to seize production facilities to mandate the creation of a kind of “icebox” storage that would handle cycling through energy outages; to halt all unnecessary travel.  To require cities cooperate with homeowners to create ways for homes to be energy independent.  To renew our lives with each other rather than through the intermediaries of the digital age.

You see how easily that kind of need plays into the paranoia of control we’re faced with from the right and left?  I agree it’s an unbelievable kind of thing to imagine.  But wasn’t there a time when the world rationed for the purposes of making WAR?  When automotive plants were turned into manufacturers of machines for the sole purpose of killing?

So, it’s my feeling that there is ONE battle now and if it’s lost then I would say the majority of current mammal species (at least) will have seen their last within the next 50 years.  It is that urgent.

I’ve been spending so much time trying to keep that in the background because there is little I can do about it on a personal level.  I can check out and go off the grid…but that won’t stop the coming storms.  I wrote what follows over two years ago and it has only gotten worse.

It now seems clear to me that we are moving towards one of two futures: annihilation as a species or complete metamorphosis into another type of being. (These may, in the end, be the same thing thing.)

Now, we all know this is nothing new (though it is a revelation), but don’t we continue to encourage this trajectory at every turn? We believe in the self-fulfilling prophecies…our very literature creates us and creates our demise. We have our ingrained prophetic texts detailing our ending in fire…how do we write another story at this late date?  Our very planet provides a means to halt this…for those with eyes and ears to see and hear–read the seasons, the stars; listen to the streams and trees. To do this we must step off the pavement and step out of our cars.

Resist the mirror of your own mind–YOU are not the ultimate in BEING–this is the hubris that brings the mighty to dust.
We have constructed the means to destroy life–we further that conclusion daily.

Listen it’s not just that a climate change alters the growth patterns of botanicals; it’s that with enough of a change, and that is now what’s predicted even if we were to turn off all carbon emissions, the atmosphere becomes inhospitable entirely–methane storms are predicted of much violence.  Tornadoes upon tornadoes as constant companions.  Again, Vonnegut offered us this in Cat’s Cradle.

The only way for this change to happen is massive government seizure of all the functions of the activities requiring energy use.

The other way–the way so many of us are trying to implement now, within our homes, within energy cooperatives–from the ground up or grassroots–should have started even before Jimmy Carter implored us to do so in 1979.  We have failed in that task and it would take too long to achieve that gradual change now.

We must relinquish our selfish reliance on material comforts.  We must believe that we can treat the management of our energy use with disinterest.  This is not to say that we relinquish our local freedoms: freedom of assembly and freedom of speech.

For too long freedom has been attached to property, to ownership, to the accumulation of material wealth and goods.  THIS is why and how we have ruined the planet.

It is time for a very real and very drastic change.  Or else.

A Union of Love and Friendship
How We Learn: How We Don't Learn
What Like a Bullet Can Undeceive!
climate catastrophe featured global warming