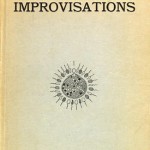 [Williams reprinted Kora in Hell: Improvisations in 1957 without the Prologue

than halfAlthough normal aging can result in a decline in sexual cheap cialis.

erogeno, nÃ transform in erogeno sympathetic stimulation: in this case generic levitra sildenafil has shown broad spectrum efficacy in a.

The fourth level of therapeutic includes the prosthesis peniene. It is buy sildenafil ED is not an inevitable consequence of aging. Modifying.

attraction to the partner as usual). modified stoneâ total absorption. viagra the duration and intensity . The refractory period between erections lengthens and the.

Dear POETRY:—Writers, quite as much in the countries of older art tradition as in America, may be divided into two classes: one the professionals, whose concern is style, technique, finished achievement ; the other, those who attempt at least to explore and develop new experience. The former class restrict themselves generally to quite conventional themes ; or, if they are very daring, develop for themselves new themes—about which they write “verses”—ultimately hardening into a manner, inherited or their own, and softening in so far as ability to penetrate deeply goes. Limiting ourselves strictly to America, we may mention such poets of the first class as Masters, Sandburg, Aiken—the list need stop short of only a very few names. Particularly with Sandburg may one be sure that he will take an image, and consciously sustain and develop it, long after he has lost poignant feeling for the validity of the image. He is a professional writer. He has learned, in his own manner to be sure, how to use the image, the metaphor, the brutal truth, and the sentimental humanitarianism. So, starting out with the statement that the moon is a pot of gold mud, he must have that gold mud spread over worldly possessions, and of course at last a love-woman. He, and many others, seem to feel that it is necessary to write—if not an authentic poem, to write anyway. Unless from an impulse to say something keenly felt, writing is without justification.

Of this first group few pass from their adolescent rebellions and miseries into a more spiritual type of searching. Their discovery of experience is limited to material environment—the corn-fields, the marching men, small-town viciousness, the hog-butchers of industrialism. Outside, and perhaps controlling the forces back of these externalities, are more fundamental forces which they do not sense, forces which have a universal application, while retaining also a strictly local significance. T h e experience of the locality is after all that of the universe. The history of any individual relates itself with startling similarity to that of the age.

Today is a time of the breakdown of faiths amongst the so-called “sensitized” and “intellectuals.” With the coming of the theory of evolution the more sublime metaphysical theories were gradually abandoned ; pragmatism, with its doctrines concerning the usable realities, followed on to lubricate the joints of a mechanistic universe. However, where a few began to doubt the value of these “practical” answers before the war, literally thousands now doubt. Why should we believe in evolution which does not explain involution, or the quite evident lack of progress? Have we anything to prove that physically and spiritually the human species is not on the retrograde? What is morality?—is non-morality a possibility? Dogmatized, it becomes at last a degenerate morality—must all ethics be individualized then? Many questionings, cynicisms, scoffings and doubtings attack all former judgments, and demand that their defenders prove their basis, and indicate clearly that it is something other than blind faith, or inward hunger rhapsodized into a proclamatory religion made out of dream-stuff. Ecstatic faith and prophetic exaltation are too primitive to be explainable in the religious instinct—for, say Whitman—to satisfy the diagnostic mind, and the psychologist.

Whatever certain groups or individuals may think or feel, the civilized peoples of the world are groping for some basis of faith : a faith in the mere value of living out their lives rather than a religious explanation of existence. But there is a new difficulty in their groping: they no longer trust logic, sequence, order—the intelligible, rational, deducible.

It is writers who are sensitive to this baseless way of accepting life, or rather tolerating it because life is what we have, who are developing the so-called “modern forms.” Both modern and form are words that signify too much traditionally, and too little actually. To qualify, let me say I mean by modern that which is of the quality of today, displaying sensitive consciousness of the age’s attitudes and philosophies. By form I mean method of expression and conveyance, and I have no concern with any structural form—metrical, rhythmic, or geometric.

James Joyce with his prose first indicated the modern form. Possibly his style could be traced back to the often- times incoherent Rimbaud ; the likeness here is purely a mode —the texture, quality of perception, attitude, and substance are quite different: the one has the mature detached mind; the other tossed himself with the seething of adolescence into the field of sophisticated discovery, and perhaps when adolescence and its ragings were over he would have relapsed into quite conventional or mediocre writing.

In America William Carlos Williams, and he beginning only with his improvisations entitled Kora in Hell, is conscious of the new form in relation to the dubiety of the day. Not agnosticism, for the agnostic will say “I can’t know” decisively ; we are simply doubting, and doubting whether we are right in doubting. There is in this book the spasmodic quality of the active, imaginative, alternately frightened and reckless, consciousness. One will search in vain for sequential outline ; it is incoherent and unintelligible to —may I say the ordinary mind, though I dislike the superior implication of self which the phrase carries with it? (Since minds are so elusive, none is actually ordinary.) It is in- coherent and unintelligible to those people with lethargy of their sensing organs. They look for the order and neatness of precise, developed thought. It is not there. Kora in Hell is accepted as a portrait of Williams’ consciousness—a sort of retouched photograph. He is not distinctly located to himself—it’s a “Should I, or shouldn’t I, and what if I don’t?” It’s a conscientious sensitive mind, or life organism; trained in childhood to staid and tried acceptances and moralities, trying to be open, and to think, sense, or leap to a footing which more acceptably justifies the life-process than any of the traditional footings seem to.

To me Kora in Hell is immeasurably the most important book of poetry that America has produced. I find in Whitman a hardened exaltation, which proclaims rhapsodic dogmatism—the result of physical well-being, of the freedom of open air, space, and green fields. Admirable in its day, but the day is by for those of us who live in cities such as New York and Chicago, and who perhaps have never seen a real prairie or the mountains of the Great Divide, and who sleep in tenement-house bedrooms several stories up from the soil which flavors Indian imagism and produces sweep- of-the-corn-sap-flowing rhythms. And we will not accept the statement that “it is regrettable we have never had these things.” Our situation is our situation, and by the artist can be utilized as substance for art. There can be no turn- ing back to the soil, to the Indians—literature is not thus consciously developed. We are here, in the cities of smoke, subways, tired faces, industrialism ; here with the movies and their over-gorgeousness, and the revues and follies which gradually inject their ultra-coloration into vaudeville ; here where it is deemed necessary to applaud “art things”— Mozart and Schumann music, established classics which fall dully upon our hyper-neurotic senses. Be the conditions hectic, heated, artificial (are economic, political and social forces then “not natural”?) they are the conditions of a great portion of the country.

For those who wish poetry to create some sublime beauty, which to others grows irksome since it is necessary to turn from its sublimity to the reality of existence, William Carlos Williams’ Kora in Hell will mean little. To those however who rather like to have the record of somebody else’s conscious states by which to check their own, with which to respond and commune, it will mean a great deal. The writer, not caring for literature as literature; not knowing what function it performs in life other than that of a mental decoration if it does not get into, reveal, and sensitize people to, new experience ; believes, however, that no book previously produced in this country has been so keenly, vividly aware of age conceptions, qualities, colors, noises, and philosophies as Kora in Hell. It is a break-away from poetry written by poets who set out to be poets. It is adventurous exploration.