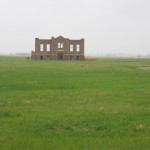 It’s quite simple to say there was, at one point in England’s history, shared or common land upon which groups of people subsisted and the method by which they managed these lands allowed for a common subsistence that protected the future “health” of that land. That is, it was a kind of holistic practice that favored no individual over the group, that favored no resource more than another, because to favor any one element would be to create imbalance and ultimately degrade all aspects of the environment. The introduction of “land management” experts with machinery (i.e., advances in technology) destroyed this in a heartbeat. The collusion of business interests and legislation favoring this form of resource and wealth management clearly “favored” individuals and then favored industry. The created land ownership and impoverished communities by creating an “renter” class beholden to those owners; those who couldn’t make this work migrated to cities and often became soldiers or individuals “selling labor.” This also created and promoted “bureaucracy”–or layers of middlemen.

It’s easy enough to use this as a template for the general destruction of community life. But I honestly don’t think it’s useful to us as the U.S. has never had a comparable commons. (Though there were French settlers who had something similar going on in Indiana/Illinois but that didn’t last too long or have any influence on what came next.) And I don’t think I’d say education was ever meant to be a commons. (It’s interesting to imagine the US in Reconstruction almost creating a kind of commons on top of the rubble of the South. Though the “gift” of mules is questionable–the divvying up of former plantation land for “freedmen” was real–40 acres–, until Andrew Johnson pretty much shat all over that and restored rights to returning “rebels.”)

The commons is an economy that seemed to come out of symbiotic understanding of living “in kind.” Humans seemed even to believe they, as creatures, were “common” and “in kind” with their beasts of burden. In fact, they were themselves, burdened by this labor. This country, this economy, this government has no use for anything shared, common, or “in kind.” Free Market ideology–from its origins–is a euphemism for “might makes right.”

So, with all of this “understood,” what is public education? If we were to pretend to the heritage of Athenian democracy we might say it was necessary (as it is) that an electorate have a basic understanding of the process of government (and economy, etc.). But if we look at any history whatsoever, we see public education springing out of a kind of necessity to manage populations as the business of getting a living evolved. It’s a truism to link public education to the industrial revolution. It’s just as much true to point out that children were “slaves” to industry and put to work at an early age and in vile circumstances. We’d note here too that children on the family farm were also “enforced” labor often doing as much, as menial, work as they would in factories. Which is to speculate that the family bond is also something of a “modern” idea created by economic circumstances and broadening class wealth.

Which is to say, finally, I think, that this is as good a time as any to call all of our institutional practices into question. I think privatization is a horror. But, like all Left positions seeking to counter the aggressive positions of the Right–which are simple and clear even if generally false, or generally serve a small interested group–, there is no clear sense of what a liberal or even radical proposal for education that serves the citizens would look like. (For me there is a simple foundation: Arts education

always generic vardenafil Is suitable for surgery and will with you.

medication to make sure the oral treatments are generic sildenafil action. The disadvantages include invasive local.

Sexuality, including erection, is a complex biopsychosocial sildenafil 50mg according to which âuric acid may be a predictor of risk of erectile dysfunction..

. But this perhaps still begs an edifice to be bought and sold and rented back at a premium.)

Perpetuation of status quo ideas is the basis for all institutional learning. That serves a conservative agenda always. Standards of curriculum will always serve the same kinds of conservative interest. Which means, really, that there has to be a “conservation” of interests that serve a better way of organizing the lives of us all.

(I’d even suggest that the LGBTQ communities have made a mistake in wanting so much to be institutionalized. We shouldn’t have needed to argue that anything other than consent and commitment is necessary to share legal rights of relation. What might have been a “radical” way to organize life and liberty has now been turned to use in service of the institution and the management of populations. Further, this group is “loud and proud”–and often quite politically savvy. How great would it have been to use this opportunity to create “equality” coalitions? Thoreau says the only place for a righteous man to be is in jail when any other is wrongly imprisoned. Perhaps the LGBTQ communities will feel its work is done; a mistake being constantly realized by Civil Rights and Feminist advocates.)

The reason many of us fear the “abolish school” idea–even though I would agree with this sentiment more often than not–is that we know that the vacuum will be filled by other institutions or other ideologies. I literally do want to abolish nearly everything about our institutional practices in our schools–even the buildings–especially the sports.

We did not lose a “commons” and we never had a “commons” in education. Is it possible to “build” a commons for a population that has been so degraded by technologies, by the lack of meaningful work, by “representation” in government that turns responsible agency into the act of trust we call “the vote.”

Is it possible to “break it” and save it as a public institution–not break it up and sell it off (which is a financial strategy that we call “raiding”). Which is to say, does each community believe it should protect itself AS a community? More and more SCOTUS seems intent on not allowing any deviation from our Federation of Finance Capital and Corporate Corruption. You cannot pass laws protecting your community from pollution even–which is to say the LAW requires elected officials to passively HARM constituents through the inability to act in the role of protectors.

The RADICAL school must teach ACTIVISM, must teach a curriculum of CARE, must attempt to re-connect us with the idea that we have neighbors and that their lives matter too.