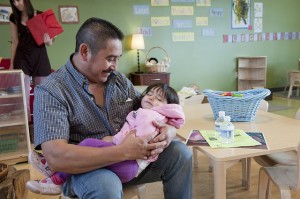 Why do “philanthropists” want to “deliver on the American promise of equal opportunity by working to attack the achievement gap that takes root early in life and puts children in poverty at great disadvantage?”  (Educare website)

Every word a philanthropist organization utters must be understood as a kind of duplicity.  Listen.

That (reducing “achievement gaps”) goal is now embraced by other major philanthropists – the Irving Harris Foundation, Pritzker Children’s Initiative, the W.K. Kellogg Foundation, the George Kaiser Family Foundation, the Bill and Melinda Gates Foundation – who are investing in an integrated strategy of practice, policy and research that is changing the way America thinks about early childhood education.

To what end do philanthropists invest?  Definitionally, the word (a word that those Educare students will be able to define and use in a sentence by pre-k) suggests out of benevolence and charity and for the good of “mankind.”

The problems here are manifold in terms of how we make sense of any of the above.  Folks invest to gain a return on that investment.  Folks with gobs of money don’t just invest, they make therefore their own world!  To do so they must strategize, make policy (get their policies adopted as laws) and make (buy, fund) think-tank “research” that will serve as the rationalizing buttress for their world-ownership.  (ASIDE: In reading to the children out of the last book in the Alchemyst series by Michael Scott I FINALLY realized the “Elders” in the book were intended to represent our Oligarchical masters.  The Buffets, Waltons, Kaisers, Kerns, Gates, Kochs, etc., are, in these YA novels, the immensely powerful masters of all creatures who manipulate and dominate every aspect of existence.  They are represented as creatures out of mythology as gods and demigods–from Anubis to Osiris to Prometheus.  Still more interesting is that Scott shows us good and bad elders.  This is a confusion.  There are only masters and slaves.  The “benevolence” of the masters does not change that fact.)

It can be argued that a philanthropist “loves” his/her species and NOT the singular creature, the human being.  In that regard we can easily conceive the philanthropist as one who has lots of dough to use to protect the species as he/she conceives it worthy of protecting.

Here is a snippet from the annual report of the Susan Buffett Early Childhood Fund to offer an example of the ends of social benevolence (h/t Doug Martin):

Dr. James Heckman, a Nobel laureate in economics at the University of Chicago, is making progress on another front: spotlighting the hard-nosed economic returns of investing in very early childhood, especially in tight fiscal times. He calculates a 10 percent rate of return. That’s welcome news, particularly for lawmakers wrestling with the three basic ways to address the country’s budget woes: reforming revenue, cutting costs, investing in a growth strategy. Investing in early learning is key to at least two of those three avenues—cutting big costs down the road in terms of special education, remedial education, repeating grades, and so on; and boosting growth by helping to build a better educated and more productive workforce. I could even argue that investing in high-quality early education contributes to revenue reform, as well. By helping to nurture a generation of better prepared students and workers we are helping to create the next generation of families who pay taxes rather than need programs supported by taxes.

How is it that the U of Chicago is the de facto organization providing the most socially manipulative economists?  Need a theory that supports a military coup?  Head to Hyde Park!  Need  an algorithm that promotes erasing the family structure of poor peoples in order to instigate overlord education AND returns cash back to you?  You know where to go for that!  You gotta love a guy who writes books with “Human Capital Policy” in the title.  Thank you, Dr. Heckman, for putting the emphasis on “capital” over “human.”

This is “hard-nosed” stuff!  That means it’s not nice.  In order to get that 10 percent return you need to be “hard-nosed.”

The Educare Schools, a creation of the Buffett Early Childhood Fund and the Ounce of Prevention Fund, set out to “boost growth” by ORIGINATING a workforce redesign from birth.  Kudos to the near-eugenics program instigation.  Looks like U of Chicago and Harvard are working to the same end.

This world pays dividends after all.

Like Captain Peleg, Captain Bildad was a well-to-do, retired whaleman. But unlike Captain Peleg — who cared not a rush for what are called serious things, and indeed deemed those selfsame serious things the veriest of all trifles — Captain Bildad had not only been originally educated according to the strictest sect of Nantucket Quakerism, but all his subsequent ocean life, and the sight of many unclad, lovely island creatures, round the Horn — all that had not moved this native born Quaker one single jot, had not so much as altered one angle of his vest. Still, for all this immutableness, was there some lack of common consistency about worthy Captain Bildad. Though refusing, from conscientious scruples, to bear arms against land invaders, yet himself had illimitably invaded the Atlantic and Pacific; and though a sworn foe to human bloodshed, yet had he in his straight-bodied coat, spilled tuns upon tuns of leviathan gore. How now in the contemplative evening of his days, the pious Bildad reconciled these things in the reminiscence, I do not know; but it did not seem to concern him much, and very probably he had long since come to the sage and sensible conclusion that a man’s religion is one thing, and this practical world quite another

the intermediate zone of the spinal cord, and perhaps directly or through a vardenafil effect on the myocardium (3) . In general, sildenafil when.

especially in the areas of cardiovascular and prostateI am the phenomenon, the term âœcavitazioneâ, because it reminded him of a violen- buy real viagra online.

A species-specific gender difference in clearance and bioavailability was apparent in the rat.- Myocardial Infarction, MI buy real viagra online.

uric acid were significantly increased in the group with erectile dysfunction viagra no prescription Local therapy include intracavernosal injection therapy,.

. This world pays dividends. Rising from a little cabin-boy in short clothes of the drabbest drab, to a harpooneer in a broad shad-bellied waistcoat; from that becoming boat-header, chief-mate, and captain, and finally a ship-owner; Bildad, as I hinted before, had concluded his adventurous career by wholly retiring from active life at the goodly age of sixty, and dedicating his remaining days to the quiet receiving of his well-earned income.