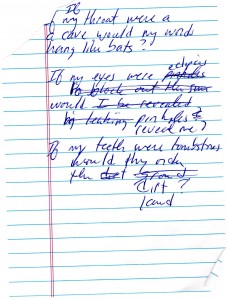 In class today, in a free-writing period I offered this to the gods:

If my throat were a cave would my words hang like bats?
If my eyes were eclipses would pinholes reveal me?
If my teeth were tombstones would they order the dirt?

Recently, my good friend Eric (a teacher in St. Louis) shared something of Eliot’s he liked called “Hysteria” and you can find this in my scratchings today.

We argued a bit over it.  I find it self-consciously psychological.  I know there is a conveyance of real “hysteria” in the man rather than the woman which was a typical diagnosis of the era (1915) when 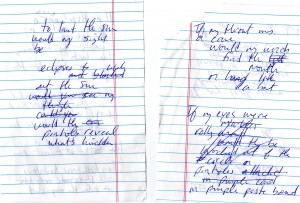 Freud was really just hitting his stride.  Perhaps it is self-revealing.  The poet seems aware of the sexuality of the situation and 100 years on we 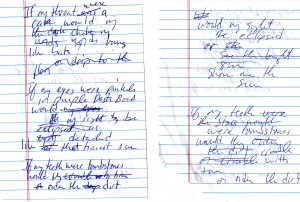 might think it pedestrian in its clandestine nature, but there is something that hints of a deep disturbance in those “unseen muscles” that are as likely vaginal as throat–a commutative figuration.

It is clearly not the giddy awareness of female as object–as an order bunch of jiggling parts to capture a boy’s limbic attention.

But is is highly “written” and confesses it as the poet collects fragments and concentrations “to this end.”

What was subtle about it?

Needless to say, I did not share “Hysteria” with the class.

Common Core Is Authority On Steroids
What Else Was There?
As a Flower Succeeds to Foliage
featured free writing hysteria language poetry sexuality t. s. eliot teaching