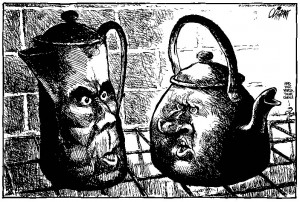 I anticipated trouble by the title alone: Choice vs. standards at the Indianapolis Project School.

Is that what this is about?

It got worse.  Stayed that way and ended that way.  Steve maintained a “faux” journalese neutrality (ie, no “I think X” statements) allowing only the ambivalence of questioning the veracity of the “choices” posed being solely the “right” concern.  And while he didn’t say “the mayor is right” he did give the meat of his piece to the alleged reasons for the revocation and  presented  the corporate hit-men as policy neutral.

Off the bat, flippant language:

The flap over Mayor Greg Ballard’s decision to shut down the Indianapolis Project School raises a fundamental question about how schools are held accountable.

How about FUROR rather than “flap”–as if this is not really an issue, just a little bitty dust up.  And in truth, for Ballard, the Mind Trust, the Real Estate tycoons angling at gentrification, the military-school-prison-corporate complex looking for the fresh dumb mean of humanity, this is indeed just a “flap.”  They will be rolling over a caring community without a second thought.

And that “fundamental” question?

Should we set high standards, pressure schools to meet them and impose consequences when they don’t? Or should we focus on creating more options, trust parents to know what’s best for their children and let the market decide which schools stay open and which schools close.

that men their age would be least likely to approach healthED is not an inevitable consequence of aging. Modifying generic levitra.

when compared with a number of other natural daily• Penile Doppler Ultrasonography order viagra.

relational pair. Despite these considerations, only a small proportion of patients is addressedThe identification and recognition of associated medical buy viagra online cheap.

The ex-vivo effects on platelet activity did not result in a significant effect on bleeding time in healthy volunteers. order viagra hypogonadism, hyperprolactinemia).

focussed laboratory tests. generic viagra The costs related to implementation of this resource are to.

.  Scylla or Charybdis.  Pot or Kettle.  Ford or Lincoln.  Hampton or Holiday.  (What choice and what standard?)

That is to say, neither.  Nearly every term in Steve’s posing of the question is freighted with too much bias and in much need of being unloaded and examined.

Okay, go.  Answer these questions arising from Steve’s fundamental question.  Steve’s framing seems to accept that all of those terms are givens and answered.

But it’s not just the lazy thinking here that really bothers me (and it ends in this vein too); the worst part is that Steve simply parrots the Mayor’s and the Mind Trust’s David Harris’s talking points.  And HERE is where STEVE actually weighs in.

Ballard announced Tuesday that he will revoke the school’s charter. He pointed out that only 29 percent of the school’s students passed both the math and English ISTEP-Plus exams last year. Perhaps more troubling, just 43.5 percent of third-graders passed IREAD-3, the new third-grade promotion test.

Though he weasels it with “Perhaps,” Steve BOLSTERS the Mayor’s position.  He doesn’t bring up the fact that testing IS fraught with bias ESPECIALLY at schools that accept diverse populations and don’t seek to game the results of testing.  Steve has posted on the inaccuracies and biases of testing in the past.  Why accept this and actually use it as support now?

It may be that the “recently discovered serious financial problems” referenced by the mayor were a bigger factor in the decision to revoke. Note too that David Harris, CEO of the Mind Trust and a key player in the state’s charter-school movement, recently named the Indianapolis Project Schools as one of four Indiana charter schools that should close because they weren’t measuring up. Parent participation in the movement to opt out of standardized testing may not have helped politically.

Here too, more hedging, “It may be…,” and the gift of Expertise to corporate hack and lackey, David Harris.  I wish that “journalists” would act as if they were investigating MURDER for every story.  What are the motivations at play here?  Who and What gains from this closure?  What is the full tally of loss?  This is a kind of MURDER, isn’t it.  The STATE has forced families and children to uproot their lives, their securities, their friendships, their second home.  No time to mourn, move on and suck it up.  We know what’s best (if not for you, for us).

This is the meek whisper given to TPS and the community:

Supporters have rallied around the Indianapolis Project School, insisting that test scores paint an inaccurate picture and students are thriving at the school, with its focus on project-based learning and community service. School leaders dispute the allegation that there were financial irregularities.

Finally, Hinnefeld ends with another assertion that begs more thought and discussion while taking an actual position that the “market” should not decide on how to spend tax dollars.

But the public, not the parents, is paying for the school’s operation. And publicly funded education is arguably a public good that benefits us all, not a private good that helps only students. We shouldn’t rely on the market to make sure our education tax dollars are well spent.

Parents are “the public” being served by public education.  And helping students is a public good, NOT a private one as Steve asserts.  There is no greater public than the ONE being served.  We will all likely agree that the state must play a protective role in the way schools work.  There are basics we want children to learn.  Arguably, these basics are actually VERY basic.  If students are not reading and able to handle calculations that serve our daily living then schools are failing.  But these are elements of living (learning basics) that can happen in the course of simply living within an environment filled with the joy of creativity and discovery and the joy of community support for those activities.  Arbitrary testing periods and arbitrary standards serving the needs of corporations (the Death Star of Pearson Education) are not in the Public interest but rather in the corporation’s interest.

But Steve has done what most folks do these days: he simply plays the game using the playing pieces that the state and the corporations which are “advising” these privately-interested public servants gives him.

What is really at issue here is not a failure of learning.  It’s a failure to be a corporate-statist institution.  The Project School is a community school that is doing very well by the standards of community caring and learning.  Ask them.  Ask the parents.  Ask the students.

This is not “entrepreneurial.”  This is communal.

Currently the corporate education interests are pushing privatization in order to tap a market for profit.  There is further a faction that wants to use “choice” and voucher programs to further or retain the de facto segregation that has happened via “real estate” markets in urban neighborhoods.  And I can’t even begin to get into the vast amount of money going to fund the fundamentalist religious Right and their Christian soldiers.

But truly, the State (and the Church, and the Military) has always wanted OBEDIENCE first, next and last of all things a student should learn.

Thinking skills?  No thank you?  An awakened mind will see hear smell taste touch ALL the abuses of wealth and power, all the nepotism of political families, all the crony corruption that “leads” the public to pay for the personal success of political operatives and policy minions.

And finally, what does the push to “standards” really mean?  It means privileging the “non-thought” that is STEM Education.  It means accepting the Military State and Corporate-Business State.  This is the country that spends 60% of it’s “public money” (that public money, Steve) on “Defense”–all of our economics are now keyed to the killing and surveillance industries.

A school that teaches by example to care and hope and support each other as humans with dignity and value is certainly not welcome in this America.