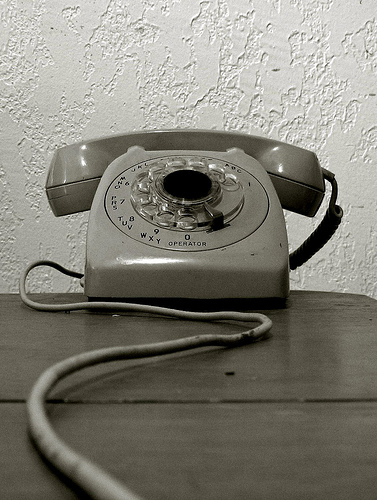 This is a guest post by Sarah, originally published on Hundred Moon.

Yes, when I was a kid not only was Pluto a planet (my very educated mother just served us nine pies), but we had to pick up the phone and dial a string of 7 numbers that we had memorized to reach our friends. We also didn’t have caller ID, and while we had an answering machine, it was only accessible from one physical location. That was half the fun of going on summer vacations, coming home and running to the answering machine to see who had called during the week you were away. That’s right, back then we could survive for a whole week without giving our friends status updates. They may or may not have known we went to the beach, but they had no clue where we were tagged eating breakfast and with whom. And do you remember pay phones? Those used to be legitimate ways of letting people know where you were. Do they even exist anymore?

My stepsons, on the other hand, are in constant communication with their friends via the magically digital tin can known as Skype. Unlike most of their friends, they don’t have cell phones, but they have been able to circumvent being disconnected because they do have computers. Talking through computers? Who da thunk it? Upon hearing their frequent and disjointed chatter with their friends, this got me thinking about the vastly different world in which they communicate. It’s funny to sit here typing this and remember a day when parents would do anything to get their kids off the phone. If there were a day when the kids decided to talk on the phone all day instead of playing/talking on their computers, I think my husband and I would feel a sigh of relief. “Yes, yes! Talk on the phone, please.”

There are a few ways in which I see this modern communication paradigm to thwart what I would consider to be helpful social development, but please understand that at the ripe age of 32 my views are likely seen as outdated, and definitely in the minority. I am in a very small circle of people that don’t own a smart phone, though I by no means eschew electronic communication. I’ll email anyone under the table, and text messages are, well, convenient sometimes. But, isn’t something lost in picking up the phone and waiting for someone to pick up on the other end? Making a phone call as a kid was a big deal because you were calling someone’s house, i.e. you didn’t know who was going to pick up and were met with the social obligation of greeting whoever did pick up the phone. Is there something lost in this contact? Not only did we talk with friends, but frequently in the exchange of handing calls off we chatted with, and became familiar with, other family members. This seems inclusive and good.

Furthermore, if you called someone you had something to say, whether it was just to catch up or to make plans. Either way, a conversation was necessary. No, we didn’t all have to be conversationalists in a way that would have made Jane Austen proud, but we did have to have some preconceived idea of what we were calling about (maybe). Besides this, because we were calling a phone shared by a household, calling too often would have been considered intrusive, especially before the days of call waiting. But even with call waiting, calling our friends necessitated an empathetic awareness of daily schedule; not calling during dinner, not calling too early/late, etc. We do not have these personal boundaries with our electronic communications. I’ll go ahead and lump cell phones into this lack of boundaries. How many people do you see in restaurants constantly looking at their phones? A few weeks ago we went out for Thai food and were seated next to a table of students, all silently bubbled in the world of their individual iPhones. I’m pretty sure they didn’t interact with each other at all. I don’t know how many people extend this habit to their in home dining, but this presupposes some type of communal family dinner activity occurs for most people.

The other issue with communication like Skype is that it usually happens while the kids are doing other things. We’ve been fighting the Minecraft battle for some time now, well, not fighting as in we’re all in there hanging out with Steve, but fighting as in trying to prevent the kids from losing themselves in Minecraft for entire days at a time. I mention this because this is when the bulk of said electronic communication happens, while playing games. Sure, they are mostly conversing over a shared game, and my husband has argued that this in and of itself is a new form of social interaction. At least they’re interacting with their friends, if only virtually? I suppose there is *some* value in this electronic play, but I have also overheard friends being asked to leave our house so that virtual play can resume from afar.

I’m by no means trying to vilify my stepsons, I am simply trying to observe the ways in which they are forming their own understanding of communication. It’s frightening to imagine on of my stepsons writing a blog post in 20 years (will there still be blogs?) and lamenting about the days when they had to click on someone’s name to talk to them. Hell, computers might be outdated by then. Kids will be stumbling around with their Google Goggles and us old farts will be bitching about the days when we had to remember things for ourselves. “When I was a kid we had to remember how to walk home from school using only our brains.”

Oh dear god. Please excuse me while I calm myself by snuggling with books, like actual books with pages I have to turn one by one.

Training in Belief and Reason
The Epic of The Once-ler
Girls Do Science!
communications featured internet minecraft phones skype