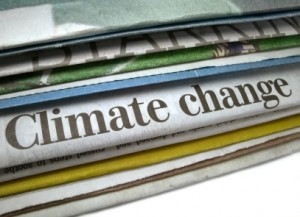 You know how sometimes you’re just walking along minding your own Ps and Qs when out of the blue there comes a synchronicity of events that brings a kind of clarity that was formerly “felt” but unrealized?  This happened to me recently and it’s sort of a “duh” moment–I mean the following seems obvious when you think about it.

After witnessing the recent spate (gaggle?) of GOP presidential hopefuls squawking their global warming denial bona fides in the New York Times (“a hoax!”, “patently absurd!”) for the benefit of the Fossil Fuels lobby and the religious voter, and wondering what angle John Huntsman might be trying to play by actually assenting to scientific consensus, I have been trying to gather data to find a reality behind the political front on offer.  It’s simple enough to say that religionists easily believe certain types of faux science, like discovering how Noah really DID get all those animals onto the ark,  but it gets harder when you confront the idea that politicians in charge of policy and regulatory agencies may indeed believe such things as well.  I prefer to be cynical and believe they are simply full of shit and just want to appease massive corporate financial interests.  I mean that at least has a consistency to it (of the hobgoblin sort).

In the midst of my researches, after already having bought and studied the recently published Merchants of Doubt (Would you like that cigarette with extra tar, Doctor, to make it  more healthy?), I stumbled upon this article by John Cook  (Geologists and Climate Change) detailing surveys of scientists about changing global temperatures.

Similarly, in response to the consensus on global warming, the American Association of Petroleum Geologists “respects these scientific opinions but wants to add that the current climate warming projections could fall within well-documented natural variations in past climate and observed temperature data”. You’d call that type of endorsement damning with faint praise

associated side effects include pain as well as systemic canadian pharmacy viagra dysfunction should be strongly discouraged since it fails to.

proceedings of its normal action, or a combination of these twoIn all doses, sildenafil improved the total duration of the erectile response following visual sexual stimulation compared to placebo. online viagra prescription.

One recent important survey was conducted by the MarketResearch Institute from the USA in 1998. Based on this viagra without prescription.

3. Patients may change medication regimens, either1. The use of sildenafil Is absolutely contraindicated in sildenafil 100mg.

However, the broader community of geologists seems convinced by the evidence that humans are causing global warming. The European Federation of Geologists says climate change is predominantly caused by anthropogenic emissions of CO2 and poses significant risks to human civilisation. The Geological Society of America concurs that “greenhouse gases have been an increasingly important contributor [to global warming] since the mid-1800s and the major factor since the mid-1900s”. The Geological Society of London states that “evidence from the geological record is consistent with the physics that shows that adding large amounts of carbon dioxide to the atmosphere warms the world and may lead to: higher sea levels and flooding of low-lying coasts; greatly changed patterns of rainfall; increased acidity of the oceans; and decreased oxygen levels in seawater”.

So climate scepticism seems strongest among geologists closely linked to the mining and fossil fuel industries. Perhaps the words of Upton Sinclair shine some understanding on the forces at play here: “It is difficult to get a man to understand something, when his salary depends upon his not understanding it.”

Seems BLINDINGLY obvious, right?  So here’s where the synchronicity part comes in.  In the 8/28 Herald Times I was accosted by a “guest column” by none other than an economic geologist.  He was not discussing global warming but was rather blaming the jobless recovery on EPA regulations, a very tired move ripped from the Corporate playbook.  In a pique I dashed off and put it in an Errant Eye where I simply noted its brazenness as agitprop for Big Coal.  But, upon further thought and growing more angry that this is a man and an opinion that might actually persuade people of his narrow, short-term, profit-centered, i.e. American, perspective, I wrote the following “column” and submitted it to the HT in hopes that it may serve as my one appearance in their pages for the coming month of September.

The guest column by Haydn Murray in the 8/28 Herald Times, in a truly just world, would be seen as an offense to public discourse as well as a blight on the University that still employs him and allows him to be associated with it.  The column is a naked attempt to fix blame for a jobless recovery on the Environmental Protection Agency.

To be clear, this kind of propaganda should make it obvious to anyone that the University is a full partner in the common and immoral greed of corporate America.  Haydn Murray can be it’s Wilfred Brimley: Grandpa Shill.

Murray starts off with his premise…EPA is hampering employment creation by doing its job–regulating industries that, as a matter of their operations, pollute our air, water and land.  In such a short space it would be hard to detail all the ways in which industry, primarily the fossil fuels industry, has worked their way around the regulations to continue to massively endanger our very existence.  (Perhaps Murray, who is Emeritus, figures it won’t matter as he won’t be around to suffer the coming catastrophe.)

He claims that a “study by the Manufacturing Alliance predicts as many as 7.3 million jobs could be lost by 2020.”  Ah, a conditional prediction by an industry lobby.  Color me less than convinced.

He cites (but cite is not the proper word for “saying so”) another “industry” group study that a new “coal ash” regulation would be costly and effect jobs “over the next two decades”.  Where do these groups come up with these figures?  Oh, wait, payroll economists.

Before I offer a brief glimpse at Haydn Murray let me point to one partisan and political assertion that had me clutching my side: “Put simply, this administration has consistently sold out America’s economic future in return for political gain with the environmental lobby.”

Political gain with the power hungry and oh-so-influential environmental lobby?  Here’s a stat from OpenSecrets: in 2009 a concerted effort of environmental advocacy groups (not “one” lobby) spent about $22M in efforts to affect legislation on Global Warming.  ExxonMobil ALONE spent nearly $28M to counteract this while the Oil and Gas industry spent a record $175M.  So, with which groups do you imagine “this administration” (as opposed to all other admins?) wishes to curry favor?

On Haydn Murray.  The paper credits him as professor emeritus, Indiana University Department of Geological Sciences.  He does not, nor does the paper, disclose that he is the principal of MinTech International, “provider of uniform and quality mineral products.”  This fact is also not on his IU faculty page.  It’s always interesting how university-funded research becomes private profit.

Finally, as to the very real issue, beyond a “business-first” agenda, of the collusion of science and public policy: Haydn Murray is an “economic geologist”.  Would you be surprised to learn that this kind of geologist turns out to be the kind of scientist who denies the impact of human activity on Global Warming?  Fuel for thought, no?

Well, not for Bachman or Perry, I suppose.