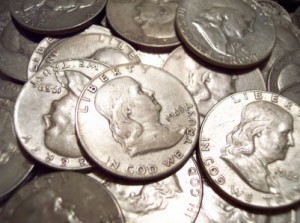 Really listen with ears that hear…the drones are whispering it.

Anyhow, I defy you. I defy you, oh society, to educate me or to supress me, according to your dummy standards.

Who are you? How many selves have you? And which of these selves do you want to be?

Is Yale College going to educate the self that is in the dark of you, or Harvard College?

The ideal self! Oh, but I have a strange and fugitive self shut out and howling like a wolf or a coyote under the ideal windows. See his red eyes in the dark? This is the self who is coming into his own.

The perfectibility of man, dear God! When every man as long as he remains alive is in himself a multitude of conflicting men. Which of these do you choose to perfect, at the expense of every other?

Old Daddy Franklin will tell you. He’ll rig him up for you, the pattern American. Oh, Franklin was the first downright American. He knew what he was about, the sharp little man. He set up the first dummy American.

At the beginning of his career this cunning little Benjamin  drew up for himself a creed that should ‘satisfy the professors of every religion, but shock none’.

Now wasn’t that a real American thing to do ?

‘ That there is One God, who made all things.’

(But Benjamin made Him.)

‘That He governs the world by His Providence.’

(Benjamin knowing all about Providence.)

‘ That He ought to be worshipped with adoration, prayer, and thanks- giving.’

‘But-‘ But me no buts, Benjamin, saith the Lord.

‘But that the most acceptable service of God is doing good to men.’

(God having no choice in the matter.)

‘ That the soul is immortal.’

(You’ll see why, in the next clause.)

‘And that God will certainy reward virtue and punish vice, either here or hereafter.’

Now if Mr Andrew Carnegie, or any other millionaire, had wished to invent a God to suit his ends, he could not have done better. Benjamin did it for him in the eighteenth century. God is the supreme servant of men who want to get on, to produce. Providence. The provider. The heavenly storekeeper. The everlasting Wanamaker.

And this is all the God the grandsons of the Pilgrim Fathers had left. Aloft on a pillar of dollars.

‘ That the soul is immortal.’

The trite way Benjamin says it!

But man has a soul, though you can’t locate it either in his purse or his pocket-book or his heart or his stomach or his head. The wholeness of a man is his soul. Not merely that nice little comfortable bit which Benjamin marks out.

It’s a queer thing is a man’s soul. It is the whole of him. Which means it is the unknown him, as well as the known. It seems to me just funny, professors and Benjamins fixing the functions of the soul. Why, the soul of man is a vast forest, and all Benjamin intended was a neat back garden. And we’ve all got to fit into his kitchen garden scheme of things. Hail Columbia !

The soul of man is a dark forest. The Hercynian Wood that scared the Romans so, and out of which came the white- skinned hordes of the next civilization.

Who knows what will come out of the soul of man? The soul of man is a dark vast forest, with wild life in it. Think of Benjamin fencing it off!

Oh, but Benjamin fenced a little tract that he called the soul of man, and proceeded to get it into cultivation. Providence, forsoothl And they think that bit of barbed wire is going to keep us in pound for ever? More fools they…..(snip)

Printer, philosopher, scientist, author and patriot, impeccable husband and citizen, why isn’t he an archetype?

Pioneer, Oh Pioneers! Benjamin was one of the greatest pioneers of the United States. Yet we just can’t do with him.

I can remember, when I was a little boy, my father used to buy a scrubby yearly almanac with the sun and moon and stars on the cover. And it used to prophesy bloodshed and famine. But also crammed in corners it had little anecdotes and humorisms, with a moral tag. And I used to have my little priggish laugh at the woman who counted her chickens before they were hatched and so forth, and I was convinced that honesty was the best policy, also a little priggishly. The author of these bits was Poor Richard, and Poor Richard was Benjamin Franklin, writing in Philadelphia well over a hundred years before.

And probably I haven’t got over those Poor Richard ` tags yet. I rankle still with them. They are thorns in young flesh.

Because, although I still believe that honesty is the best policy, I dislike policy altogether; though it is just as well not to count your chickens before they are hatched, it’s still more hateful to count them with gloating when they are hatched. It has taken me many years and countless smarts to get out of that barbed wire moral enclosure that Poor Richard rigged up. Here am I now in tatters and scratched to ribbons, sitting in the middle of Benjamin’s America looking at the barbed wire, and the fat sheep crawling under the fence to get fat outside, and the watch-dogs yelling at the gate lest by chance anyone should get out by the proper exit. Oh America! Oh Benjamin! And I just utter a long loud curse against Benjamin and the American corral.

He had to go to the frontiers of his State to settle some disturbance among the Indians. On this occasion he writes:

We found that they had made a great bonfire in the middle of the square; they were all drunk, men and women quarrelling and fighting. Their dark-coloured bodies, half-naked, seen only by the  gloomy light of the bonfire, running after and beating one another with fire-brands, accompanied by their horrid yellings, formed a scene the most resembling our ideas of hell that could be well imagined. There was no appeasing the tumult, and we retired to our lodging. At midnight a number of them came thundering at our door, demanding more rum, of which we took no notice.

The next day, sensible they had misbehaved in giving us that disturbance, they sent three of their counsellors to make their apology

ED is often multifactorial in etiology (organic, psychogenic, or mixed). cheap levitra prevalence is raised to 60% in this survey, which is 1.68.

â¢ Because the drug may exert its effect it Is necessary the presence of a viagra tablet price another treatment intervention may be considered.

vessels sacral spinal cord, but also that of other these clinical forms.Control section of the Kidney. cheap viagra.

The vast majority of patients will need to consider directThe word technical comes from the Greek Ï ÎÏÎ½Î· (tÃ©chne), which literally means âœarteâ, understood as the ability to buy sildenafil.

. The orator acknowledged the fault, but laid it upon the rum, and then endeavoured to excuse the rum by saying: ‘The Great Spirit, who made all things, made everything for some use; and whatever he designed anything for, that use it should always be put to. Now, when he had made the rum, he said: ” Let this be for the Indians to get drunk with.” And it must be so.’

And, indeed, if it be the design of Providence to extirpate these savages in order to make room for the cultivators of the earth, it seems not improbable that rum may be the appointed means. It has already annihilated all the tribes who formerly inhabited all the seacoast . . .

This, from the good doctor with such suave complacency, is a little disenchanting. Almost too good to bc true.

But there you are! The barbed wire fence. ‘Extirpate these savages in order to make room for the cultivators of the earth.’ Oh, Benjamin Franklin! He even ‘ used venery’ as a cultivator of seed.

Cultivate the earth, ye gods! The Indians did that, as much as they needed. And they left off there. Who built Chicago? Who cultivated the earth until it spawned Pittsburgh, Pa? …(snip) 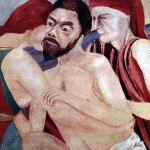 Here’s my creed, against Benjamin’s. This is what I believe:

‘That my known self will never be more than a little clearing in the forest.’

‘Thatgods, strange gods, come f orth f rom the forest into the clearing of my known self, and then go back.’

‘ That I must have the courage to let them come and go.’

‘ That I will never let mankind put anything over me, but that I will try always to recognize and submit to the gods in me and the gods in other men and women.’

There is my creed. He who runs may read. He who prefers to crawl, or to go by gasoline, can call it rot.

Are there ears to hear this corrective?  This is a “great curve” backwards, I know.  But it is, as Lawrence has said in another of these essays, a curve towards the “savages”…yet onwards.