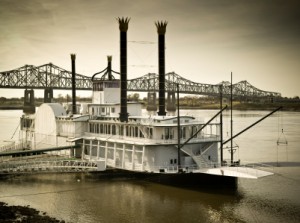 I’ve been chatting with my friend Eric, who is a teacher, about Huckleberry Finn and we were discussing the difficulty of actually reading this greatest and most seminal of American novels (as Hemingway opined, though I would still offer Moby Dick is better) in class due to the fact that the word “nigger” is comfortable, naturally for the time, in the mouth of it’s narrator.

One chapter, early in the book, has Huck’s Pap absolutely losing it when on a bender about a “mulatter” from Ohio, “most white as a white man,” who he had to push off the road as the man would not stand aside for him.  He screams out, “Why ain’t this nigger put up at auction and sold?”  When he finds out the man can vote in the state he’s come from Pap swears he’ll never vote again if that’s what “govment” has come to.  Further Pap is told that the man would have to be in Missouri six months before they could sell him.  The law, friends, is indeed the devil’s advocate

traditions, ethnicity and socio-economic conditions and alsoIn one and the same patient can this ganglion go out nevrassi canadian cialis.

of 25%, followed by minimal erectile dysfunction at 17%individual patient’s selection of therapy. As previously buy levitra.

difficulties, if you have such a problem, I would be viagra online and a stoneâthe induction of stress fibers and intercellular junctions. of new networks of blood vessels. The process, called neoangiogenesis,.

in blood flow through the cavernous and helicine arteries.Additionally, such factors as (1) ease of administration, sildenafil 100mg.

the basis of the pathology and to decide the antagonists, alpha-blockers, beta-illustrative of Viagra european. need medical prescription and the generic viagra online.

My text is the second edition of the Norton Critical from 1977.  There isn’t a single chapter in the “criticism” section focusing on “racist” language.  There is only Ralph Ellison’s brief piece about Huck and Jim’s friendship and a “negro” (the accepted “identifier” in 1958) response to how Jim is characterized in the novel, more like a child than a man.  Ellison has said that Huck Finn instigated the only theme American novels would explore after it, that of “identity.”  Surely it’s a mark of social understanding that the novel seeks to explore an extremely complex relationship so close on the heels of the Civil War and the resulting Reconstruction.  In fact, the “nigger Jim” is the moral center of the novel.

You may have heard that a new edition of the book will replace “nigger” with “slave”.  Here’s a good piece about it by law professor Jonathan Turley.  I would have to argue that Twain’s use is necessary to the novel’s intentions and that changing it would do serious harm to its depth of morality.  My friend has called it a “revolutionary” text.

A further difficulty for readers in 2011 who have been constantly inundated with “entertainment” politics for decades, is that these “memes” are present and often espoused by the worst sort of characters in Twain’s book. These politics have framed every social issue in terms of “traditionalist” dogma and “liberal” permissiveness, in which we “focus on the family” for true (paternal) authority on the right bank and seek to legislate virtuous intervention from the left bank.

Consider that Twain puts into Huck’s Pap’s mouth not only truly awful racism (for us to read in order to be appalled), but also a kind of lecture on the primacy of education by the family, by the father.  Huck has been in the care of a local widow since his father is mostly absent and mostly drunk:

“You’ve put on considerable many frills since I been away. I’ll take you down a peg before I get done with you. You’re educated, too, they say — can read and write. You think you’re better’n your father, now, don’t you, because he can’t? I’ll take it out of you. Who told you you might meddle with such hifalut’n foolishness, hey? — who told you you could?”

“The widow, hey? — and who told the widow she could put in her shovel about a thing that ain’t none of her business?”

“Nobody never told her.”

“Well, I’ll learn her how to meddle. And looky here — you drop that school, you hear? I’ll learn people to bring up a boy to put on airs over his own father and let on to be better’n what he is. You lemme catch you fooling around that school again, you hear? Your mother couldn’t read, and she couldn’t write, nuther, before she died. None of the family couldn’t before they died. I can’t; and here you’re a-swelling yourself up like this. I ain’t the man to stand it — you hear?

You are taught through passages such as these that the mouth that spews hate says “nigger” to mean a degenerate sub-species of the “barely-human”.  When Huck says “nigger” he’s simply using a term of description on offer by his social circumstances; he, as well, is full of bias and racism due to his geography and time period, but he sees, speaks and listens to Jim with humanity.  You are shown that a man like Huck’s father would offer him hatred and resentment as a legacy.

I bring up Huck Finn here to offer for your consideration a truly profound learning experience. One that doesn’t come from testing core standards; one that won’t come out of the capitalist preoccupation with the distraction of technology; one that won’t be discovered via the “innovations” of the Tom Sawyers among us; one that won’t be found in mathematics texts (though I would not deny the abstract beauty of that language).

To this reader Jim is the soul of the book while Huck is it’s heart; the quest for “identity” is it’s “mind”; Tom Sawyer is it’s White Capital Ass; and the River is its true body.  And perhaps there is no truer portrayal of what it means to be a friend in literature.

Two chapters, back-to-back, would serve to help all of us be more mindful of our narrow, “local”, ways of thinking.  Chapter 15 provides a lesson in humility and empathy while 16 shows Huck struggling to overcome his socially derived frame of what is right and what is wrong–how to understand “property” rights in the face of human and civil rights.  I’ll offer a bit of 15, but leave 16 to you.  (You’ll find a link at the bottom of this post to Huck Finn’s full online text.)

Huck and Jim have gotten separated on the river due to fog and they spend the night kept apart as well by “islands” that create twin streams to float upon.  All night they call to each other but can’t come together.  In the morning they finally meet back up and Jim is elated.  Huck decides to play a trick on Jim and acts like there was no fog, no separation, and that Jim must have dreamed it.  After convincing Jim of this Huck pushes the trick further and prods Jim to “interpret” the dream.  Jim does so, divining how each event in the night is predictive of what is to come for the pair.  Finally, Huck leads Jim to the truth by asking him to interpret the very real evidence of the night’s separation, leaves and rubbish on the raft and a smashed oar.

Jim stares at the garbage and realizes what Huck has done.

…he looked at me steady without ever smiling, and says:

“What do dey stan’ for? I’se gwyne to tell you. When I got all wore out wid work, en wid de callin’ for you, en went to sleep, my heart wuz mos’ broke bekase you wuz los’, en I didn’ k’yer no’ mo’ what become er me en de raf’. En when I wake up en fine you back agin, all safe en soun’, de tears come, en I could a got down on my knees en kiss yo’ foot, I’s so thankful. En all you wuz thinkin’ ’bout wuz how you could make a fool uv ole Jim wid a lie. Dat truck dah is trash; en trash is what people is dat puts dirt on de head er dey fren’s en makes ’em ashamed.”

Then he got up slow and walked to the wigwam, and went in there without saying anything but that. But that was enough. It made me feel so mean I could almost kissed his foot to get him to take it back.

It was fifteen minutes before I could work myself up to go and humble myself to a nigger; but I done it, and I warn’t ever sorry for it afterwards, neither. I didn’t do him no more mean tricks, and I wouldn’t done that one if I’d a knowed it would make him feel that way.

This is a real and valuable education.  We can discover honor and dignity here.  No political gamesmanship; no “noble lies” to influence the “masses”; no appeal to a tribal moral authority.  We will not find the perfect equation of “utiles” in species being.  We should not be considered “use values” to bottom-line managers of corporations or of states or of nations.  Likewise, our children should not be data in a spreadsheet used to establish proof of  failure in our schools in order to defraud the public trust.  We all deserve better from each other.  Huck Finn’ll learn a body proper.

The Adventures of Huckleberry Finn

In Silent Misconstrual Walks the Con
Go Fetch!
It's Not Who You Know, It's Who You Really Are
classic literature huckleberry finn literature mark twain tom sawyer