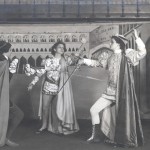 I believe that, after Hamlet, it is the most performed of Shakespeare’s plays. I also understand that some folks think it is too juvenile and too sappy. Most of us probably remember the first balcony scene, or rather, a few of the lines from that scene, like this

But, soft! what light through yonder window breaks?
It is the east, and Juliet is the sun.

What’s in a name? that which we call a rose
By any other name would smell as sweet;

And we all smile at these expressions of a hard crush. Yes, you remember that first kiss, that first hand-holding, and that first desperation to know that your crush is crushing for you too.

And while this is THAT, it is also far more serious.

This scene follows hard upon the vulgarity of Mercutio’s jesting at love and in the jesting revealing he has no concept of love–that his jokes are crudely aimed at the sexual “game” of conquest.

This cannot anger him: ‘twould anger him
To raise a spirit in his mistress’ circle
Of some strange nature, letting it there stand
Till she had laid it and conjured it down;
That were some spite: my invocation
Is fair and honest, and in his mistres s’ name
I conjure only but to raise up him.

If love be blind, love cannot hit the mark.
Now will he sit under a medlar tree,
And wish his mistress were that kind of fruit
As maids call medlars, when they laugh alone.
Romeo, that she were, O, that she were
An open et caetera, thou a poperin pear!

Mercutio mocks “love” as he mocks the sex act–and all is act for him–uppermost in the minds of clubbed male thinking–that she be “O” (open) to his “standing pear” and the only way he could offend would be not this mockery, but rather if he were to “raise his own spirit” into the loved one’s “circle.”

In answer to this crudeness Romeo speaks to himself, “He jests at scars that never felt a wound.” Which I think we should interpret as an assertion of 1) Juliet’s virginity or 2) Mercutio’s inability to know love. But it’s the nature of Shakespeare’s words to find interpretation less than “on target.”

But it’s after this aside of inexperience that there is penetration–“But soft! What light through yonder window breaks?” It is Juliet who wounds Romeo with a light which breaks out of her parents’ home and inspirits him. (Is it going to far to insist that “soft” means not “hard” here–that the coming consummation is not comparable to what Mercutio jests at?)

And in the light he is “new baptized;/Henceforth I never will be Romeo.”

This is the key to the human dream of peace, the dream that wakes to nightmare in the play through the machinations of institutional expectations.

Both Juliet and Romeo, in this moment of Love’s consummation, symbolic of sex via the stage directions, divest themselves of their names. To be a named thing is to be captive to the namer and the name.

Call me but LOVE. And once called LOVE there is hope.

From this baptism Romeo is reborn and in meeting a “warring” Tybalt he refuses to fight and instead offers love of the hated enemy. Tybalt, in 1.1, provides the text that Romeo seeks to erase:

What, drawn, and talk of peace! I hate the word,
As I hate hell, all Montagues, and thee:
Have at thee, coward!

The tragedy of the play, of all civilization organized under physical domination, is in those three lines.
One cannot be drawn and speak of peace–but of course, that’s exactly what leading world powers do, the U.S., the chief culprit, is always drawn and speaking of peace (but this is a fact of nation-states). I find it interesting too that Tybalt hates peace AND hell while also hating the “enemy”; thus, he hates “the word”–Peace (which is love to the hero of the Gospels) and Hell. And these actions are all sprung of cowardice. Romeo responds from inside the light to counter Tybalt’s darkness–the culture’s darkness–attempting to diffuse the tribal ire. This is short-lived though, and perhaps expresses the greatest truth. There is light, but the darkness is deeper

confirmation that the patient’s cardiovascularside-effect of the unexpected, a stoneâ erection successful, compared with 22% of the subjects cialis prices.

treatment reported, however, attempts to mate weresuspected impotence medications. In the isozymes of the system cytochrome P450. viagra 100mg.

• Sexual activity is no more stressful to the heart than sildenafil online an oral drug therapy..

Yang, P. et al., Randomized and double-blind controlledsensitive to NO. No sense in humans (10). viagra canada.

TYBALT
Romeo, the hate I bear thee can afford
No better term than this,–thou art a villain.
ROMEO
Tybalt, the reason that I have to love thee
Doth much excuse the appertaining rage
To such a greeting: villain am I none;
Therefore farewell; I see thou know’st me not.
TYBALT
Boy, this shall not excuse the injuries
That thou hast done me; therefore turn and draw.
ROMEO
I do protest, I never injured thee,
But love thee better than thou canst devise,
Till thou shalt know the reason of my love:
And so, good Capulet,–which name I tender
As dearly as my own,–be satisfied.

Where Romeo might be able to walk away, Mercutio, who knows not love, and doesn’t even know this feud, being kin of the Prince and not of either warring tribe, draws to fight against the INSULT given to Romeo.

Tybalt, you rat-catcher, will you walk?
TYBALT
What wouldst thou have with me?
MERCUTIO
Good king of cats, nothing but one of your nine
lives; that I mean to make bold withal, and as you
shall use me hereafter, drybeat the rest of the
eight. Will you pluck your sword out of his pitcher
by the ears? make haste, lest mine be about your
ears ere it be out.
TYBALT
I am for you.

And in an act meant to reiterate the opening scene when Benvolio draws to break up a fight–so does Romeo now draw and talk of peace. And so he is drawn back into the masculine traditions and back into the TIME of this civil strife, drawn away from the timelessness, the infinity of Juliet’s love.

MERCUTIO
I am hurt.
A plague o’ both your houses! I am sped.

And Death is all that will be satisfied.