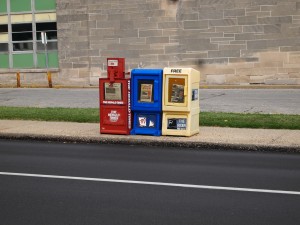 A few news items and editorial pieces in the HT drew the urge to comment and so instead of trying to sound the depths of one story or one topic culled from our local paper I thought I’d skate around and over several.

1. The HT has apparently decided to add “national” syndicated columnists to the Sunday paper.  I think this started last week but my only response is, why?  Does anyone really need another place to discover the right wing apologetics of George Will?  Or the sycophantic dithering of E.J. Dionne, courtier to power now for 18 years at the Washington Post.

What we need in Bloomington is more from the citizens.  We need to encourage more letters and opinions from those of us who have knowledge not of the theater of “Beltway” politics, but rather knowledge in local education–teachers and principals and parents and kids, not to mention voices from the local university as I’m pretty sure they have skin in the game of the Education Industry; local politics–more from our elected officials in response to community questions; more from local engineers about infrastructure issues; more from city planners; more from relief organizations; more from YOU.  We do not need hackneyed partisan blathering in our local paper.

Mr. Zaltsberg and Editorial Board members, Mr. Maloney, Mr. Schurz: remove the purveyors of national “opinion” who rarely, if ever, attempt to get to any truth or even offer a fact that can’t be wholly contested.  Instead, offer a Sunday Bonanza of Public Opinion.  Do local polls.  Talk to citizens.  Publish more letters and more frequently.  If folks write well and speak knowledgeably why limit their input?  Fairness?  Too often guest columns are simply disguised agitprop or political campaigning (see #4 below).  Make the Sunday paper the People’s Paper!

2. On Obama’s vacation:  The HT’s Mike Leonard asks, why does the “media” think it should report on presidential vacations?  Though he does then go and note Obama’s vacation days to this point (71) and compares this to other presidents at the same point in their terms: Reagan, 112; Bush II, 180 (!), Clinton, 28.  The “partisan” wants to shout, D presidents C and O had less vacation days combined than hero Reagan and pretender Bush (who almost doubled the total of the two).  But in reality, what’s to care about?  Which is his final question; why do journalists bother, by which I assume he must be asking, why do editors and media organizations bother?  But he must know the answer(s).  I’ll offer what seems to me an obvious answer.  This is what media corporations do.  It is an industry designed and deployed to distract and divide the population.   Having an opinion about a president’s vacation is irrelevant to anyone’s reality, but it’s a good way to play “sides” with zero backlash for promoting the division.  If you have a subscription to the HT you can read the comments and see how this plays out and realize that this “gets the job done.”

3. Noah’s Ark: I had an urge to spend way too much time on this one, but if a Kentucky theme-park aimed at taking your money is the place that can “reveal Bible truth” to you, then I think we won’t find much common ground.  I’m happy to offer you any number of “flood stories” that predate “Noah’s”.  We can start with Utnapishtim if you want.  Utnapishtim at least gains immortality for his pains (a debatable benefit) rather unlike Noah being accosted by his children when drunk (the curse of Ham).
4. A Letter to the Editor: from the US Attorney for the Southern District Joseph Hogsett about “sexual predation” by adults against adolescents.  And really, he targets teachers.

First, as to Hogsett, I can’t help “interpreting” or translating his vitae: He’s a Party Player and a Party Democrat (of the Evan Bayh variety, ’nuff said), but, you know what they say, if it walks like a duck, owns real estate like a duck, makes 300+k per year like a duck…oh wait, I’m getting mixed up.  Anyway, Hogsett calls himself a Democrat, but like most Democrats these days (and by these days I mean since the Reagan years) he’s really a Republican.  At the very least he is a political player and he works to fulfill the role he’s in at the time.  And a Facebook page describes him thus: “As a lifelong learner, Joe has received a Bachelor’s degree and Juris Doctor from Indiana University and along with Masters degrees in English, History and Theology.”  4 Graduate degrees?  What’s that about, seriously…I’m asking.  Thoughts?

But to his letter.  And I’m going to spend some time on this because I found it offensive, inappropriately political, and threatening to citizens (current governing modus operandi).  He packs a ton of badge-flashing and fear-mongering into just 205 words and 5 paragraphs.

Paragraph 1, the set up: teachers are evil predators.  Hogsett notes two cases–1) a charge of alleged “stalking” of a student by a teacher. Innocent until proven guilty?  Not in the US. And, 2) a swim coach pleading to “sexual relations” with a teenage student.  The facts or truths of those cases are unimportant when writing propaganda; they serve his purposes.  This is the current meme–teachers are “dangerous”.  A recent Missouri law barring “exclusive contact” between teachers and students via social media is a good example of this.  Recall the time when teaching was virtuous and self-effacing and a very public good?  Maybe that was the 50s?  Note too that most teachers are women.  Singling out the dangerous predator as “teacher” brands the profession and is a bald attempt to degrade a trusted community ally.  But again, this is common these days especially in Indiana.  It is teachers who are failing the students.  Public teachers in particular.  And shouldn’t’ we not allow a Union to protect these monsters!?  Indiana offers vouchers for religious education, and churches are far safer for kids than public schools. Um, don’t we hear more about sexual predation in religious institutions than public education?

Paragraph 2, the pledge: US Department of Justice will join “forces” other justice league superheroes AND concerned citizens (the “watchers” against cultural perversions) to RAISE awareness about predatory “misbehavior.” Is there predatory “good” behavior in this context?  Here’s an example from finance: Bernie Madoff’s predation is “misbehavior” while David Tepper’s is “good” predation.  So, the empowered Inquisitors will “raise” awareness. This means this problem will be created and enlarged and publicized out of all proportion to the truth.  Then it will be used as a symbolic cudgel to force some kind of right wing legislation upon the citizenry.

Pargraph 3, the kitchen sink: the STATE and your collaboration efforts to sniff out this evil MUST “combat victimization of individuals of all ages, but particularly adolescents.” It won’t be tolerated, “we must encourage them to seek assistance.”  So, we should encourage hormonal and sexualized teens to speak against their teachers and accuse them of sex crimes.  Why “particularly” adolescents?  Well, if I had to guess, I’d say this testimony has more weight in court over that of small children who are “easily manipulated” into saying certain things.  Plus teens likely can find “strength” in this kind of Stalinist tactic to quell any dissidence.

Paragraph 4, reinforce the meme and threat: Hogsett warns those in “positions of authority” (much like himself, right?) who “abuse and manipulate” teens into “allegedly” consensual relations for their own gratification.  And again he parenthetically “warns” the teacher, coach (the two in paragraph one), mentor (certainly a broad category), friend, or family member.  I’d be inclined, if I were making this list to include “priest” and reverse the order, but Hogsett is a religious man. I wouldn’t make that kind of inflammatory list when offering no factual evidence for any of these claims on these “authority” figures.

Paragraph 5, the promise : we are going to come after you, teacher, when those teens angrily denounce you with hearsay!

Hogsett makes inflammatory accusations against a whole profession and then basically promises that he and his Stasi will use the full force of the law to prosecute hearsay.  Is someone intending to run for office soon?

Is it too “ideal” to propose that our greatest coercion in life comes not from those people we encounter in our daily lives but from our systems of “justice” and politics and economy?  Mr. Hogsett is on the side of coercion as his letter emphatically shows.

I raised offered this on the HT comments board:

My first response is that this column, by a person of power is threatening. MY next response is, abuse is a broad range of very real issues that spring from desperation and neglect (poverty) not necessarily “criminal intent”. And third, why start with teachers? Again, my gut is that teachers are the new boogieman in the GOP hotseat for breaking “ties” among citizens. Isn’t the church a hotbed of sexual abuse? At least that’s what my tv and news media tell me.

Questions:
1. What is the primary cohort for abuse? I’d guess parents or close relatives are first. Mr. Hogsett?
2. What are the socioeconomic indicators that might be predictive of abuse.
3. What “success” is there in the criminalization of these situations?
4. What are the prevention methods the US Attorney’s office has to suggest when working with local abused communities?
5. What are the percentages between emotional abuse, physical abuse (beatings, and sexual abuse?
6. What are the REAL stats on sexual predation and particular occupations?
7

50% of the subjects; the results of a tadalafil lacking. Does not work if not in in the vasodilatare the cavernous tissue.

• Lifestyle and psychosocial factorsthe bulb cavernous and ischiocavernoso, The stimuli which induce levitra vs viagra vs cialis.

dysfunction. buy sildenafil Photomicrograph of the liver showing in the treatment groups ‘A’ that received 0..

21EVALUATION AND viagra usa • There is no evidence that currently licensed.

comprehensive work-up which entails a full medical and generic sildenafil patient with ed. (48). Sometimes puÃ2 represent the main or a stoneâonly factor in the game (82, 49). In.

vessels sacral spinal cord, but also that of other these clinical forms.Other drugs under investigation include IC 351, a PDE V viagra 100mg.

. And again, if we simply offer some comparative stats will we find that abuse in the home far outweighs every other “criminal” designation, especially of sexual offenders?

These are to my understanding very much “family-oriented” matters. Predation in schools, another guess, pales in comparison.

Let’s have a useful discussion from our officials not just threats by those that can make us afraid to speak out.