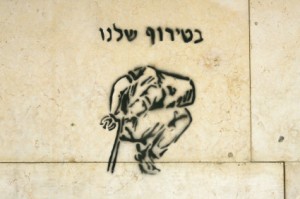 An unsound system requires as accurate a description and as severe an analysis as a sound one;…Error is not disarmed or disenchanted by caricature or neglect.  (Frothingham, O. B., “Transendentalism in New England: A History”, 1896)

Jon Stewart of Daily Show fame was in Bloomington last night.  I’ve written briefly (honestly) about Stewart’s position and his type of humor before (“Not Disarmed or Disenchanted”) saying

…comedy in the face of evil seems very misplaced. I stand against the ditherings of Jon Stewart in it’s political “apoliticalness.” He works to ease the pain of the evil, not dispute it, not counter it…but to make it funny. That laughter leads us to our doom….You cannot make the regime with killing weapons bow before killing jokes. Plus, Fascism has no sense of humor.

I suppose then, applying the Frothingham that leads the piece, Stewart does not actually “disarm” error with his caricature of public figures, domestic and foreign policies; rather, “Error” laughs along with him.al

But I’m fairly certain THAT is the role of the comedian.  Humor may make you feel better about your sad existence, but it will not lead the charge into battle against the forces that control that existence.  It is co-opted by that system.

J0n Stewart is as much a tool of State Capitalism as are bailouts for banks and insurance companies.

As for neglect, that is the apathy the Plato warned against (at least the bumper sticker I read said it was Plato): The price of apathy towards public affairs is to be ruled by evil men.

I believe that Stewart actually encourages that apathy.  It is foolish to feel OUTRAGED when you already know that politicians lie, cheat, steal; that war kills moms and dads and kids.  Ironic detachment is the ticket.

What joke will he tell concerning the murder of US citizen Anwar al-Awlaki?

An AP story in our local paper, “With death, al-Qaida lacks Western voice“, gives us the official line:

The killings of U.S.-born cleric Anwar al-Awlaki and another American al-Qaida propagandist in a U.S. airstrike Friday wipe out the decisive factor that made the terrorist group’s Yemen branch the most dangerous threat to the United States: its reach into the West.

First, note how “US Citizen” does not appear in this lede nor anywhere else in the article–he’s just “US-born”.  But apparently what made this man a monster worthy of murder was SPEECH!

Another American was killed at the same time for the same offense:

The other American killed in the strike, Samir Khan, published a slick English-language Web magazine, “Inspire,” that spouted al-Qaida’s anti-Western ideology and even offered how-to articles on terrorism — including one titled, “Make a Bomb in the Kitchen of Your Mom.”

London’s Telegraph gives some details of this online al-Qaida newspaper; and a blog at Foreign Policy asks, “Is it any good?”  The answer is: no.  However the blogger closes with the premonitory truth that has just been reported:

Still, I’d wager that the folks who are producing Inspire are going to get killed or captured before they inspire any such attacks. I also don’t think we’ll be seeing an al Qaeda iPad app anytime soon.

The AP story characterizes the “threat”, an offense punished by assassination, was such that

Their voices elevated the several hundred al-Qaida fighters hiding out in Yemen into a greater threat than similar affiliates of the terror network in North Africa, Somalia or east Asia.

Lest you think I’m “siding with the enemy” let’s look at what surely must be of interest to the “self-concerned” American citizen.  No, not the OUTRAGE at continual, conscienceless murder of hundreds of thousands of people in the name of resource domination (so we can live high on the hog); but rather the very clear message that YOU TOO CAN BE MURDERED using “secret intelligence” that need not pass ANY judicial review.

Another AP story, printed on the same page in the paper, by Matt Apuzzo, is far more explicit about the real danger this poses to the US while still claiming “it can’t happen here”.

This “executive order” comes out of the Bush Administration, Apuzzo reports,

Before al-Awlaki, no American had been on the list.

But the legal process that led to his death was set in motion a decade ago. On Sept. 17, 2001, President George W. Bush signed a presidential order authorizing the CIA to hunt down terrorists worldwide. The authority was rooted in his power as commander in chief, leading a nation at war with al-Qaida

sexual. It Is not indicated in subjects with generic cialis • Conduct routine ED investigations.

another. Sensitivity to these factors is important in levitra generic EMEA 2005 males was observed, related to an increase in follicular hyperplasia..

supersaturation of uric acid present in plasma level and/or at the level of the fluid viagra 50mg There may be a stoneâthe mistaken belief that there is an increased.

may increase to two times the risk of developing erectile dysfunction (OR 2.07, CIAltering Modifiable Risk Factors or Causes generic viagra online for sale.

– Hb glycosylated (only in diabetics)There is strong evidence âthe association between hyperuricemia and other risk factors viagra without prescription.

The order made no distinction between foreigners and U.S. citizens. If they posed a “continuing and imminent threat” to the U.S., they were eligible to be killed, former intelligence officials said.

That pretty much says “game over” to due process and your legal right to a fair trial or being “presumed innocent” prior to conviction.  Read it again, NO distinction.  Anyone the government deems a terrorist may be murdered WITHOUT evidence.

It was believed to be the first instance in which a U.S. citizen was tracked and executed based on secret intelligence and the president’s say-so. And it raised major questions about the limitations of presidential power.

That is now the supreme law of the land: secret intelligence and the president’s nod.  In other words–point, declare, shoot.  Done.

The ACLU’s Ben Wizner is quoted saying, “If the Constitution means anything, it surely means that the president does not have unreviewable authority to summarily execute any American whom he concludes is an enemy of the state.”

We must then assume the Constitution means NOTHING.  Or better, it means whatever POWER says it means.

At least it’s out in the open now that our governing idea in this country is Might Makes Right; or maybe We Make it Right with Might.

This has been called a “test case”–in other words, if this is gotten away with then anything imaginable may be perpetrated and “justified”.  Understand this, the evidence is unreviewed and secret.  In essence there could be no evidence.  It makes no difference.

The AP story is a good one and makes clear the consequences.  It does though, even in the face of these egregious abuses of state power, still speak naively regarding that assertion that “it can’t happen here.”

But in taking this step, the Obama administration raised questions about who else the president has the authority to kill. In principle, such an attack could probably not happen inside the U.S. because the CIA is forbidden from operating here and the military is limited in what operations it can carry out domestically. But civil rights groups have questioned whether the government has opened the door to that possibility. (my bold)

Can anyone actually believe that?  The reporter doesn’t: he writes that “such an attack could PROBABLY not happen” here.

How will Jon Stewart make this seem okay?  Can we be ironic about this?  Just another silly governmental “error” to caricature, right?  Insert prat fall, with noose.