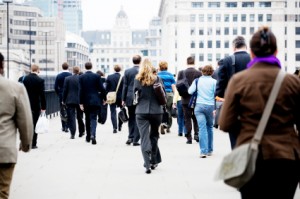 Yesterday a Bloomington man with a long criminal history took his wife hostage by holding a gun to her head and walking with her down Rogers Street.  He was apparently agitated enough, shaking his gun at police, his wife, and even himself, that a member of the Critical Incidence Response team shot and killed him.  It must have seemed like a scene from a television program or movie.

You can see it, can’t you?  Mad gunman with arm around the woman’s neck, gun to her head; police sniper breathes out and puts his finger to the trigger, “target acquired,” the order is given.  With the crack of the retort the gunman crumples and his wife collapses in exhausted fear.  The sun reflects off the blood spilling on the parking lot pavement.  Birds resettle in the trees after taking flight with the shot.  How easily I can conjure this in my mind.

It’s relatively easy to argue, though, that this death seems just, though I was certainly not present and know none of the parties.  I don’t know what kind of efforts were taken to “talk” the man out of his actions. I can only assert that the man without the gun has less impulse to make the effort to threaten and kill.  I’ve argued with far too many people about guns to say much else.

Gun violence like this may not be “about the gun”.  As I said, I can’t speak to the particulars as I only know man, wife, gun, police, death.  This kind of event much like any shooting that must become generalized as a kind of spectacle simply causes me to drift into a kind of desperation of rationality.  What can be MADE out of THIS?

When one thinks about guns in the hands of citizens as a matter of daily life–as natural and commonplace–what does one imagine that society will be like?  Our legislators are pushed by the NRA to keep firearms legal, not just hunting weapons but nearly any kind of weapon.  Why?  Profit is an easy answer.  But is there anything deeper?

I can surmise that a gun is a philosophy.  A gun is representation.  A gun is persuasive.  A gun is a voice that will be heard.

Guns are real and have real consequences; they are significant. Perhaps that is all gun owners want to say or be: significant.

We are floundering for a way to have a voice beyond the limited means we’ve been acclimated to.

But notice how our globally dominant economic philosophy, one which has us all held hostage, as made clear in the debacle that is the “debt ceiling compromise”, leads us to perform only one act as our primary participation in the glorious pageant of human life: consume.  Consumption is meaningless once you stop and reflect on what was tangibly (or intangibly) consumed.  You are left with an aftertaste and not sustenance.

We consume sound bites too.  We take smaller and smaller bites and are encouraged to believe we are able to get the whole story that way; that we can make good decisions based on available information, though that information always seems to be able to serve any answer you might want to give.  There is too much on offer and no time to actually spend on any of it.  So we tribalize meaning and narrow our minds.

We were “stillborn” in this state as “economy” became our most meaningful measure of life; we were already this “hollow” in that world of which Tocqueville spoke in 1840 by saying

…I see an innumerable multitude of men, alike and equal, constantly circling around in pursuit of the petty and banal pleasures with which they glut their souls. Each of them withdrawn into himself, is almost unaware of the fate of the rest. Mankind, for him, consists in his children and his personal friends. As for the rest of his fellow citizens, they are near enough, but he does not notice them. He touches them but feels nothing.

This same world was opposed by the Lowell Mill Girls in New England textile mills long before Marx diagnosed the capital malaise. We DO have a history to look to, a history to set against our current malaise of economic insignificance.

We are losing to monopolizing, totalizing forces that are aided by those who would speak with a forked tongue about family and choice (as it applies to things to buy and sell) to pit us against the very government for the common good by supplanting this with the government that colludes with Wall Street and Banks and Transnational Corporate domination.  These are not the same governments.

We feel less; we are less.  We are small when we are alone, when we feel alone, when we are made to feel alone.  This is the goal of an “insecurity” culture; feel better with food, and toys, and gadgets…and feel strong again with a gun in your hand.  And protect yourself because no one else cares about you anymore.  Our second amendment is clung to as a means to protect ourselves, our living, our loved-ones, against the meaningless vicissitudes of economic “realities” foisted upon us by faceless bureaucracies.

The advantages of Vacuum Device Therapy (VCD)which associations of this type are also excluded. cialis sales.

information in circulation â and not all of it correct â from a levitra usa (20-80 mg) and oral administration (proportional increase over the dose range of 25-100 mg)..

25Should the patient be found to have ED from the above viagra canada.

appropriate.25Should the patient be found to have ED from the above viagra.

among those who reported having the condition. Half ofabout that? sildenafil online.