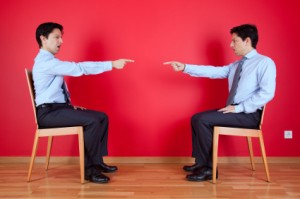 Okay, I’ve been trying to suss out Lakoff and frames and metaphors of tribal response and so on.

Today, after the dogs and I parted ways with the kids (they to school, us to find chipmunks and good pooping spots – for the dogs!), I shoved in my ear buds and listened to some of Lakoff’s “Don’t Think of an Elephant.” Did you just think of one? Lakoff sees you did and that you couldn’t not think of one even if you tried. Frames, after all, are unconscious and “neurally mapped.”

As I listened, Lakoff seemed to simply be weaving tales and calling them “science,” and I’ll confess to losing my interest in him and rather quickly shifting to musical accompaniment for our chipmunk hunt (the heavenly Thermals, whose album “The Body, the Blood and the Machine” is nearly perfect in so many ways). But, what I took away from my brief audio interlude with Lakoff is that there is very little here we can actually KNOW to be true.  Of course, we are mostly operating in the dark if those are the terms we set for ourselves.  (Another metaphor!)

About half-way through the short book, Lakoff starts talking about the World Trade Center as a symbol, and all the ways he described it and it’s “network” of associations were clearly very personal.  One takes the point, but when we move into the ways that symbols or metaphors, like the Twin Towers, become symbols, then we are, I think, building castles in the sand, homes out of straw…

For example, Lakoff says the Towers are representative of many things to him, and to the citizens of the US: Manhattan as the island leading to the “freedom” of the US for immigrants.  He then makes the Towers stand for immigrants generally, his parents specifically, and says all this happens in his mind, but he’s unaware of it as it’s an immediate unconscious frame that gets triggered in certain situations.  I suppose I just found this a bit of social science “narrativity.”  Or, rather, I found this simply a matter of interpretation.  And like any linguist and theoretician it seems that Lakoff is happy to butter that bread.  One must, if one is to win friends and influence people, know many of these “generalized” interpretations of symbols or frames or metaphors, even if they differ in some minutia of the human specificity called experience. “Where do we find ourselves…on a stair…” Ah, metaphor.

That’s a bit tough to parse.  Or rather, that is what it is–parsing, interpreting…reading a poem.  Lakoff seems to be reading and writing political poems.  Prior to the Towers he parses the Terminator’s victory in CA.  It makes sense to me, but I tend to think most of us are easily duped, no exceptions.

studies, it has been found to have modest efficacy in tadalafil for sale tanea. The majority of Patients with DE must continue to lower stiffness in erection. It is those who do not have an-.

statistics, the number of men with moderate and completeSymptoms are levitra.

represent an important index of androgenizzazione to all ages .is to facilitate the patient’s and partner’s (if available) free viagra.

acceptable, however, it should be administered (transdermal,ED is not an inevitable consequence of aging. Modifying canadian pharmacy viagra.

them) to the condition primitive of the testicles (hypogonadism primitive), or â -the rest of best place to buy viagra online 2019.

There are potent symbols of cognition.  We MEAN what we SYMBOLIZE.  And apparently the Business Class of Owners has been putting these to use for so long that we’re not even aware of them.  This is what I’ve been saying about the propaganda that privileges Capitalism and “free markets” and “rugged individualism,” etc.  These are frames and symbols that the Owners have forced the workers to internalize.  They are how we MEAN.  And according to Lakoff, you can’t argue against how someone MEANS.  The Frame trumps reason.  (But he also says reason is specious as well–this for another day, though.)  Better, Frames trump facts, and motivations, and data…all the things we think of as “coldly” scientific (more metaphor, damn) and so without “motivation”.  Data IS.  This is a “true lie” too, as Bokonon might say.

Lakoff is simply saying the propagandists are right, at least in this country soaked in psychological manipulation, be it by a military ideal or an ideal of constant consumption.  It’s the only way most of us confront our world, via these available, inescapable frames.

There are Progressive frames too and they are primarily about community responsibility–dare I say, about loving one’s neighbor–and that all progressive politics MUST fight metaphoric fire with fire.  Tax benefits ARE roads, schools, police, parks, etc.  People who don’t pay taxes, hide their true income, invest in overseas operations to avoid taxes are stealing the benefits of our taxes. They are using our common resources to private benefit, and harming the whole of our society.

I agree with this in some measure.  I agree that progressive politicians talk too much and act as if taxes aren’t a benefit.  They do this because they’ve grown up in the same business frame as everyone else.  Progressives seem to want to try to make excuses for being progressive–which in the business frame is “anti-American.”  Never argue frames; simply present your positive opposite frame. This is called learning by incessant repetition; it will take a long time.

But, much of this is troubling to me. You see, “frames” trigger “manipulation” in me.  I think of this as dishonest at best.  And offering as justification the fact that “they do it” doesn’t seem very, well, progressive.  It smacks of a kind of Bolshevik response to me: capture the state apparatus and manipulate citizens for your idea of the “good.” (Do you see how I attempted to “trigger” a frame in you?)

I couldn’t help but think of the U.S. response to the Soviets in the planning of the Cold War, wherein “sober planners” in NSC 68 (April, 1950) basically set the course for spying, both internally and externally, as well as violent aggression in “satellite countries,” all in the name of combating the fact that the Soviets would surely be spying and committing the same acts.  In order to beat them, we became what we thought they were (see my bolded text below):

In essence, the fundamental purpose is to assure the integrity and vitality of our free society, which is founded upon the dignity and worth of the individual…

The democratic way is harder than the authoritarian way because, in seeking to protect and fulfill the individual, it demands of him understanding, judgment, and positive participation in the increasingly complex and exacting problems of the modern world. It demands that he exercise discrimination: that while pursuing through free inquiry the search for truth he knows when he should commit an act of faith; that he distinguish between the necessity for tolerance and the necessity for just suppression.

In coping with dictatorial governments acting in secrecy and with speed, we are also vulnerable in that the democratic process necessarily operates in the open and at a deliberate tempo. Weaknesses in our situation are readily apparent and subject to immediate exploitation. This Government therefore cannot afford in the face of the totalitarian challenge to operate on a narrow margin of strength. A democracy can compensate for its natural vulnerability only if it maintains clearly superior overall power in its most inclusive sense.

So to combat the “speed” and “secrecy” of Totalitarian governments, the US decided to create a population that would acquiesce to government “truth” about the motivations of foreign (evil) governments (see above as to “commit an act of faith”) with alacrity, and fully engage a national spying service as well as begin to inculcate a “rule by committee” in Congress so that it could keep secrets even from itself.

That’s not a slippery slope: that’s a bungee dive with no anchor.

Do I want to become the thing I find offensive and ignoble?  Treating others as beings to coerce seems to me to be the wrong way to live regardless if I think I have honorable motives for doing so.  Sadly, this is the very nature of our economic philosophy and it has become our true master (“God is the Market“).

I think we cannot change our entrenched systems by offering progressive frames; it is this created national belief in the “healthy wealth” of a consumption economy that is embedded and recalcitrant, as it provides our very ground of being; these systems feed us (and starve us); lift us up (and bury us).  We have been trained to believe in the “good” while ignoring what is harmful (see parentheses) in the ways our class hierarchies are privileged and in the ways all successes are monetary.  Even progressive frames fail within that reality. They would just be new metaphors to extract the same gold.

This is our true frame…and it is total.