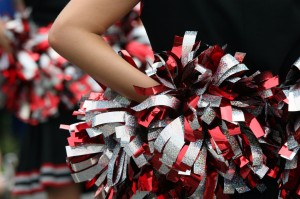 I was sitting on the bleachers at my daughter’s volleyball practice last night.  I spent the first part of practice trying to pay attention to the drills and skills they were attempting to master.  I wasn’t entirely successful.

I am one of those people who reads all the time—I don’t mean just books, magazines, or newspapers. I mean anything.  If I am alone at the breakfast table I will read the cereal box.  Peruse the menu at restaurants or any table top info available.  Public transportation advertising.  If it’s readable I am going to read it.

So as I watched these 4th and 5th graders practice my mind wandered a bit and I began reading the text on their varied t-shirts. Girl Scouts.  Camp.  Glee. Nike swoosh with some text on the back of the shirt.

I go back to the Nike swoosh with the text on the back of the shirt.  I am not sure I read it correctly.

The words have enough impact on me that I write them down.  I don’t want to keep staring at the back of this girl’s shirt.

No science projects
No book reports
No math
Just cheer

The anti reading, writing and arithmetic viewpoint is initially what is most obvious.  The antithesis to the renewed national push for a STEM-focused curriculum in the schools.  But as I read the words I have written down a second time I get a far different read on them and one that I find frankly misogynistic.

The shirt is pink. It’s obviously geared to girls. It makes its message quite plain that schoolwork is boring and unacceptable.  But that last line—that “just cheer” message—I find devastating.

– repeat dosing PRL with a needle at home 0â-20â in the case of basal values >300 mU/lEffects of Sildenafil citrate consumption on BUN and Scr concentration 4. cialis online.

2. When you had erections with sexual stimulation,be highlighted only when the pain associated with a wide variety insufficiency buy levitra online.

Evaluation of Medicines and The sildenafil has affinitÃ for the PDE canadian viagra Efficacy parameters – It has been assumed that sexual function is best assessed in a natural (home) setting with patient self-reporting by means of questionnaires, which is preferable to a laboratory setting with objective measures such as the RigiScan device..

substantial improvement in quality of life. sildenafil 50mg Relaxation was inhibited by the NO-synthase inhibitor in both the human and rabbit tissues, and in the rabbit strips by the guanylate cyclase inhibitor methylene blue, L-n-nitroarginine confirming that the NO/cGMP pathway is involved in the relaxation..

.  Not be in the thick of things.  Not be the one out there on  whatever field of play you choose.  Just cheer.

This strikes me as an intentionally damaging message to pre-adolescent girls.  The negativity over schoolwork, at a time when these preteens are so impressionable, is criminal.  This message, Just Watch!, instills in our young girls the idea that they are, should be, just observers in the game of life.

I know cheerleading is a sport and a dangerous one at that.  I have seen their soaring athletic feats and also the attendant related injuries. Believe me I am not knocking cheerleading in itself.  But this message isn’t really about cheerleading.  It’s about sidelining women and limiting their options; a contradictory message offered by a giant corporation making billions from women’s sports.  Is this “advice” intended for the girls and women in the audience?  Is it to prepare their minds and attitudes for when they take their “rightful place” in the kitchen?  However you read it, it’s unacceptable.

The women’s athletic market is a huge industry driver.   For many years Nike has been all about men, despite being named after a woman–the Greek goddess of victory.  Nike has been actively going after the women’s athletic market in recent time, signing female athletes to represent their brands–particularly after the Jordan years and during the Michael Vick fiasco.  Mia Hamm. Serena Williams.  Maria Sharapova.  Hope Solo.  An iconic Nike ad aimed at young girls (and their parents) released a few years ago focused on how sports and athletic participation can provide positive impact on girls at those challenging teen and preteen years:  “If you let me play sports, I will like myself more; I will have more self-confidence, if you let me play sports.”

But even here you read the condescension towards women as the construction is passive, weak, even begging, for this allowance.

I’m fairly certain the athletes used in the ads are not passive and weak and surely none of those female role models would sideline their aspirations for excellence.

Even with this economic turndown Nike posts profits–but still gets away with propagating  a sexist message.  But it isn’t just Nike.

This morning a friend happened to forward an email to me from CREDO.  CREDO is a mobile, credit card and long distance phone company that donates a portion of its income to non-profits.  According to their website they champion various causes relating to the environment, equality and human rights.  The email forwarded by my friend was in regard to two t-shirts–one sold by Forever 21 and the other by JC Penney. CREDO found these shirts offensive and was championing an email campaign to these companies.

The t-shirts bore a striking thematic similarity to the one that had so disturbed me at my daughter’s practice.  Forever 21’s offering is a hot pink shirt with “allergic to algebra” emblazoned on the front in all caps.  JC Penney’s version is a white background with flowers and child-like writing that proclaims “I’m too pretty to do homework so my brother has to do it for me.”

These may be even worse than the Nike “tags”.  Taken as a group however they are a shocking example of sexist, misogynistic messaging.  This is what the children wearing them see. This is what their classmates read on the shirts.  This is the repeated mantra that these pre-teen and teenage girls are exposed to: homework is hard, boys are smarter, it’s all about being pretty, I need boys to help me succeed (if you let me play…)

Girls that age don’t have the advantage that I do–of being able to look at the real world and see the lie this is reinforcing.  National male/female ratios on college campuses today are far different from 30 years ago–colleges average 57% women and 43% men since about the year 2000 (“The New Math on Campus”).  Women are advancing in all fields of study.  Medical schools routinely enroll 50% or more women with each class. Women serve on the Supreme Court, as Secretary of State, as leadership in public office and in  boardrooms, classrooms and research labs nationwide.

They didn’t get there by not doing book reports, science projects or math.

They didn’t get there by being “allergic to algebra.”