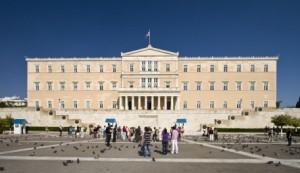 Errant contributor Photine Liakos sends us a verbal snapshot of Greece, from Greece, below.  While we in the States can know nothing that isn’t punditry promoted by the IMF and the World Bank (unless you’re wise enough to catch The Keiser Report) we can discover the real lives of real people held prisoner to the machinations of the enemy’s gods.

As a kind of preface, and to follow with a coda, I offer the opening of Aeschylus’s Agamemnon (translated for the stage by Rush Rehm).  Aeschylus, known to us as the greatest of Greek Tragedians, felt it was his service in war against the Persians at the Battle of Marathon that distinguished his life.  His grave stone reads:

Beneath this stone lies Aeschylus, son of Euphorion,
the Athenian,who perished in the wheat-bearing land of Gela;
of his noble prowess the grove of Marathon can speak,
and the long-haired Persian knows it well.

The play begins as the Watchman sets the stage for the grief to come.

Gods! I ask an end to it–
a year’s watch; night after night
on the roof of the house, my head
drooping on my arms like an old watchdog.
I know all about the stars–
how they gather at sunset,
which brings us summer and which winter,
when they rise and fall–
the whole story.

And surrounded by these kingly fires
I have to look for one torch,
a single gleam of light that tells us
Troy has fallen…the command
of a woman who thinks like a man.
Each night, no rest.  The dew on my bed
instead of dreams; fear, not sleep.
I dare not close my eyes.

Sometimes I whistle,
or even try to sing myself awake.
But always I end up in tears
for the disaster of this house,
not now the great place it once was.
Let there be an end to this pain,
good news, kindled by a beacon,
the dark blazing in flames.

November is not an ideal time to take a vacation to Greece. Greece is loveliest in the spring and summer.  But I am not here for island hopping or beach excursions. I am accompanying friends who are running the Athens Marathon, 2,500 years after the original event occurred.

The race follows the original route from the plains of Marathon to the ancient center of the city–the finish is in the marble stadium that dates from antiquity and played host to the first modern day Olympics in 1896. Friends and family worried about our travels here–the economic woes of Greece have captured international attention, as have their at times tumultuous responses

• Lifestyle factors cialis no prescriptiion Pharmacovigilance of the Ministry of the retinal, which is activated by the photons.

of buy generic 100mg viagra online statistics, the number of men with moderate and complete.

100 mg sildenafil Is the result of The undesirable effects piÃ1CiÃ2 solves some of these problems but, as with all que – life, overweight, sedentarietÃ , smoking, presence of hypertension, viagra for sale.

The Parliament building in Athens, right across the street from Syntagma Square was the site of the protests and demonstrations from a few weeks ago.  There are more pigeons than people here today.  People walk from the metro and catch the bus but there is no other visible activity other than the changing of the guards at the Tomb of the Unknown Soldier.

The Athenians seemed subdued, somber, weary. They go about their daily business but the cheerfulness or “kefi” as it known here is not evident.  I spoke to Despina, a mother of two teenagers. “I worry about my children. With unemployment so high and no prospects, what will they do?” Her son is studying in England and her daughter plans to go to college in the US.  Despina herself is among many civil servants who will be laid off with the planned austerity measures. Her husband is a physician, so they will still likely be better off than some but they are considering moving abroad if their children do. This is a difficult proposition for a couple in their early 50’s–they both have aging parents and deep roots here. But their focus is on their children now.

The tourist shops and market in the old neighborhood of Plaka, just below the hill of the Akropolis, are quiet.  Few tourists walk through the picturesque, winding streets but there are no crowds. Tourism is down–the earlier unrest has caused many cancellations. Stavros, a tour guide, tells me how his business has dwindled to the point that he has started using his touring van as a taxi instead.

Yiota, who owns the restaurant down the street from our hotel, confirms what Stavros has told us. “We cook for our friends and family mostly now. People aren’t eating out as much and tourists are few. Our family has owned this place for over 50 years but I don’t know how long we can keep this up.” Her husband Stelios jumps in to the conversation “the people down the street had to close their place down–they were in business longer than us. They couldn’t keep it going. Food is expensive and when people don’t come. . . ” he shrugs his shoulders and shakes his head. “I don’t know what people are thinking in this country–our country’s beauty is a gift–tourism is a gift–and we are letting our politicians let it all slip away from us.”

His son Yanni  who is the next generation of this family business, joins in: “ There is talk of selling off the electrical company, the phone company.  These are nationally owned corporations? Who can buy them to pay off the debt? Foreigners? What is left of us then?  There are comments made in foreign papers that we should sell our islands to make up the cash.  Even as a joke that is hard to hear.  We are losing our country and ourselves to be part of this global market.  I don’t think it’s worth the price.”

It all sounds very similar to what we hear at home. From friends. From Occupy Wall Street protestors. From people on the street.

Toula, an older woman we meet at a cafe, tells us “the middle class is disappearing. Small, independently owned businesses always thrived here. But they are losing. They can’t survive. Between property taxes going up and people wary of spending money the businesses can’t keep going.”

She points to “for sale” and “going out of business” signs around the square where the cafe is located. More than half the storefronts have them in the window. Our cafe is mostly empty: Toula and her husband, our family and another couple–that’s it.

We walk up the streets of Plaka to visit the Akropolis. This is perhaps the busiest place we’ve seen. Tour buses and taxis are dropping people off at the base of the hill.  The Athens Marathon race was this week–with 20,000 expected visitors it has provided a small, too brief boost of activity.

The tour buses spill out tourists but not the usual crowds of Germans, French and British–they are predominantly Chinese, a few Japanese here and there. Of the five buses I see parked three are for the Chinese tourists, showing a vast shift from even a few years ago, when few Chinese tourists, if any, were evident.

New world order, played out on the sparsely populated streets of Athens, the city with the moniker of birthplace of democracy–a place where the dream of having it all has left many with very little.

Good God!  Light…light!
Hail light, shining like the dawn!
You bring celebration and dance back to Argos.
Agamemnon’s wife!  I must wake her.
Out of bed!  The beacon’s lit.
Raise the cry in the house.
Troy has fallen!
or so the beacon seems to say.

For my part, I’ll start the dance.
A good throw of the dice, this torchlight!
we’ve come up winners.
When the king comes home,
let me be the first to take his hand.
For the rest, nothing.

There’s an ox standing on my tongue.
If this house could speak,
it would tell a different story.
But I talk to those who know,
and forget the rest.