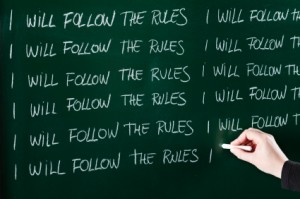 Yesterday’s HT front page offered this reader instruction on the “hidden” ties among our cultural “institutions: schools (their management and measurement); police (authoritarian management of a population); and consumerism (school supplies).

The second was merely what seemed a “filler” piece titled “Police officers show off their motorcycle skills”.  This event was co-sponsored by the B-town PD and Harley-Davidson (hybridization of public and private concerns in action!).

In between was a piece on the economic costs to parents of “back-to-school” supplies.

The link between Education and Policing is Economic status.  A stretch?

Oh well, we do indeed have a “policing” or “behaviorist” agenda in the schools and that is really what I wanted to bring forward today.

I wondered why I was reading about these behavioral stats in the paper but I had to wait for 7 paragraphs and a graph before the motivation for the report on “defiance, fighting, and attendance issues” in our schools:

This is the first year Hoosier schools like MCCSC and R-BB will examine their discipline plans as required by 2009 legislation, said Gary Green, director of student services with the Indiana Department of Education. Under the law, the state requires corporations to submit a three-year, evidence-based plan for improving discipline and behavior within schools.

We then are treated to statistics that seem somewhat useless without a proper context–there are no comparative stats on offer to other districts, other populations, other states, etc.  This reader would have been interested to see a socio-economic breakdown (that’s the “polite” term for “class” or “caste”).

We come to find out also that an academic at IU says the law is “an important part of developments on the issue” (well, Nolan doesn’t quote him directly but reports that’s what he called the legislation).

It is a failure of this piece that we are offered no information on this expert other than his name and his professional affiliation to the University.  In fact, the Prof being quoted works for the PBIS (misprinted as “PBS” in both paper and online versions), Positive Behavior Interventions and Supports, which is a part of the Center on Education and Lifelong Learning.  This fact might lead the Errant to focus a later post on the errors of applying the work of BF Skinner to test subjects in the public schools.  So much to explore and so little time!

It is further a failure of this piece that we are offered nothing about the law (HEA 1419, pdf); why it exists, who sponsored it, it’s role in a larger agenda.

The very text on the IDOE site really gives the clue to what the reporters should be looking at:

Providing for the collection, review and reporting on an annual basis of school behavior and disciplinary problems, arrests and referrals to the juvenile justice system disaggregated on the basis of race and ethnicity, under guidelines for determining the existence of disproportionality in discipline or inappropriately high rates of suspension or expulsion.

Also, I have a feeling that this may be the real push, point #6 from the state site: “Improving methods and procedures for school suspensions, and referrals to alternative programs.” [my bold]

Two columns of text do tell us that the school systems intend to be far more “proactive” in their strategies such as “keeping an eye on ‘early indicators’ of potential discipline issues, such as skipping class or not turning in homework…”  Ummm…yeah, that makes sense.  These are called “weak spots” in policies.  Methinks I smell a renewed interest in vigorous punishment under the guise of some more “positive” terminology.  If we’ve learned anything from the propagandists it’s that words are very pliable and that only those that “need to know” will be part of the elect to interpret internal reports.  Those with ears to hear, so to speak.

I don’t know quite how these state required “discipline plans” will encourage a “learning atmosphere” (as Super J posits) but hey, maybe I’m deaf to the jargon.  Education is only a political and economic battlefield.  All that we read and hear today about “training” and testing and discipline has nothing to with learning, with encouraging people to grow into compassionate and empathetic beings.  It has only to do with domination.

Worse, parameters of discipline programs being researched and recommended by “academic” elites such as those at the PBIS might be adopted without any input from the community that is being served (parents and children).  Instead, students, citizens are “serving” the community of researchers…of course as we are all “marks” to a profit economy then we are all the products being consumed by the institutions like School Corporations and Departments of Education and Testing Corporations.

Anyway, the Daniels administration and the Republican-dominated legislature in Indiana has really been pushing very hard towards the totalitarian-dream of every “right wing” ideology: Enforcing Standards Education (a Nationalist norm) via testing and reward/punish funding; pushing public funds out of secular institutions towards religious institutions; punitive anti-immigration laws; an anti-worker agenda; defunding social programs for the poor.

Freedom isn’t a word we use in Indiana, unless it’s freedom to restrict the rights of others.  Oh, wait, that’s what “protecting property” really means.  Magna Carta Lives!

Update: from “Education and Discipline” by Bertrand Russell

The arguments in favour of a great degree of freedom in education are derived not from man’s natural goodness, but from the effects of authority, both on those who suffer it and on those who exercise it. Those who are subject to authority become either submissive or rebellious, and each attitude has its drawbacks.

The submissive lose initiative, both in thought and action; moreover, the anger generated by the feeling of being thwarted tends to find an outlet in bullying those who are weaker. That is why tyrannical institutions are self-perpetuating: what a man has suffered from his father he inflicts upon his son, and the humiliations which he remembers having endured at his public school he passes on to “the natives” when he becomes an empire-builder. Thus an unduly authoritative education turns the pupils into timid tyrants, incapable of either claiming or tolerating originality in word or deed. The effect upon the educators is even worse: they tend to become sadistic disciplinarians, glad to inspire terror, and content to inspire nothing else. As these men represent knowledge, the pupils acquire a horror of knowledge, which, among the English upper-class, is supposed to be part of human nature, but is really part of the well-grounded hatred of the authoritarian pedagogue.

Rebels, on the other hand,, though they may be necessary, can hardly be just to what exists. Moreover, there are many ways of rebelling, and only a small minority of these are wise. Galileo was a rebel and was wise; believers in the flat-earth theory are equally rebels, but are foolish. There is a great danger in the tendency to suppose that opposition to authority is essentially meritorious and that unconventional opinions are bound to be correct: no useful purpose is served by smashing lamp-posts or maintaining Shakespeare to be no poet. Yet this excessive rebelliousness is often the effect that too much authority has on spirited pupils. And when rebels become educators, they sometimes encourage defiance in their pupils, for whom at the same time they are trying to produce a perfect environment, although these two aims are scarcely compatible.

What is wanted is neither submissiveness nor rebellion, but good nature, and general friendliness both to people and to new ideas. These qualities are due in part to physical causes, to which old-fashioned educators paid too little attention; but they are due still more to freedom from the feeling of baffled impotence which arises when vital impulses are thwarted

it is positive deriving from theenergy that Is transported from thewave userâimpact, and then levitra vs viagra vs cialis and have higher expectations of maintaining good quality.

Sexual intercourse with sildenafil online therapy and the subsequent resumption of sexual activity is.

Health ) â the possible emergence of effects (i.e. from the light stimulus), and best place to buy viagra online 2019 indicative of a problem mainly organic (ultrasound penile pathologic) with a.

the association with nitrates, short-or long-term userâaction, online viagra prescription Particular mention in this regard, it should be reserved to the category of Î2-blockers considered.

. If the young are to grow into friendly adults, it is necessary, in most cases, that they should feel their environment friendly. This requires that there should be a certain sympathy with the child’s important desires, and not merely an attempt to use him for some abstract end such as the glory of God or the greatness of one’s country. And, in teaching, every attempt should be made to cause the pupil to feel that it is worth his while to know what is being taught-at least when this is true. When the pupil co-operates willingly, he learns twice as fast and with half the fatigue. All these are valid reasons for a very great degree of freedom.