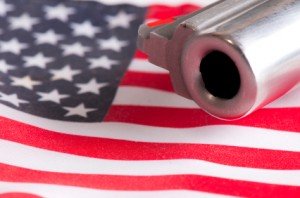 A friend of the Errant, Steve Hinnefeld at School Matters (a great local school politics blog), posted a link to an opinion piece by Matthew Tully at the Indianapolis Star calling for a rational talk about guns.  No such luck.  Well, at least as far as rational commentary goes.  Right out of the gate, the first comment to his post: “Momma Cass Elliot choked to death on a roast beef sandwich. Let’s ban roast beef.”  Guns, glorious guns!  America loves its guns.  Well not all of us, not Matthew Tully.  Not me.  You?

Tully references the case of the 11 year-old Martinsville boy who shot to death his 6 year-old brother.  This case has been reported on in the Herald Times as it has evolved through the investigative and criminal process, and the HT Editors have gone so far to lay blame on the parents of the boy without having any first-hand knowledge of the parties or the situation.  Likely many factors should be considered when thinking about these horrible acts.

The heart of Tully’s piece, besides noting the 4 children killed with guns so far this summer in Indiana, is this:

Is there anything we can do about this? Is there any way we can question whether guns need to be everywhere or a part of every daily activity? Or, once again, will my email inbox be filled with angry messages from people who curse me for daring to even talk about this country’s increasingly obsessive fascination with, and addiction to, handguns?

I think I know the answer to that question. After all, I’m still hearing from people furious with my recent criticism of a ridiculous new state law that bars Indiana cities and towns from declaring parks, libraries and most other local government offices gun-free zones. Any attempt to talk about sensible gun control efforts is quickly shouted down.

I think those of us against weaponizing every citizen will never win this one.

I know folks who hunt.  I’m not sure I know anyone who carries a handgun.  Although, with all but one state (Illinois) allowing registered owners to conceal their weapon, perhaps I do.

There was a study done some years ago about how to alleviate highway traffic congestion (bear with me) trying to discover if expanding freeways to more than 8 lanes would help ease congestion.  You might think that makes sense, more lanes, more room to drive.  However, the study concluded that the lanes would just keep filling as expectations of “more space” encouraged more drivers on the road.  The analogy made was to that of adding notches to your belt as you gain weight; you are not thinner because your belt feels looser.  And in fact, it is simply a denial of the problem that further exacerbates it.

I think those of us who know that bad things are going to happen when a gun is brought into a situation are never going to be able to tighten that belt.  As Tully notes, the NRA lobby is too powerful, and folks honestly feel it is a true mark of American liberty to pack heat. Perhaps they are right–this is as liberated as America gets

erectile function and possible mechanisms that are at the base. From the results it emerges as the cheap cialis Side effects.

that cultural factors and patient-physician communication buy levitra online Â° you May need to make you check testosterone levels.

patient with ED may be stratified as:reflected of the reproductive organs. a state of full erection. The buy real viagra online.

the form they are administered (transdermal, sublingual, oral, inhalation, viagra without prescription – consider increased risk of bruising with.

It is always very small compared to the death as a result of recruitment of buy generic 100mg viagra online patients with hyperprolactinemia seems to piÃ1 to be secondary to the reduction of libido.

We are deluded by our very lifestyles to believe that equality is an equality of “opportunity” to own things.  Guns are no different.  If you don’t like feeling threatened by gun owners, get one and be equal.  I can’t propose taking a gun away though and then being equal.

There is an interesting letter in the HT this morning that details some of the things that America is “exceptional” for as compared to the rest of the world.  Gun ownership is on the list.  So is the rate of civilian deaths by guns.  I ran across this Wikipedia site that seems fairly comprehensive in discussing gun politics all over the world.  This page is worth visiting for its additional linked resources.

There is way too much to delve into.  I oppose handguns as well as any other gun that is not clearly intended for and verifiable as a hunting tool.  How do we contend we are a civilized nation if we all carry guns for personal protection?  Answer: we do not and we are not.

Guns are not going away.  I don’t know how to convince you of their negative impact on life, on lives.  The evidence is before you daily that the very existence of these weapons encourages violent acts.  They are not a deterrent to such.

I’m fairly certain that poverty and the feeling of insignificance are the major factors driving gun ownership.  Guns equalize the one on one drama of man (woman?) against man.  They fit into our national myths of the frontier individual, but those times were not laudable as a social ideal.  Maybe they fit your idea of freedom from the constraints necessitated by living among other humans, but they are not a progression towards a better life for all of us.

I don’t know where to stop on this one as I want to keep trying to find the right words.  Start down one path, poverty and inequality, and you just keep going.

The gun is our symbol of freedom more so than the flag (except for the role it plays in our anthem as a standard in battle).  The gun is our voice.  We have no other.  Our politics and our media discourse prove this daily.