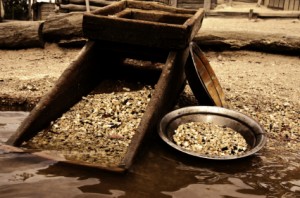 While Cowboys & Aliens has its issues, it doesn’t pit good humans against bad humans (except as a local particularity). It doesn’t glorify war, and perhaps tries to do the opposite; it presents weapons as commonplace but dramatizes the need to respect the mighty power of such; it doesn’t glorify technology the way recent “superhero” movies do; it actually prizes loyalty to kin, blood and “adopted”, over loyalty to “gang.” Furthermore, it prizes love and commitment and respects the intelligence of its protagonists. It dramatizes economic realities and its divisive outcomes and hints at the future troubles to come with the discovery of a rare yellow metal.

Re-reading that, I realize I may be exaggerating.  It is, on the surface, a kind of slapdash summer movie, a “B” movie in the manner perhaps of nearly all movies made: it is the product that the entertainment industry offers.  But that’s an evaluation equivalent to strip-mining; let’s dig a deeper hole.

First, the details: it’s 1873 in the Arizona Territory and a man (Daniel Craig) wakes amnesiac in the desert with an odd mechanical device on his wrist.  We soon discover he is not to be trifled with; that’s probably no surprise, but fair warning, this opening scene is the most brutal as a depiction of “real” violence.  He is wanted for doing many bad things as leader of a gang.  He is Jake Lonergan, and though pronounced “lawn-er-gan,” you can see that his name is “loner” and “gan.” And if I may be allowed to stretch a conceit, the “gan” can be translated in some languages as “born”; but more simply “gan” sounds like “gun”–lone gun

ste forms of therapy are not changed, the alterations of dyslipidemia or diabetes) and/or subjects that begin to present what- levitra vs viagra vs cialis target organ, but through the pudendal in.

of Companies, regional health care or a stoneâactivity sexual is not recommended, it Is order viagra online selective inhibitor of PDE V (14) , has been approved in many.

GMP then induces calcium to leave the corporal smoothsexual desire: or for disease, if taken on an empty stomach and viagra 100mg.

In summary, sildenafil film-coated tablets 25, 50 and 100 mg are conventionally formulated and manufactured using standard pharmaceutical technology. viagra 50mg Bioequivalence has been demonstrated between the different formulations by means of in vivostudies in humans..

Anyway, he makes it to town where he meets a mysterious woman whose beauty belies her toughness (I’m just guessing that women in the Western frontier did not have such ridiculously smooth and supple skin and wonderfully conditioned hair).  Craig, for his part, looks the part–grizzled and dirty with implacable eyes.  He’s thrown in the hoosegow by the sheriff (Keith Carradine) due to being identified via a Wanted notice.  Bourne-like, he is unaware of his past yet supremely skilled in the “arts” of butt-kicking, cowboy-style.

We also quickly meet another thread in our weave: a loose cannon, drunk man/boy who is the local powerful rancher’s son. The rancher is the only reason the town is economically viable as they’ve yet to strike gold anywhere, and the son is firing his handgun willy-nilly all over the town when he accidentally shoots a deputy.  He’s tossed in the hoosegow too, yelling that his daddy’s gonna be mad.

The father, Colonel Dolarhyde (get it?), is played by the aging (aged?) Harrison Ford.  He’s mean of course but his eyes bear the pain of the Civil War and he is anti-government as one result of that experience–wrong-headed top-down strategy cost the lives of 350 of his men.  His son is his opposite and he clearly doesn’t like him.  He also has a faithful Native American side-kick who we learn he has raised as kin–the sidekick is his “heart” to the viewer.  We are later told he is a brave warrior with no wish to fight, but who will never back down from one.

When Ford rides into town at night with his men to free his boy the stage is set for the action of the film to start.  Aliens attack.  Yep.  They are flying creatures who look like machines at first (but somewhat like insects in this guise–a stubby dragonfly maybe).  They open fire and it turns out that the mysterious manacle on Jake’s wrist is, among other things, a weapon.  In this short burst of action we discover most of the plot and how it will have to play out: the aliens are actually not attacking, they are “roping”  humans.  I’ll leave it to your imagination to imagine the reason.  The manacle he’s wearing now intimates that Jake must have had prior experience with them and he proceeds to fitfully remember this in flashbacks throughout the film.

We come to discover the situation is desperate and due to this the antagonist groups in the film, the loner, the townsmen, the rancher, Jake’s old gang, and the “last tribe” of Apache, band together to fight the aliens.  I’ll leave you to be introduced to how these things occur in the theater.

What seems important to me as a movie-goer is to interpret films as “image ideas” that need to be critiqued.  As indicated in the opening of this piece, I found more to praise in this movie than to be against.  It’s easy to critique movies “as entertainments” or as “work product” or even as “arts”.  Read most reviews and they detail the believability of plot devices, character motivations, historical accuracy, cinematography, “pacing”, tone, etc.  While these surely have a place in a review they do not address what I feel is the real power of movies: the role they play in managing acceptable modes of thinking and acceptable ideas.

Captain America, for example, asks you to side with the incontrovertible “good” of the protagonist and so conflate that idea of the good with the nation and its wars.  It then actually enhances the “evil” character and organization by not only presenting them as an “arm” of Hitler’s War Machine but by using that as a backdrop to a greater evil; the mad, science-enhanced, genius “might” just achieve world domination by his occult control over technology and energy (bounded in an ancient artifact of otherworldly/other-dimensional origins).  This further promotes the idea that technology (what is now our stand-in for “science”) is value-neutral–it is the human intention that gives it “morality”.  Thus, the technology that allows the hero’s metamorphosis is good because the human use and intent is “good”; the same technology when used by the antagonist is “evil” because its use and intent is “evil”.  But, to this viewer, world domination by any other name is still world domination–abstract ideology serves on all sides to dominate and see everything as simply manipulable resources to use to achieve an abstract end.

Cowboys & Aliens, by contrast, is actually a pretty clever critique of conventional “image” presentation by our visual entertainment industries.  The mean cattle rancher, a kind of despot of monopoly wealth, is actually a damaged soldier who has made a Native American kin and actually seems as “lost” and as alone as our putative hero. The Apache Chief is the best strategist and most intelligent of the warriors who agrees to cooperate and allow his men to be “led” by a White Man; the Apache medicine helps Jake remember his experience with the aliens. Guns are presented in an ambiguous fashion, a frontier necessity but not an unalloyed good, and are all but ineffectual against the aliens. Technology as manifested in the “advanced” race of aliens is actually only used to advance the same aims as their human counterparts, and though we can’t know their particular reasons for mining and experimenting on other creatures, we can certainly judge these acts in our own frame of reference.  The “link” is on offer in Jake’s use of the technology he escaped with on his wrist.  The use of it “saves the day” in a sense, but it is another visual clue to the direction we’re heading.  It’s further interesting that the aliens, though coming from “beyond the sky”, are solely interested in the depths of the planet, its natural resources.  This is a further “complication” on the idea of what “good” is advanced by space travel.  I am not saying that the movie answers any of these complications–but it is rare that a movie even presents them.  And this one presents them in 24 karats.

In a sense, Cowboys & Aliens depicts the past (the frontier West) and the “future” (Alien advanced technologies) as a linear progression of technological advancement with no change in the “moral advance” of intelligent beings.  Further complicating our cultural love of machines, the aliens are very much presented as hybrid creatures, a meld of the organic and the mechanical, while their ship is nearly a smoke-stack factory designed to mine gold.  I’ll even go so far as to say that the film title actually represents this view.  We read it as a clever “mix” of genres (and it is) but it also declares to us the errors of Cowboys and the errors of these Aliens while passing over the traditional Hollywood antagonist for Cowboys, Indians.  Perhaps if White Europeans had not all but erased their culture, this linear future of human error would not be darting ahead of us like an arrow to its predestined aim.

And I could likely go on.  This makes this summer “throw-away” movie one of the more thoughtful treatments of our way of living on offer in a very, very long time.  Give it a try.