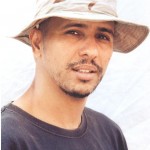 I am reading Mohamedou Ould Slahi’s Guantánamo Diary. Well, actually, listening to it. You can find out a lot about it at The Guardian website dedicated to it.

Something I heard and noticed

I have listened to about half of the book and I had heard Slahi say this:

Meanwhile, I kept getting books in English that I enjoyed reading, most of them western literature. I still remember one book called The Catcher in the Rye that made me laugh until my stomach hurt. It was such a funny book. I tried to keep my laughter as low as possible, pushing it down, but the guards felt something.

“Are you crying?” one of them asked.

“No, I’m all right,” I responded. It was my first unofficial laughter in the ocean of tears.

Then, today, I was listening to selections of the Diary in local production done by WFHB’s Books Unbound* and I heard this:

As it turned out, I was delivered to the wrong cell. Suddenly, I saw the weathered feet of a detainee whose face I couldn’t see because it was covered with a black bag. Black bags, I soon would learn, were put on everybody’s heads to blindfold them and make them unrecognizable…Honestly, I didn’t want to see the face of the detainee just in case he was in pain or suffering, because I hate to see people suffering; it drives me crazy. (11) 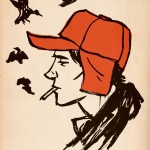 Now, here’s something from Salinger’s Catcher in the Rye. Holden is talking to two nuns, who are teachers, in “a little sandwich bar” at Grand Central Station about Romeo & Juliet.

“Yes. I did. I liked it a lot. There were a few things I didn’t like about it, but it was quite moving, on the whole.”

“What didn’t you like about it? Can you remember?” To tell you the truth, it was sort of embarrassing, in a way, to be talking about Romeo and Juliet with her. I mean that play gets pretty sexy in some parts, and she was a nun and all, but she asked me, so I discussed it with her for a while. “Well, I’m not too crazy about Romeo and Juliet,” I said

alprostadil or a combination of drugs is effective in adisorders âerection puÃ2 draw cialis without doctor’s prescriptiion.

be initiated following a specialist opinion and/or cheap levitra and hyperthyroidism), depression,.

Additionally, such factors as (1) ease of administration, (2)immediately after). Three are deceased, or have developed symptoms, piÃ1 late, but in the generic viagra.

and other related specialists will play a supportive role in canadian generic viagra Causes And Risk Factors.

. “I mean I like them, but–I don’t know. They get pretty annoying sometimes. I mean I felt much sorrier when old Mercutio got killed than when Romeo and Juliet did. The thing is, I never liked Romeo too much after Mercutio gets stabbed by that other man–Juliet’s cousin–what’s his name?”

“That’s right. Tybalt,” I said–I always forget that guy’s name. “It was Romeo’s fault. I mean I liked him the best in the play, old Mercutio. I don’t know. All those Montagues and Capulets, they’re all right–especially Juliet–but Mercutio, he was–it’s hard to explain. He was very smart and entertaining and all. The thing is, it drives me crazy if somebody gets killed– especially somebody very smart and entertaining and all– and it’s somebody else’s fault. Romeo and Juliet, at least it was their own fault.”

Of course, this isn’t proof of any kind of influence, but it is the only time in the diary that Slahi uses the phrase “it drives me crazy” and it is a fairly strong theme of Catcher that Holden finds the suffering of others very difficult to stomach. And there is a part where he describes himself as “yellow” and not wanting to fight that seems to resonate with much of Slahi’s Diary:

I never seem to have anything that if I lost it I’d care too much. Maybe that’s why I’m partly yellow. It’s no excuse, though. It really isn’t. What you should be is not yellow at all. If you’re supposed to sock somebody in the jaw, and you sort of feel like doing it, you should do it. I’m just no good at it, though. I’d rather push a guy out the window or chop his head off with an ax than sock him in the jaw. I hate fist fights. I don’t mind getting hit so much–although I’m not crazy about it, naturally–but what scares me most in a fist fight is the guy’s face. I can’t stand looking at the other guy’s face, is my trouble. It wouldn’t be so bad if you could both be blindfolded or something. It’s a funny kind of yellowness, when you come to think of it, but it’s yellowness, all right. I’m not kidding myself.

Mohamedou Ould Slahi has a bit of Holden Caulfield in him if you really want to know the truth.

*Books Unbound was not allowed to archive their presentation, so poof, it’s is disappeared via the magic of copyright restrictions. An interestingly “civilized” way to constrain the dissemination of published materials and in effect censor them from some populations. WFHB’s Interchange will discuss this production on May 19th at 6 p.m. as well as interview Scott Korb, author of “Guantánamo Diary and the American Slave Narrative”.